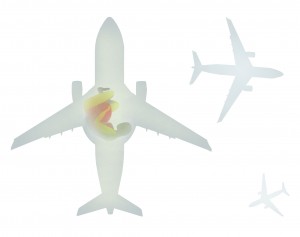 I arrived at the airport an hour early and stood in the security line, sweating and feeling like I had to vomit. The TSA agent rifling through my purse asked about the pills.

“—And does this machine give off radiation of any kind? Perhaps I would be better suited to that line.” I gestured toward the exponentially shorter express lane that featured a simple metal detector.

“Because I am pregnant, and the doctor said that radiation has the potential to retard my child’s brain growth.”

“Ma’am this machine will not make your child retarded, now please step over.”

The plane boarded and a man with greying hair sat next to me. He was cloaked in an age-inappropriate fragrance and I became certain that I was going to vomit. As the plane ascended I vomited, then began to fall asleep and thought about how the plane was like a boat, crossing over streams of air that wove into one another, splitting them apart like millions of threads.

I woke up sometime in the middle of the flight when I realized there was an arm reaching across me to close the plastic window shade. In my half-sleep I briefly thought the arm or the gesture of slapping the shade shut seemed familiar, like I was having déjà vu. Once it was closed, and the hand retracted I looked at the man sitting next to me who had shut his eyes. He leaned back, as much as the 3.5” reclining radius would allow and appeared relaxed. I opened the shade again and began to read. The man sitting next to me spoke:

“Can I show you something?”

I tried to think of what to say. The question sounded unnaturally simple to me and I was afraid of the consequence of either possible answer.

He clicked an icon on the desktop of the computer sitting on the tray table in front of him. He clicked into a folder, and opened a document. The document was a list of names with dates next to them. For a moment I stared at the white light pooling over the front of his polo shirt.

“Now, after I show this to you, I want to ask you a question.” I nodded and he turned the screen toward me.

“These are the names of infants who died while waiting for a heart valve transplant.”

“And so my question to you is…are you an organ donor?”

“I…Yeah I got the little red heart on my license…yeah.” He nodded, unconvinced.

“You know, you have to tell your family, explicitly, in writing.”

“So much tissue goes unused, and I have to tell you, there is never enough.”

“And they can use everything.”

I thought of my license with the little red heart printed next to the picture of me that was taken two weeks after passing my drivers test. The picture was taken in June and my skin was sunburned which hurt like hell and once it stopped it would fade, peel, and burn again.

“Skin?”  He leans forward and gestures to his back. “They take it from the back, in case the family wants an open casket.”

“I bet people really don’t like to talk about this.”

“Well, there is a right time, I like to ask people before, God forbid, anything happens.”

I looked around the plane and felt suddenly claustrophobic.

“Well this isn’t really a good time for me.”

“Maybe not, but people need organs.”

“Yes, they were born with defective heart valves and they needed new ones”

“Well can they use any heart valves?”

“No.” he made an indication with his fingers to show a space about a fourth of an inch wide.

“So what your telling me is another baby has to die in order to give the baby with no heart valve a heart valve. Do I have you right?”

“Well you have to minimize that don’t you? I mean what if that baby died while waiting for some other baby organ it needed? Like a baby liver transplant? It all comes down to whoever moves the stuff around, and that’s the line of work your in. And your “baby heart valve” speech is just bad marketing, because once the shock wears off people start asking questions, and you don’t want people asking those questions because you don’t have answers to those questions. You’re just here, telling the person sitting next to you on a goddamn airplane that babies are dying, and there ain’t a goddam thing they can do about it!”

But the plane had started to de-board, and he wasn’t listening to me anymore.

Outside the airport I struggled to control my hand as it twitched, making it difficult to grip the door handle of the cab. I gave the driver my parent’s address and sat with my forehead pressed against the window and my hand on my stomach. I began to feel like I was going to vomit again. I wondered if it would ever feel anything other than like I was going to vomit. 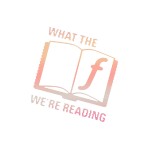 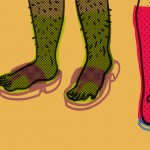