Kevin Veselka shared with us his personal journey as a filmmaker.

We recently sat down with Kevin Veselka, a 2013 BFA graduate whose focus lies on Film and Video. Hesitantly called himself a filmmaker, Kevin spoke to us with great honesty about his ideas and inspirations behind his recent short video pieces Switchblade and Frost Vapor. The artist who works with both digital and 16mm film and tries to “act through other people” also shared with us his personal journey as a filmmaker.
http://kevinveselka.squarespace.com/
kevinveselkafilm@gmail.com 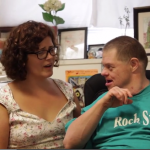 The Arts of Life