A new series on emerging art and artists in El Salvador.

Part one of a three-part series exploring emerging artists, art, and art practices in El Salvador.

All photos courtesy of Danielle Mackey 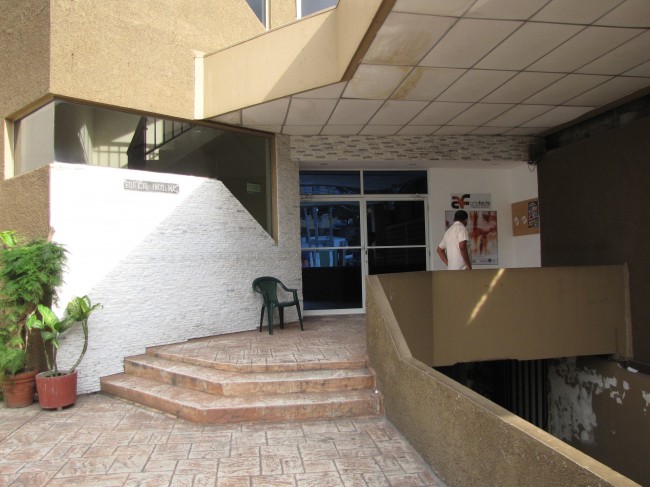 The entrance to Artefacto Espacio Cultural.

“You’re here to see the young man?” The sturdy gentleman in a tan vest with a semi-automatic slung around his shoulder asks as I walk up to the small museum’s front door. “He’ll issue you in; just a second,” he says. The name of the “young man” is Carlos Funes, and he is the owner and principal director of the museum, called Artefacto. The security detail is there because Funes also happens to be the son of the current president of El Salvador.

The guard sweeps open the tinted glass doors and I find myself flanked by another three guards, seated just inside.  The museum is small — shot-gun shaped, perhaps about five meters wide and three times as long — and the main offices are in the back. It’s dimly lit in an attractive way, and a projector throws onto the back white wall a video of an acoustic performance by the popular Mexican band, Zoé. Funes exits the office in his green-brown suit and tie. I feel a bit under-dressed in my jeans and Converse, but Funes has an ear piercing.

Beginning to speak almost before sitting down, he explains that the music video is modeling an idea they have for an upcoming exhibit: to film minimalistic, 2-camera acoustic performances of Salvadoran bands with a small audience enjoying the performance. Then, he points out the walls, hung with paintings and drawings. His initial comments explain why Funes does not refer to “Artefacto” — which means “artifact” when translated literally — as a museum.  The full name of the building is the Artefacto Espacio Cultural (Artifact Cultural Space). Funes, together with a team of artists, began this space in May of 2010. Their idea is to provide a place for various forms of art, and activities devoted to the promotion of art, as a vital part of Salvadoran culture.

Although it opened just last year, the concept for Artefacto has been germinating for a while. Carlos previously worked with a local troop of videographers and documentarians, called Tripode. What brought him to Tripode was an appreciation for art in his lineage. (Carlos’ mother was a plastic artist.) He loved it, but identified as an artist only behind a video camera. He began to wonder how he could get as close as possible to the other types of art that he loves. “How could I facilitate art without being the artist? I don’t know how to play the guitar, though I love music; I don’t have talent with a paintbrush though I love to paint; and though I like to write I don’t have a disciplined pen.” Carlos ruminated on the desire for a while. “One of my most impacting moments in art was when I did a documentary about blind painters with Tripode,” he explains. “I thought, ‘If these blind people have the courage to paint and the heightened sensitivity to produce such beautiful art, I can make my contribution too.’”

Gallery space inside Artefacto, with Mexican band "Zoé" playing on the projector screen.

Funes’ contribution manifests itself in this cultural space, which fills a void that currently exists in the Salvadoran art world. “My idea with Artefacto is — just like the word ‘artifact’ would suggest — to give artists the tools necessary to do their work.” For Carlos, this especially applies to emerging artists. “There is a stigma here that the old guard — those who sell paintings for upwards of $5,000 or 10,000 — are the only ones worthy of sponsorship. But we want to break that stereotype. We have to change our way of viewing these things in this country. All of the Salvadoran masters that we’re still privileged enough to have around were once emerging artists too.” Funes insists that focusing on emerging artists acquaints him with impressive talent. “I see lots of emerging artists that have their own voice, their own style. We have to bet on these young folks.”

Artefacto’s current exhibit proves Funes’ point. It spotlights a series of intricate, vibrant drawings and paintings made by economically disadvantaged youth in a school known as the Experimental School for Plastic Arts and Photography. “You should have seen the kids’ faces when they entered the gallery and saw their own work up on the walls, with placards with their names and spotlights for each piece,” he tells me. “They were ecstatic.”

Though Funes values inexperienced artists, he is not shy about explaining what he sees as the necessity of art as a commercial activity. In fact, Artefacto’s other raison d’etre beyond celebrating art, is selling art. “Some people are too romantic about art: you know, ‘art for art’s sake,’ art as pure passion, etc. In the end, art is a commercial product. It’s a piece that you can sell. There’s a necessity to sell, and artists have to have the vision to be able to do so.” 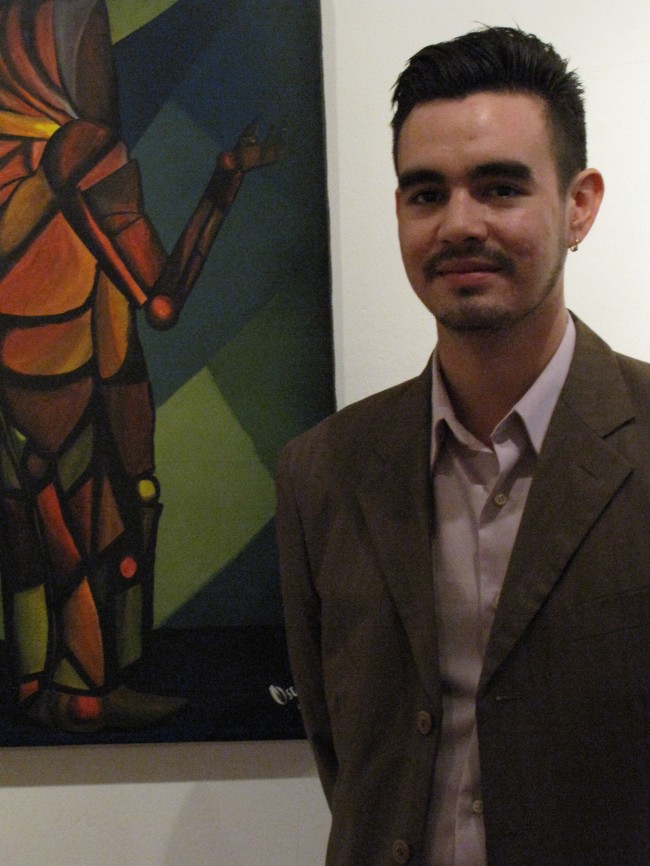 Funes standing next to artwork in the space.

He emphasizes that his work at Artefacto is an attempt at innovation in Salvador’s small and entrenched art world. There are workshops on Mayan art, a trip to Peru for an exchange between two Salvadoran artists and a museum in Lima, a dance presentation done by a team of two dancers on a floor sprinkled in sand.  In May of this year, an exhibit called “Collage” invited both artists and interested lay people in to write on and paint up the walls of the cultural space in homage to Roque Dalton. May is the month that Roque Dalton — perhaps the most famous Salvadoran poet — was murdered in 1975 during the 12 year civil war that ravaged this tiny country, leaving nearly 80,000 dead.

Funes identifies himself as part of a new movement led by emerging artists. This movement extends beyond Artefacto, and includes using digital platforms for art, creating advertising for products that feature emerging artists’ work, and parties in public spaces that involve a night of multiple simultaneous exhibits of photography and visual art, concerts, and beer on tap. And this is only the beginning.

There is surely much to come from Artefacto and the rest of the Salvadoran emerging art movement. Stay tuned for part two of “Emerging Art in El Salvador,” where Danielle will talk with three young independent Salvadoran artists about their motivations, struggles, and opinions of their field. 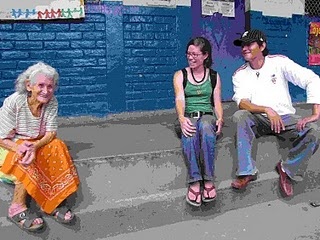 Danielle (center) with friends at a Salvadoran woman's shelter.

Danielle Mackey is a journalist, translator and teacher based in San Salvador, El Salvador. She holds a BA in Political Science and International Studies  from St. Louis University. She is especially interested in the social movement and its organization against marginalization, corruption and violence in El Salvador. She blogs about her time here (www.danielleinelsalvador.blogspot.com.) 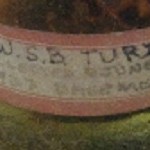 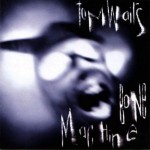