“Winnebago Man,” is director Ben Steinbauer’s documentary on Jack Rebney. Who is Jack Rebney, you asked? He’s an RV salesman—but he’s better known to the world as “angriest man in the world” from YouTube. 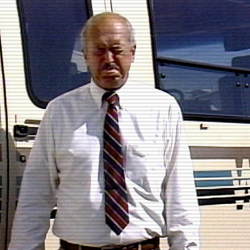 Who is Jack Rebney, you asked? He’s an RV salesman—but he’s better known to the world as “angriest man in the world” from YouTube. Rebney’s now legendary stream of expletives were an edited stream of footage culled from between takes for a Winnebago promotional video in 1988. In 2005 the footage resurfaced on YouTube and became viral, inspiring countless parodies and remixed versions with alternate soundtracks. Fascinated by the video and by the phenomenon of YouTube stardom, Steinbauer was compelled to track down and find out what had happened to Rebney, the man behind the frustration that had erupted into a massive Internet fanbase.

The film wavers between explaining Steinbauer’s and Rebney’s motives for participating in this weak premise of a film based on viral video of a videotape. Steinbauer appears fanatical about connecting Rebney to a public he is largely oblivious to (he claims to have been unaware of his Internet fame), while Rebney, now almost 80 years old, shifts from kindly old man in initial interviews to belligerent curmudgeon. By the end of the film he is redeemed as something akin to a grumpy family member along for the ride.

Steinbauer’s role as filmmaker is problematic throughout, and is expressed most clearly in moments where we see him driving up to meet Rebney at his cottage in a remote location in the mountains of Northern California. Access to Rebney’s property is mediated through a long steel gate with several heavy-duty locks that Steinbauer takes particular care in filming. We see the process of him opening and closing the gate several times, pulling on the padlocks ensuring that Rebney is safely contained. It is a disconcerting image, and succeeds in defining Steinbauer as Rebney’s biggest fan while also inferring that the filmmaker is the internet star’s one human connection to the outside world. This fact was made more prominent during the Q&A portion of the screening, where Steinbauer called Rebney at home and relayed questions from the audience through his speakerphone.

I found myself constantly questioning Steinbauer’s intentions throughout the film. There were numerable scenes where I felt Rebney was objectified—put on display to amuse as only a feisty old codger dropping f-bombs can. The filmmaker’s attempt to show the man behind the vulgarities was mostly limited to sentimental footage of Rebney caring for his dog and interacting with an old friend. We never learn about Rebney’s life between the initial videotape (it is revealed, not surprisingly, that Rebney was fired because of the tape) and the video of the film. There is a heated exchange between the two when Steinbauer begins to ask Rebney pointed personal questions. This brief moment is an attempt to question our relationship to the real people behind these viral videos, and perhaps one of the more interesting questions of the film.

Winnebago Man is set for national release in the early fall. 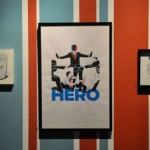 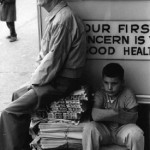