Review of “Gut Shot” at the Stephen Daiter Gallery 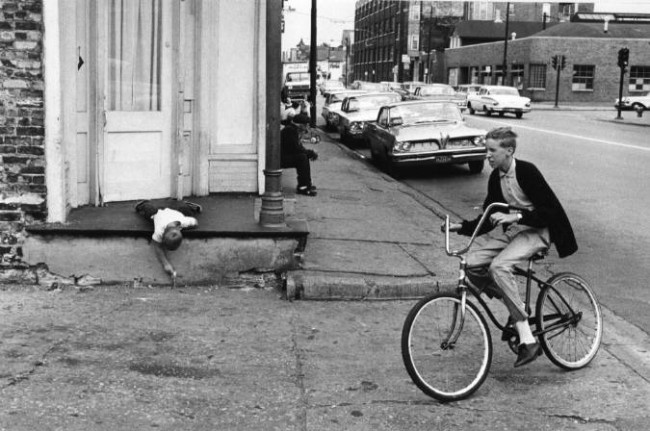 In the late 1950s and early ‘60s, American photographers reinvented the documentary tradition. The banal and commonplace were elevated above traditional notions of inherent beauty and formal composition. “Gut Shot,” a review of photographic works on view at Stephen Daiter gallery through July 31, presents this expanded vision of photography through the work of photographers Lee Balterman and Jay King.

Lifelong photographers of Chicago, Balterman and King capture the human actions of a city in motion. The unassuming images reveal the evocative—and often overlooked—interaction of the built environment and the social landscape. Although both artists were commercial and editorial photographers, the gathering of more than 50 vintage gelatin-silver prints privileges their aesthetic sense. Covering a 60-year period, the work creates a loving portrait of a bygone Chicago.

These urban interactions are snapped in a casual manner, but demonstrate a keen eye for moments of tenderness, loneliness, contemplation, enjoyment, and physicality. The nobility of Balterman and King’s images rests in the artists’ joy in monumentalizing the everyday human experiences they observed in their surroundings. However, the photographers truly excel at distancing the photograph from the specific moment, thus providing the viewer with the scent of a story beyond the frame. 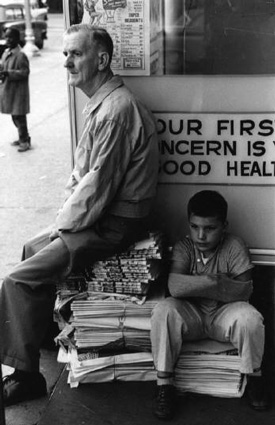 King’s photographs from the Riverview Amusement Park and Chicago’s lakefront recall the characters of Lisette Model’s Coney Island photographs. However, King’s images are more generous in their representation of leisure and recreation. This is not a photojournalistic investigation; the photographs dispel analysis in favor of a shared enjoyment of instances of play. The portraits capture the ebullient identity of the subject, while reminding the viewer of her own simple indulgences. In “Chicago and State” (1967) and “El Stop at Chicago Downtown” (1964), there is noticeable pride in the women captured in transit. From navigating the snow-covered city, to late summer afternoons in the lapping waters, King’s depictions of mid-century Chicago exude vivacity and dignity.

Balterman’s series of six photographs, “Untitled” (1950s-60s), depict women’s faces close-up from varying angles. The women swell outward to extend beyond the frame; one makes eye contact in surprise, another stares off in meditation, and a third is indulging in street food. Highlighting the human components of the city is Balterman’s craft. Yet, Balterman is also concerned with documenting the events that define one’s existence within society. For instance, with an almost supine viewpoint of a common event—reading the newspaper—“Untitled (Brazil’s President Dead)” (1954) forces the viewer to rationalize the disorienting perspective, and, in turn, the disorienting report.

The urban cityscape is a backdrop for the social exchanges that ultimately define its inhabitants. Revealing realms of common experience, King and Balterman enthrall the viewer with their tender documentation. 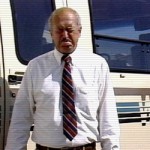 The Menagerie by "Death by Design, Co."