“The most radical thing you can do is literal: modeling, creating, showing. It’s not just a representation; it’s a literal example, the real thing. The most metaphoric comes from being the most literal.”

Putting the “Green” in “The Greenhouse Chicago” 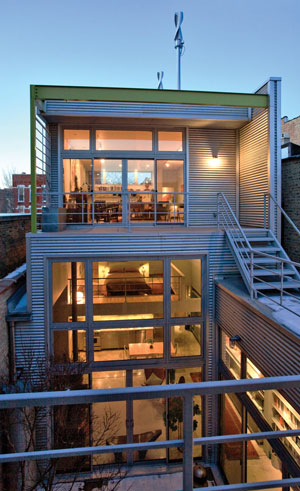 Green is more than just a color. Aside from its relationship to grass and envy, it is also the new behavior, material and political mindset of choice for many Americans. Frances Whitehead and her husband Jim Elniski have applied, challenged and redefined the standards of meaningful “green living” by reconstituting their personal space into one of Chicago’s examples of sustainability.

Professors at SAIC, Whitehead (Sculpture) and Elniski (Art Education) didn’t realize their home would become a visual pun until they started designing it with James & Kutyla Architecture. Whitehead discussed ways in which green living could be applied to her home in an interview with F Newsmagazine: on-site energy generation, a green house solarium on the roof, as well as a green-colored roof and green-colored bricks at the home’s entrance.

Although Whitehead admits that the green bricks weren’t consciously installed as a pun, it’s no accident that everything from the bricks to the elm flooring and Galvalume façade found its way into their home because of their limited carbon footprint. Essentially, all of the additions to Whitehead and Elniski’s home —which used to be a brick warehouse before it was readapted—were sourced from the United States and, whenever possible, from Chicago and its surrounding areas.

After finding the green bricks from a nearby brick manufacturer, Whitehead and Elniski chose them so as to remain unified with the streetscape.“We were tuned in to localization, but also factoring in additional cultural considerations at the same time,” said Whitehead. “My husband likes to refer to it as
a Rubik’s cube. It was like a puzzle: how can it be local and affordable?” Whitehead and Elniski continued to find materials made locally. The couple’s knowledge of small mills and lumber companies throughout the Midwest led them to a local company called Urban Forest Products. “We ended up with these great wooden floors that are Chicago recycled street trees,” said Whitehead, who appreciates the American literary significance of the elm tree. 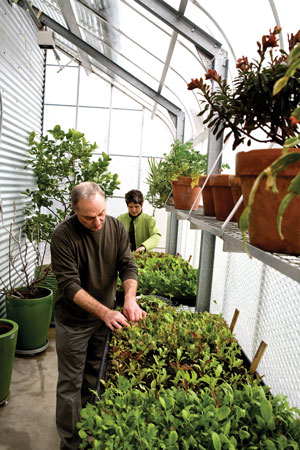 The artists in their rooftop garden

“It absolutely became a big sculpture that needed to be made,” Whitehead remarked, the materials of which were restricted with regard to their source.

“In that way, it follows a classic sculpturalist idea entitled ‘truth to materials,’ where things look like what they are. We have a raw cement floor that looks like cement. Everything pretty much looks like what it is.” The concept of truth to materials is largely a metaphor for the entire building itself, and one that Whitehead sees as a fundamental entryway into living sustainably.

“At this point in history there is nothing more metaphoric than to do what we should all be doing,” explained Whitehead. “So the most radical thing you can do is literal: modeling, creating, showing. It’s not just a representation. It’s a literal example, the real thing. The most metaphoric comes from being the most literal.” Whitehead and Elniski weren’t concerned about whether or not their solar panels, wind turbines, rainwater cisterns and green roofs would pay off financially. “The whole question of payback is a really bogus question because it doesn’t account for many assumptions regarding modern life,” said Whitehead. “Many people would think, ‘I can’t afford that,’ but they don’t say that about their car. You might say the architect would ask questions about the investment or whether or not we would get the performance out of these devices, but for us they had another job to do.”

This project dealt with one of Whitehead’s primary objectives as an artist—making the invisible visible. “We kept hearing everyone talking about all these alternative energies and all this stuff you could do, but who was doing it? No one is doing it, right?” Whitehead said, explaining why she and Elniski decided that readapting an unused brick building was worth doing in order to set an example for the future.

For not having started as an art project, Whitehead and Elniski’s home, which they have aptly titled, “The Greenhouse Chicago,” quickly became a functional and habitable embodiment of Whitehead and Elniski’s art practice. “After thirty years of being an artist, you turn everything into an art project. It’s really hard to keep separate,” said Whitehead about creating meaning through architecture, space, material and, of course, sustainability. 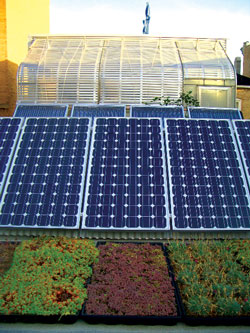 Solar panels on the top of the house

While planning to install two solar arrays for hot water, Whitehead and Elniski stumbled upon the idea of incorporating a complete set of sustainable additions to their home. “A lot of artists play around with the idea of the collection, the ‘wonder cabinet,’ and having one of each thing — the ‘encyclopedic.’ And so we went ‘Oh, it could be the encyclopedic greenhouse.’ So I went looking on the Internet… and we found all these additional things we could do. I’d say that’s the moment we started driving the architect crazy,” said Whitehead, who insisted that the project was no more and no less an obsession than everything else she and her husband do.

The resulting living space, which also contains Whitehead and Elniski’s artist studios, has been visited by at least 50 tour groups, including the American Institute of Architects, as well as classes from SAIC, DePaul University and Kent School of Law, and individuals who simply want to experience Whitehead and Elniski’s most sustainable sculpture yet—a kind of contemporary Winchester Mystery House of Sustainability, an ADA wheelchair accessible example of living “green” in Chicago.

Whitehead acknowledges that the project, which began in 2003, might lose its meaning within a number of years, when she hopes that sustainable energy will become commonplace. Regardless, the Greenhouse Chicago serves as a landmark. It also led Whitehead to teach the Knowledge Lab, a sculptural course at SAIC that explores the role of artists in creating a better future.

Currently, Whitehead works with the City of Chicago Innovation Program, proposing a city of the future in which “alternative” energy becomes mainstream, and green is more than just a trend.