We read these books so you didn’t have to. 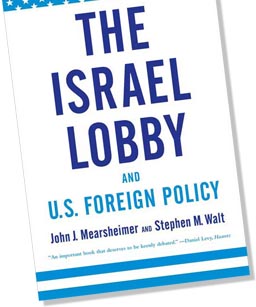 Lately, you can’t swing a dead cat without hitting a book written by some sort of social scientist from University of Chicago.

This book began as a 2006 article in the London Review of Books, in which the authors investigated pro-Israel influence in America and abroad. Readers who manage to trudge through the 496 pages of this book may be inspired to pay closer attention to what our presidential candidates are saying: is anyone willing to question US spending practices? Readers might wonder why policy makers aren’t saying, “Hey, maybe taxpayers would like to spend that $134,791,507,200 on domestic issues instead of on Israel.” Readers may also be prompted to question what kind of effect that amount of money has on the stability of the Middle East, but the sheer size of this book is as intimidating as the conglomerate of pro-Israel influences discussed between its covers. If you want the information in this book without actually reading it, I suggest bypassing the insane amount of words. Download Stephen Walt’s 2008 American University in Cairo lecture available through iTunes. – Natalie Edwards

God is not Great by Christopher Hitchens

Christpher Hitchens has earned a reputation for being annoying and unspiritual with good reason. As a former half-assed Christian and temporary Jew-convert, he has had several opportunities to take a personal and critical approach to various religions, choosing, eventually, to shun them all in favor of research and atheism. Seemingly antithetically, this book may inspir the reader to do some soul-searching of their own. It certainly increased my appreciation, as a lapsed Catholic and resentful Presbyterian, of my own experiences within the confines of religions tradition–a weird spirituality all its own. Beyond that, however, there are historical and cultural tidbits you can use to annoy your friends when conversations lag at the bar. Plus, the superior feeling you get by seeing what you believe written down in a book is the Christian equivalent of the annotated New Internation Version of the Bible. Increase your feelings of superiority by skipping over chapters mumbling “yeah, I get it already,” for the full effect. – Natalie Edwards

The Enchantress of Florence by Salman Rushdie

Salman Rushdie’s fondness for epic fairy tales strikes again in his latest literary effort, The Enchantress of Florence. The result is absolutely delightful and eminently readable, but also rather like a puff pastry. In fact, while the plot has some lofty aspirations to being a defense of human imagination, Rushdie has concocted the languid sort of romance that finds itself most at home ensconced in a beach chair. The story weaves together many threads: superficially, it tells the tale of a Yellow-Haired Stranger who finds his way from renaissance Florence all the way to the Mughal empire’s capital of Sikri to disclose an amazing secret. His secret has to do with the travels of a beautiful Mughal princess and a mysterious Italian mercenary, and also giants, whores and a host of historical characters and improbable circumstances. The prose bolsters this confection by plying the reader with beautiful images that make the 349 pages extraordinarily painless and satisfying. This might not exactly be Tolstoy but it was a fantastic way to waste a few summer afternoons. – Aurelie Beatley

For example, as Galazia closes her essay on stripping, Staged, she points out, “With few notable exceptions, people do not get into the sex industry for reasons that have anything to do with desire for sex, any more than a person enters janitorial work out of a love for cleaning…By keeping the debate about sex work focused on sex, and not work, the true nature of the issue is obscured…In this framework women are sluts instead of workers, or victims instead of cognizant participants in an economy. The real question here is, why are our options so lame?” It’s a compelling read packed with more “real questions” to keep you thinking over your summer vacation. – Rachel Sima Harris

When You Are Engulfed in Flames by David Sedaris

Apparently, this is the summer where I only read books by middle-aged gay men who describe their asses as flat, because I just finished David Sedaris’ new book When You Are Engulfed In Flames, right on the heels of reading two books by Augusten Burroughs. I hate to say it, but David Sedaris has become boring. My favorite parts of this book are where he talks about his sister, Amy Sedaris, the funniest woman ever to exist. I kept flipping pages looking for mentions of her when I tired of reading about how hard it is to be rich.

You know how the Silver Jews stopped being awesome as soon as David Berman stopped doing drugs and drinking and found religion? Well, I think we’ve got the same problem here with David Sedaris. He cleaned up his act, and in doing so, produced an unmemorable book about his loft in Paris, spiders in his home in Normandy, buying art, love, devotion, and how much his partner has changed his life. All good things when discussed in moderation, but indulgence like this can turn even the mushiest person cynical.

To say that When You are Engulfed in Flames is entirely snooze-enducing would not be fair. Some of the humor is worthy of acknowledgement, not laughs though. One of the funniest stories in the bunch, The Understudy, is about an abusive nanny that takes care of David and his siblings for a week while his parents go to Europe. Sedaris handles the white-trashiness of the nanny with grace and humor, without diminishing her trashiness, difficult to accomplish without coming off as a jerk. He’s clearly talented, but this book lacks the funny details of earlier books. Overall, a bland read.

One Response to Summer Reading