Campus security recently issued a statement banning smokers from the sidewalk outside the Sharp Building on Michigan Avenue. Many students have few thoughts to offer about the ban.

Campus security recently issued a statement banning smokers from the sidewalk outside the Sharp Building on Michigan Avenue. Ashtrays have been removed from the area to discourage smoking, and students, faculty, and staff have been advised that security will be enforcing the new rule. Reasons cited include concerns about access to the entry of the building, given the placement of construction barricades and fencing, which limit sidewalk space.

Some dispute the idea that there is even a problem which needs to be addressed. Says Brittany Stewart, a first year student, “There’s never that many people out there anyway, so it’s like, what’s the problem?” Her idea for a simpler solution? “I think they should just ask people to stand to the side and stay out of people’s way if there’s a problem. It’s pretty inconvenient because on breaks you can’t go down there and smoke, so you just don’t get to.”

Outside the Columbus Drive building, graduate student Kevin Daly remarks, “If they did it over here, I think people would go crazy. Obviously people who do smoke are going to have to move away from school. Safety issues may even come up. Sometimes bums come up here and start bothering everybody for a cigarette, and obviously it would be more so up [at the Sharp Building]. And if everybody’s just tossing their cigarettes down, it’s going to be a pain to pick that stuff up. Our neighbors may not like us very much if there’s going to be tons of cigarette butts all over.”

He proposes that security instead create a designated area for smokers, but adds, “I don’t think it’ll happen.”

Many students, however, have few thoughts to offer about the ban. One offers, with a resigned shrug, “I don’t really have an opinion on it. It sucks, but not being able to smoke in bars sucks, too.”

Where will students in the Sharp building go to smoke during their break now? Reports Stewart, “Across the street in front of someone else’s building.” 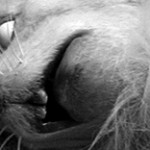