An Ephemeral Night of Perfumance

Modern Dance Club puts on a scented performance between performer, follower and observer

The Modern Dance Club presented a night of “perfumance” (performance with perfume) and improvisational movement on Dec. 9, 2022. In collaboration with the ATS Olfactory Art class, the Modern Dance Club distributed an information booklet sprayed with hand-made perfume. Emma Garthwaite, a co-leader of the Modern Dance Club, collaged images and poems related with various scents to create an information booklet and printed them in different colors. Members of the club then sprayed each booklet with different scents and distributed them to the audience prior to the performance. Students, faculty, and outside guests filled in the audience seats during the night. The event provided drinks and snacks and lasted from 7:30 pm to 9:00 pm. 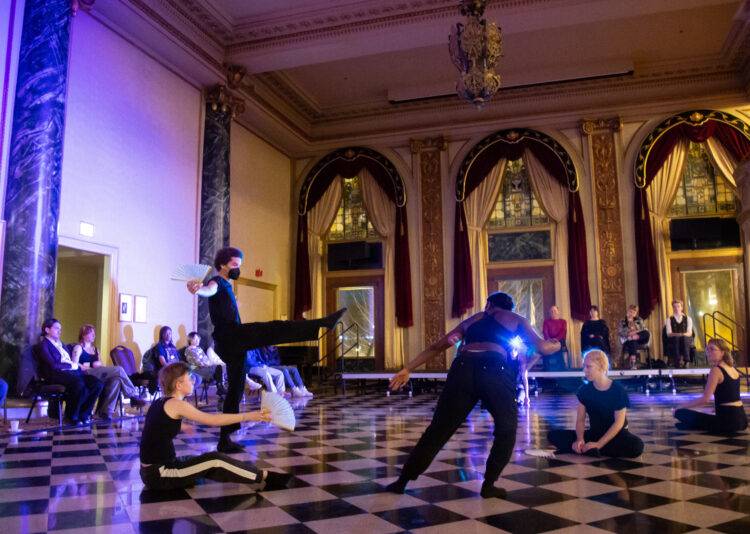 The Modern Dance group as a leader, the audience as an observer, and the photographer as a follower of the movement.

The idea behind it was to create “an immersive experience, activating the senses and exploring the relationship between bodies, space, smells, and dance,” said Emma Garthwaite, the Modern Dance Club leader. 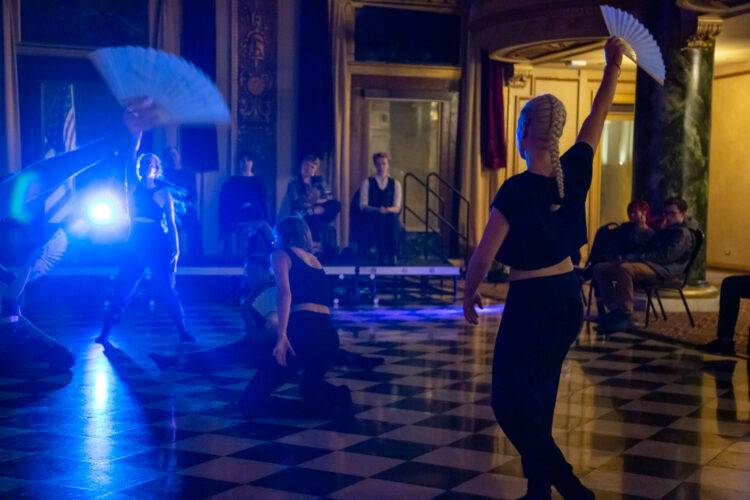 Two dancers in conversation of creating and following, while the rest observes.

During the Covid lockdown, they “missed being able to move and have the dance space,” said Andy Giovale, the co-leader of Modern Dance Club. Through the experience they wanted to “stay present in the moment through the ephemeral sense of olfactory,” said Mason Brown, a sophomore and member of the club. 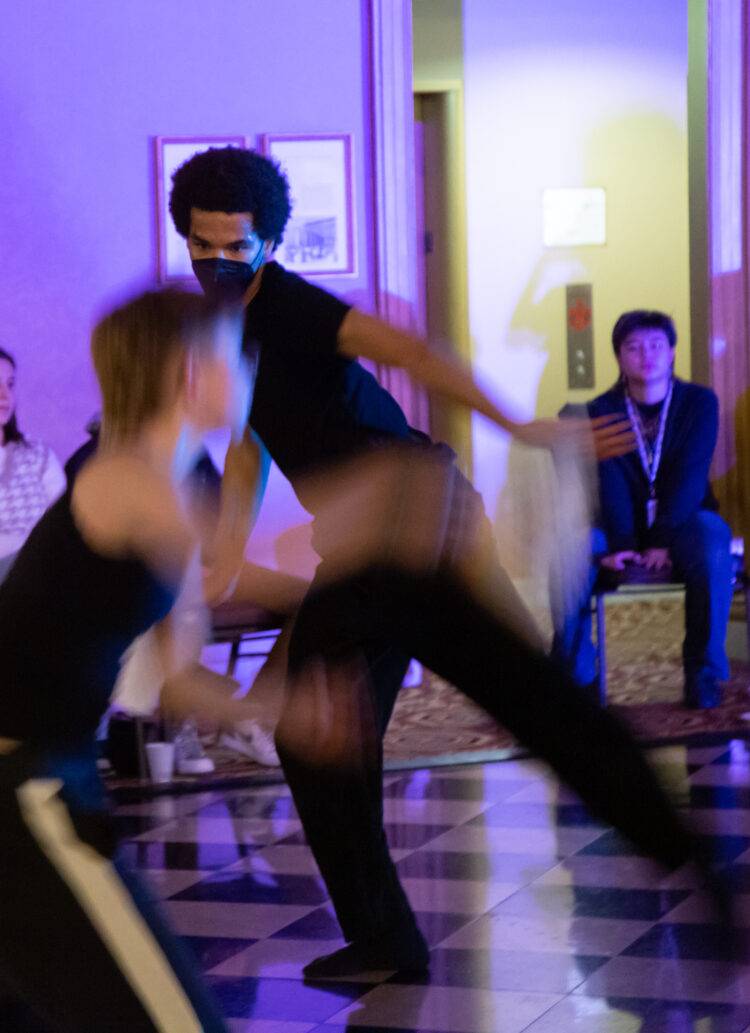 Two dancers in conversation of creating and following, while the rest observes.

The group spent 4 to 5 weeks in preparation for the performance, hoping  to achieve “a group of dancers’ consistent shape, emotion, level, speed, and following through extractions and contractions,” said Andy Giovale. 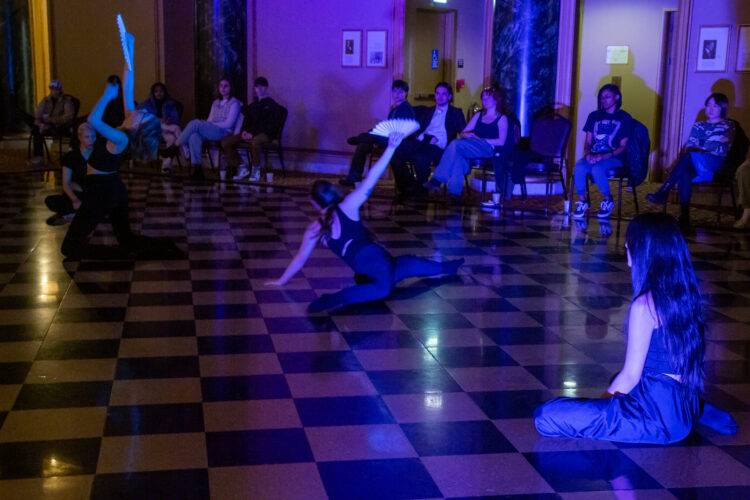 A trio in the moment of the three-structure performance.

The performance came from an idea by Tedd Neenan, the instructor from the Olfactory Art course. He used to be a modern dancer in the 70s and 80s and shared the improvisation idea he has been working with for 15 years. 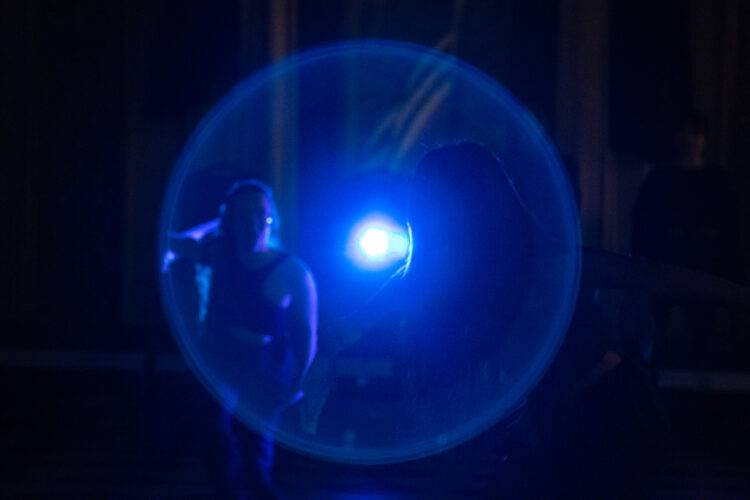 The prompt is as follows: Three performers form an organic movement, each taking on the role of a leader, follower, or observer. First, a leader initiates an improvised movement, then a follower creates their movement inspired by the motif gesture, while an observer studies their movements until they become another follower, dancing with the observed gestures. During this sequence, the trio can be in sync or break away from the motif gesture. As dancers follow along this sequence, their roles organically evolve into all parts of the performance.

Andy Giovale curated the soundtrack for the performance based on the act of breathing, dedicating each song to a strict position in the sequence to tell a story. The soundtrack initiated and ended with a sound of breathing, while songs with various rhythms and tunes filled in between. 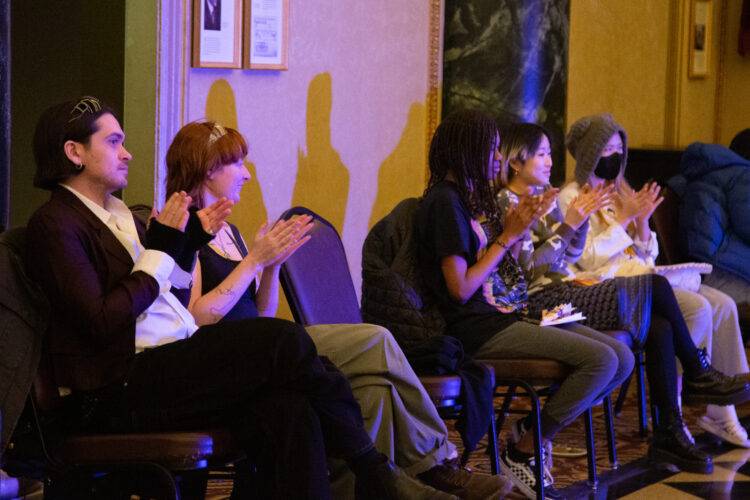 The performance ended with an atmospheric sound of breathing.

While Emma Garthwaite graduates in Spring  and Andy Giovale graduates in the Fall, they hope the club can continue on performing.

They practice every Monday from 5pm to 6pm in the 13th floor movement room at Maclean. For more inquiries, contact @saic_modern_dance_club on Instagram.