TikTok, the Cult of Virality 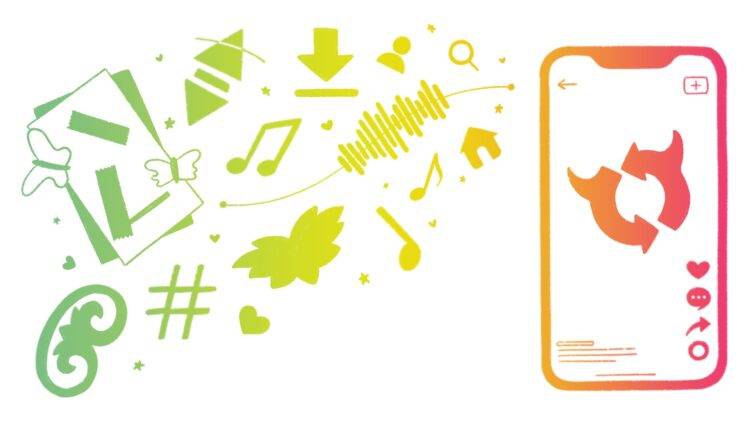 For better or for worse, it cannot be overstated that TikTok has reshaped the music industry. It’s no coincidence that many of today’s top charting artists either have an account, have had a song of theirs soundtrack a thread of trends, or amassed uncountable crowds of fans overnight from a viral song.

In video essays and comments under these posts, critics of the app make themselves heard. Whatever your opinion may be, it’s clear this app is changing the way we consume music.

I want to make it very clear I am not trying to perpetuate a “phone and music industry bad” objective. Many artists from either end of the creative pendulum are tasked with publicizing themselves to a degree, and TikTok has helped many musicians gain an income and reach an audience. These critiques of mine are threaded into an already unraveling paradigm of record label mismanagement.

This time, it’s Steve Lacy who received the backhand of viral success at a few recent shows of his “Give You the World” tour. Fans throwing cameras at him on stage, interrupting his set to get his attention (“Can you say ‘hi’ to my mom?”), and an audience forgetting the lyrics of his most popular song and TikTok hit, “Bad Habit,” after the viral hook. “I don’t know… Sorry,” one of the girls by the barricade apologized in a video.

Melting artists down into quick-cut, bite-sized snippets of their music seems to be what has kept the app afloat for a few years now, despite how unfair it is to the musicians like Lacy, who have put years into their careers. A few flimsy seconds of a viral video has become a rite of passage for the new algorithm.

In the same vein as the early MTV days, many musicians wrote off the TikTok format as a cheap and artificial way to maintain and expand their demographic. For new artists, especially those with no connections or foot-in-the-door contracts, TikTok became an attractive alternative to becoming mainstream. With this new ability to market and promote one’s own work, new artists can grow their own fanbases independently. When these songs go viral, it’s only a matter of time before labels begin to take notice.

Virality can turn musicians into one-hit wonders if they aren’t consistent. This is a dormant burden that record labels fear will happen. While the platform has aided the rise of newer artists, it’s also become the fine print of marketing strategies for musicians with long-standing discographies and a cultivated following.

In May, a popular tweet showed screenshots of musicians FKA Twigs, Halsey, and Florence Welch syncing up the similar allegation that their record labels were forcing them to make TikToks.

“it’s true all record labels ask for are tiktoks and i got told off today for not making enough effort” FKA Twigs wrote in a now-deleted TikTok, a meta-rebellion that echoed Florence Welch’s exhausted, arcane comeback against her label begging for “lo fi tik toks.” On her end, Welch posted a video of her singing through a quivering voice, one-dimensionally moving and looking at the camera. It’s worth noting that both musicians, though vastly different in style, share a likeness in their ultra-divine feminine, musically bewitching auras they’ve made themselves known for. So when Twigs went from occasionally posting a pole dancing routine to pseudo-relatable digs at her dating history, and Welch’s feed went from music video excerpts to excessive, filter-embedded clips, people noticed the obvious and jarring turn in their online presence.

Many people believe the way these labels mandate their artists to market themselves on the platform is beneath these musicians, and in turn devalues the artists’ work. Forcing artists to play the part of a more approachable, accessible character in order to attract new listeners outside of their existing realm of fans has become the bread and butter of this new marketing tactic. The goal is to lean on parasocial authenticity in order to gain more virality. But what happens to the artists’ creativity when they have to restrict themselves to appeal to the broadest audience?

“Right now the reality is that social media is a competition. You either have the following and the unique touch or you don’t,” influencer strategist Alejandra Marroquin tells me. “Most companies decided on popularity and how well of an audience reaction you have.”

What is almost left out of the equation of the social media based music industry is that it is exactly that: an industry. There are contracts, sanctions, and agreements for everyone involved from the artists producing their own work, down to the associates that bag the vinyl pressings. Attention spans are historically short, and marketers have been shouldered with the task to make a profit in this ever-shortening climate. Marroquin summed it up best: “We are in a different era of popularity right now and money is the main idea. But that doesn’t mean you can’t attract your own audience. It’s just businesses that are looking for an endless line of money to come in.”

Moving Pictures: The Uneasy Quiet of “The Banshees of...