Moving Pictures: The Uneasy Quiet of “The Banshees of Inisherin”

A movie in which Martin McDonagh explore noise, mortality, and everyday horror. 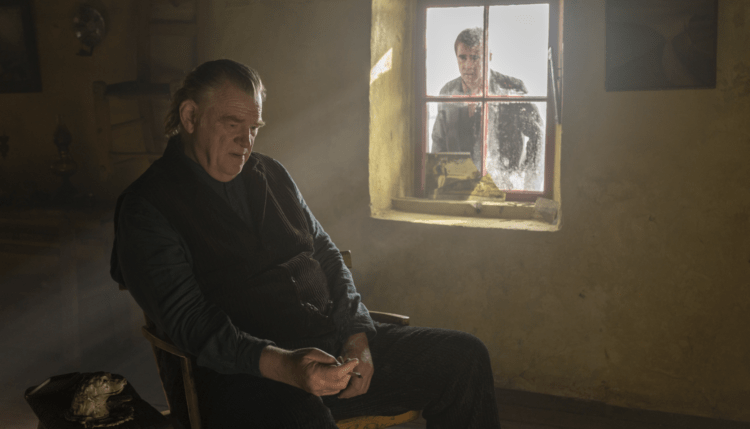 Martin McDonagh has never been afraid of a little violence. Many of his plays are known for their graphic onstage violence, paired with gallows humor and political tumult. In these works, the deaths keep coming long after the laughing has stopped. The bleakness of existence always overrides the nihilism of his comedy.

He brought that same sensibility to his first two feature films, “In Bruges” and “Seven Psychopaths,” both movies in which Colin Farrell plays a down-on-his-luck man, navigating criminal underbellies, while death follows close behind. Or rather, that death was in front of him in the form of a serial killer, a hitman, or some sort of fellow with a gun.

In 2017, McDonagh veered away from his usual content and geography, taking a hard dive into the American Midwest with “Three Billboards Outside Ebbing, Missouri.” The film landed him Oscar nominations for Best Screenplay and Best Picture. But despite the accolades, I consider the movie to be a misstep for McDonagh. It felt like a capital T Topical Film, and very unlike his usual oeuvre, typically driven by historical specificity. He still had his signature unlikable, dimwitted characters, but one of them being a white cop who had tortured an innocent black man made the jokes feel tone-deaf rather than well-earned laughter in the face of the void.

Now, McDonagh is back to his roots with “The Banshees of Inisherin,” back to Ireland, back with the chameleon-like Colin Farrell. And thankfully, back to history; McDonagh has veered away from the traumas of today and instead digs into the loneliness and existentialism that haunts the Irish folk of Inisherin in 1923.

In “The Banshees of Inisherin,” Colin Farrell plays Pádraic, a slightly dim but good-natured fellow, who is unceremoniously dumped by his best friend, Colm, played by Brendan Gleeson. Where in the past, McDonagh has gone for events that rock a community, that shake the foundations, here he goes small, almost microscopic. Though Inisherin is tiny, this movie isn’t about how their fractured friendship tears apart the town. Instead, McDonagh stays close on what this friendship and living a good life means to these two men.

For Pádraic, that’s being nice. Being even-spirited, not thinking too much, while war is waged just across the coast. For Colm, it’s about being remembered. Having something that outlasts you and your kin. It’s not about living so much as it is about what you leave behind when you die.

McDonagh’s exploration of mortality is starkly different in “The Banshees of Inisherin” than in his usual work. In his other works, death comes because of the callousness or vindictiveness of others. His characters are killers, accidentally or otherwise. But in Inisherin, there are no killers. There is a policeman who even the affable Pádraic cannot stand. But he is not a killer. There are no pistols, rifles, or shotguns on Inisherin. There is cannon fire and the sound of muskets across the coast. But that is not in Inisherin. In Inisherin, death comes naturally. It floats in the blue sky, across the green fields, in the cracks of the stone walls. It settles on its characters, surrounding them, making them aware that they either die on the island because they have never left, or they prematurely bring their own lives to an end, unable to stand another day of emptiness. Suicide is a frequent theme of McDonagh’s work but it’s usually triggered by specific events, like a terminal illness or a fatal mistake. In “The Banshees of Inisherin,” death is driven by the cumulative hollowness of everyday life. It’s something that haunts the characters who have the space to think, the ones who don’t fill their heads or mouths with constant noise to drown out the silence of the isle.

The dichotomy of noise is captured by Colin Farrell and Brendan Gleeson’s incredible performances as Pádraic and Colm. Farrell has been one of my favorite onscreen performers for many years, because no matter the role, he looks as if he’s lived it for years. And here, he adapts to the sound and setting of Inisherin like a fish to water. Pádraic is hilarious because of his inability to stay quiet. And he’s equal parts heartbreaking when we see him realize the effect that has on the people around him. Pádraic is almost like a puppy, wide-eyed and eager to please in the only ways he knows how. Colm, on the other hand, is an old dog, creaky, surly, and only wants to be left alone. But for all his grumpiness, Gleeson makes Colm an endearing character in his own right, in a very different way than we connect to Pádraic. We understand Colm’s cynicism, his nihilism, his existential depression. We may not understand why that drives him to his actions, but we see why he clings to music like it is the lifeboat that will carry his spirit from this island.

Siobhan, Pádraic’s sister played by Kerry Condon, is a wonderful foil to the binary existences of the two men. Condon is as clever as Colm but as kind as Pádraic. But if anything, this  makes her life more difficult because she can see her listless future but cannot act on it. On the other end of that spectrum is Dominic, the police officer’s son played by Barry Keoghan. Keoghan is masterful in this role as the village idiot, the boy nobody likes or respects. He is not particularly kind, and he’s certainly not clever. But Keoghan infuses a boyish charm, caked over Dominic’s tortured interior. Because despite his external idiocy, Dominic may be better aware than anyone of the life that awaits him. It’s a standout performance from Keoghan who is a few films away from being Colin Farrell’s successor, as an actor who infuses pathos into the funnyman.

“The Banshees of Inisherin” is a McDonagh story, so it still has its moments of violence. But those moments are very unlike what we have come to expect from the writer-director. The physical violence is kept offscreen, with us only seeing its ramifications. What is laid bare is the self-inflicted emotional violence these characters wreak upon themselves. There is nothing physically dangerous about Inisherin. But knowing you’re stuck there, being aware of its bleakness and its predictability will drain the life out of you. It’s why for Pádraic, ignorance is bliss. But for everyone else, that emptiness is filled with the banshees’ silence. Like Colm says, the banshees are not screeching anymore. They do not portend disaster. Instead, they are quietly watching, knowing that the repetition of every day is horror in itself. It is a death by a thousand cuts. But only if you stay quiet and listen.

TikTok, the Cult of Virality