When action only speaks louder than the words. 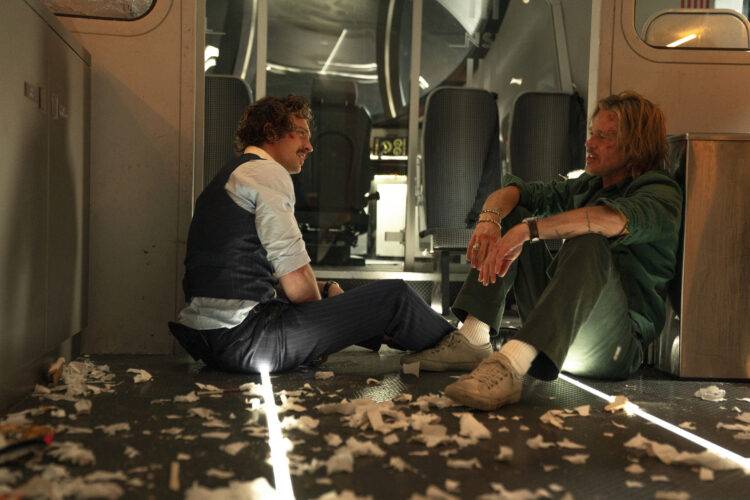 There’s one bit in “Deadpool 2” where Deadpool recruits The Vanisher, a person the audience, nor any other characters can see. It’s a funny bit that culminates in its punchline: when Deadpool and his team jump out of a plane, they narrowly avoid an electrical wire. Except for the Vanisher, who turns out, has been real all along, gets electrocuted, and in his dying moments, finally becomes visible. That’s not the end of the joke. Because when we see him, we realize the Vanisher is being played by none other than Hollywood megastar Brad Pitt, making a grand appearance for less than one second.

In “Deadpool 2,” director Doug Leitch and Brad Pitt’s last collaboration, you miss the joke because you blinked. Similarly, in “Bullet Train,” if you squint and strain, you can make out the joke. Except for this time, you’re doing it because you’re trying to imagine a better joke, hidden under the clunky writing. Was that actually a joke, or did someone say “sex stuff?” Does it count as a recurring gag, if one character constantly brings up Thomas the Tank Engine? Is it funny if a character is dressed by the film a certain way, and everyone else makes fun of their outfit? Am I meant to laugh if an assassin punctuates every one of their lines by shouting “bitch?”

If you squint, concentrate very hard, and imagine yourself to be someone extremely easily amused, maybe you can conceive of these as jokes. But you still won’t laugh.

Because despite desperately wanting to be funny, “Bullet Train” is rarely actually funny. It has its moments, like the bickering assassin pair of Lemon and Tangerine, played by Brian Tyree Henry and Aaron Taylor Johnson, or the series of escalating zany coincidences resulting from Brad Pitt’s supposed bad luck.

But for the rest of the time, there’s more gesturing to a joke than actual jokes. The film’s biggest laughs in my cinema were all in response to stunt casting. The joke, if you can call it that, is asking, “How did that A-list celebrity show up for that?” more than any actual set-up within the confines of the movie. It’s the Brad Pitt reveal of “Deadpool 2” without any of the actual legwork behind it.

The good news is that between the action and the comedy in this action comedy, its action possesses more flair. It’s the rare modern action movie where fights are used to tell us more about the characters. The characters’ personalities radiate through the choreography — Ladybug, Brad Pitt’s character, is an aspiring pacifist, which makes all punches, stabs, or kicks reluctant, while he tries to talk his way out of violence. It’s a neat visual gimmick embedded into each fight, and is far more enjoyable as a concept in action, than it is to actually hear Ladybug verbalize his pacifism.

That’s because the fights are unique, backed by strong choreography, and clear cinematography, while most of the dialogue comes from cut-scenes from “Deadpool 2.” Leitch’s experience as a stuntman shines through in a genre becoming increasingly muddled by motion-blur, over-edited cuts, or overbearing greenscreen.

That sense of ingenuity comes through in his other directorial choices, some faring better than others. There is a heavy reliance on flashbacks in the film, many of them stylistically rendered, like Lemon and Tangerine counting their kills for the audience, or the slow-motion massacre of a Yakuza gang. Some of these inject much needed life into the sluggish plot, while others weigh it down. In particular, the montage near the film’s end is far too clunky and convoluted in trying to make all the flashbacks cohere together.

These montages have the same function as the multiple characters. Because, if you squint, “Bullet Train” can maybe qualify as an ensemble film. The arrival or reveal of each assassin, like the montages, sometimes helps restore some of the momentum. But other times, like with Zazie Beetz’ bitch-centric vocabulary, the film feels swollen, packed with bits that aren’t quite as entertaining as the film’s creators envisioned.

The film, to its credit, also tries to give each character some sense of an arc. These subplots range from mildly endearing to tedious. The young female assassin, played by Joey King, has an excruciatingly boring plotline — Every scene that depicted her machinations had me mentally checking my bladder to decide if I might as well go to the bathroom. Though the train is empty, this film’s plot is bloated, stuffed, overcrowded with eclectic montages, supposedly wacky characters, and non-joke jokes.

When each character first appears, their code name flashes in bright neon, in both English and Japanese, humming beside their face. It’s a fun bit, declarative, in your face, and precisely what “Bullet Train” is about. It’s not particularly subtle, nor is it very clever. It’s an occasionally shiny distraction that even if it may not make you laugh, will at least give you something to look at. But like the film’s many poor British accents, it’s a film better seen than heard.

The Sky Talks: Back to the Future in Virgo...