Following the war in Ukraine from Chicago. 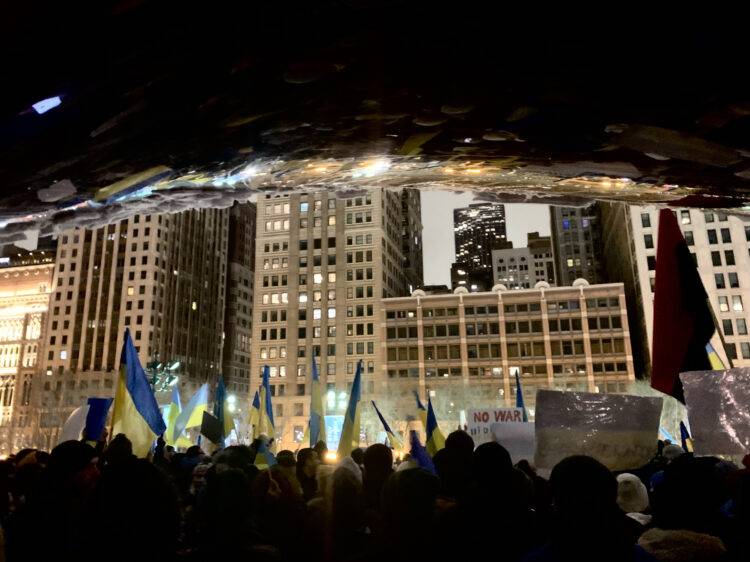 A crowd gathers at “Cloudgate” in support of Ukraine. Photo by Parker Yamasaki.

“Putin is bombing my country right now. My family, my people,” a woman told me at a Feb. 25 rally to support Ukraine. She held a white foam board sign with a picture of Vladimir Putin taped to it. In red, blue, and yellow she has scrawled: “Putin = War Criminal; Help Ukraine.”

It’s tempting to talk about the geopolitics that enabled Putin’s invasion of Ukraine; of the hypocritical imperialism of the U.S. and Western Europe; of the warning signs. All of that is important for understanding what’s happening, but it skirts the urgency of the moment. So for right now, it’s better for us to take a cue from the woman at the protest and think about that one man.

Right now 44 million citizens in Ukraine are fighting, fleeing, and seeking shelter because of one man’s arrogance. Many more, around the world, live in constant anxiety about what is happening to their families, their friends, their hometowns. In short, they are all going through hell.

Because of one man. This man, who has held a grudge for three decades; who in 2005 declared the breakup of the Soviet Union as the greatest geopolitical catastrophe of the 20th century. The twentieth century. I hate to do this, but I can’t get Kanye’s line out of my head: No one man should have all that power. This is far from explanatory journalism, this is simply rage.

Diving into a situation this dire can be daunting, so here are some resources for information and action. There are many incredible journalists who have a much deeper understanding than I do about the context, and I encourage you to seek them out. 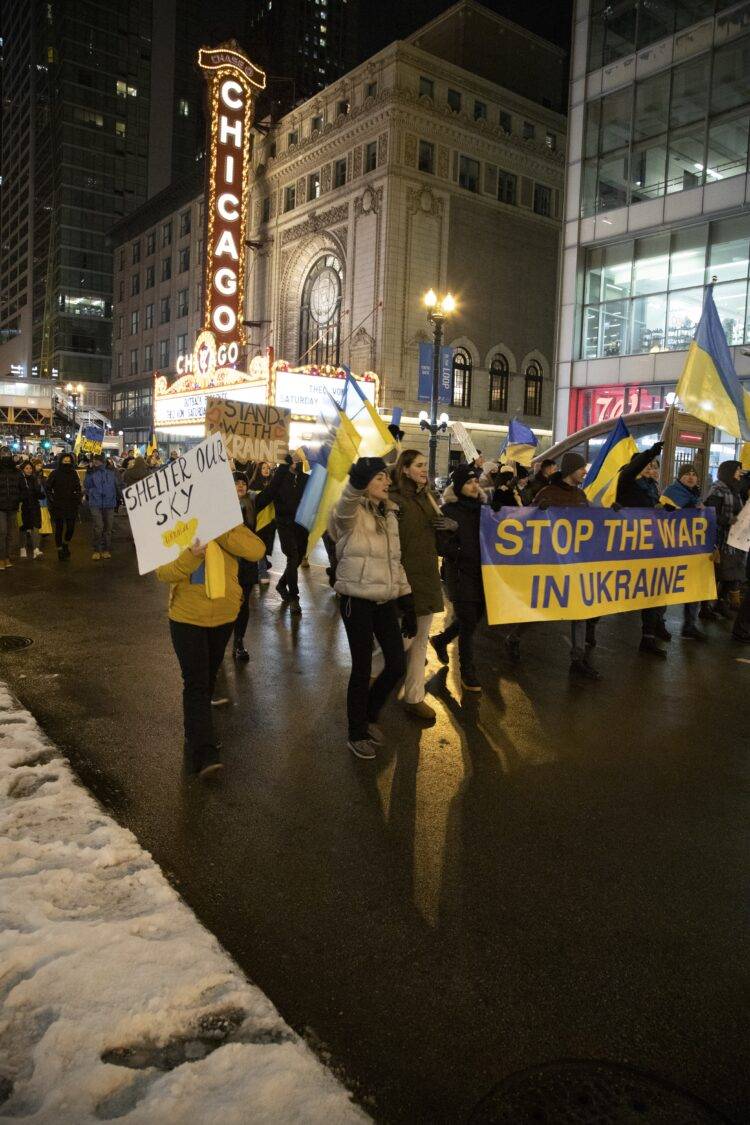 February 25 rally against the war in Ukraine. Photo by Nadgee Rivera.

Reuters Institute has a Twitter thread of various resources for journalists covering the war.

On-the-ground reporting in English is being done by this list of journalists (compiled by CNN reporter Daniel Dale), Tanya Kozyreva, and The Kyiv Independent.

International investigative journalists at Bellingcat are fact-checking the dramatic claims of Russian and Russia-backed media and keeping a running spreadsheet of debunked claims.

Freelance reporter Jane Lytvynenko is keeping a running Doc of social media accounts that are spreading disinformation. If something sounds dubious, you can cross-reference the account with this sheet.

Chicago has one of the highest populations of Ukrainians in the U.S. according to Block Club Chicago and NPR — with nearly 10,000 residents in Ukrainian Village, and more than 100,000 in the greater Chicago suburbs. Read local coverage of rallies, most post information about the next gathering at the bottom of the article.

Keep an eye on the Facebook pages of the Ukrainian Congress Committee of America, Illinois for upcoming demonstrations, and Ukrainian Consulate Drobot Yevgeniy for ways to help.

Special thanks to Lisa Korneichuk for help compiling resources.

Parker Yamasaki (MANAJ 2023) is the managing editor at F Newsmagazine. Reach out to her at pyamas@saic.edu.

A Letter From Ukraine