Loving The Monster: The Commitment Issues of “Venom: Let There Be Carnage”

The monsters that work — and the ones that don’t — in Sony Pictures’ newest alien antihero outing. 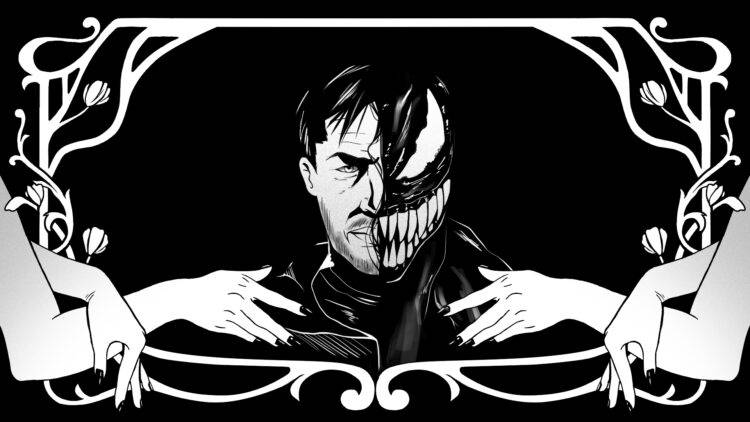 In “Loving the Monster,” Sidne K. Gard (BFAW 2025) explores the definitions, creation, and fascination with monsters in pop culture.

A pile of alien goo sharing an apartment and a body with a sweaty, motorcycle-riding reporter, a psycho murderess with a superpowered-sonic-shriek locked in a secret government prison, and a cannibalistic serial killer who teams up with a different pile of alien goo. Out of these options, who would you decide the monster is? “Venom: Let There Be Carnage” can’t commit to one answer.

Stuck somewhere between the second half of a romantic-comedy and a standard action-packed superhero movie, the “Venom” sequel was met with mixed reviews from critics. In order to enjoy this movie, the viewer must either be invested in Eddie Brock (played by Tom Hardy), or be able to turn their brain off and enjoy a CGI-based action movie. If you’re looking for anything intellectually deep or stimulating, this is not the movie for you — but we already knew that, right? However, it is a movie about loving the monster.

The first “Venom” movie was released in 2018. It functioned as an origin story for reporter Eddie Brock, and human-eating alien Venom. Venom is a symbiote, an alien who needs a host to survive. In the first movie, Venom gives up on his species’ desire for taking over the Earth because Eddie makes him see humanity as worthwhile. They come to an understanding with each other, because they are both “losers” who are ultimately better as a duo. After many explosions, CGI fights, and a strange homoerotic (but technically still straight) make-out scene, Eddie and Venom choose to continue their symbiotic relationship by the end of the first movie. “Let There Be Carnage” picks up a little while later, expanding on their struggles sharing a body and a life. After a bad fight with each other, they basically break up, and Eddie’s friends have to get them back together to face off against the villains and save the day.

Initially, Venom was a comic book character made as an antagonist to Peter Parker’s Spider-Man. Over time, he evolved into an anti-hero, a common transformation for popular comic book villains who fans get attached to  — see also: Harley Quinn and Red Hood. His relationship to his human host, Eddie Brock, became a regular focus for the comics, and the release of Sony’s first “Venom” movie drew even more attention to them. Once I watched “Venom,” I had to go read the comics to experience more of Eddie and Venom’s dynamic, and once I consumed the comics, I turned to fanfiction. Their relationship, and especially Venom’s experience as an alien trying to fit into the human world, is compelling — especially so for younger, queer fans who don’t often get anything close to a canon queer relationship in big blockbuster superhero movies.

But is Venom a queer character? This is the biggest question I had going into “Let There Be Carnage,” as it had been left ambiguous in the first film. In the comics, the answer is yes. Eddie Brock and the symbiote flirt with each other, compare their symbiotic relationship to marriage, and even have a child together named Sleeper. The movies are a separate issue. Surely, Sony wouldn’t want to make a superhero franchise about an explicitly queer couple. But director Andy Serkis refers to “Let There Be Carnage” as Venom’s “coming out,” and there is a way to read the character arc Venom goes through as a metaphor for queerness. Venom wants to be out and proud about who he is: an alien anti-hero who eats bad guys. But Eddie does not want anyone knowing about Venom. This is what leads to their “breakup” and how Venom ends up alone at an LGBT rave and giving a speech about how he’s happier being out of the “Eddie closet.”

Venom is a giant goo-alien who feeds on human brains, but a loveable one. He cracks jokes while catching and eating criminals, he decides he cannot eat two chickens because they are “friends,” and he protects the local convenience store owner. The final shot of “Venom: Let There Be Carnage” is Eddie and Venom sitting together on a tropical beach. It is at this moment that Venom admits that he loves Eddie. This is our first option for the monster of the narrative — Venom and his symbiotic (and queer-coded) relationship with Eddie. Venom is not human, and needs to engage in his monstrous tendencies, like eating human brains, to survive. And yet, he is trying to fit into human norms for the sake of his human counterpart.

But “Let There Be Carnage” struggles with an identity crisis. It wants to tell Eddie and Venom’s story through hinging much of the narrative’s humor on their queer-coded dynamic, but it also wants enough plausible deniability to avoid Disney and mainstream audiences being upset about the tentacle goo monster being gay. Is Venom the monster? Is Venom queer?  Is being queer monstrous? “Let There Be Carnage” doesn’t really know how to answer these questions. In fact, it seems to avoid them altogether. Even Venom telling Eddie he loves him is left vague enough that the audience can decide for themself if this was a romantic confession or not.  So let’s look at the other “monsters” in the story — our three antagonists.

Yes, that’s right. This 90-minute film attempts to juggle three supervillains at once… and doesn’t quite get there. None of the other “monsters” are fleshed out as much as Venom is. They are more akin to plot devices for Eddie and Venom to fight, than full characters on their own. The first is Frances Barron (Naomie Harris), a black woman with a supersonic scream who has been locked up by the government since she was a child. As a young girl she fell in love with Cletus Kasady (Woody Harrelson), the biggest of the villains in this movie. He’s a serial killer, a cannibal with an obsession with Eddie Brock, and the host for the Carnage symbiote, the third villain in the movie. With Carnage’s help, Cletus escapes from prison, breaks Frances out of her government facility, and proceeds to throw a haphazard wedding leading to the final battle.

It is in this battle between the three villains and Venom and Eddie that some very interesting things happen. Cletus gives a long speech as he beats the shit out of Eddie, ranting about how people think he’s a monster for killing his whole family despite not knowing his reasons why. He goes on to rant about the abuse he endured from his family, and that he became a monster because they were monsters.

This sets up a strange expectation. Cletus is undoubtedly the villain. In this universe, he is called a monster. But he is also Eddie’s foil. Cletus continued the cycle of violence from his family, and now is trying to find happiness in a romantic relationship with another “monster,” Frances. In some ways, isn’t Eddie doing a similar thing with Venom?

The movie moves on quickly from this. There’s more fighting to be done, and fires to be stoked. As the battle continues, Eddie and Venom are losing. Carnage is too powerful. In the face of defeat, Venom is on the verge of giving up. But then one of Eddie’s human friends tells Venom and Eddie that they are more powerful because their relationship is truly symbiotic. Venom and Eddie know how to work in harmony, and thus they are stronger than Cletus and Carnage, who are only symbiotic for the sake of violence.

The monsters in this movie aren’t the aliens or the serial killers. The monsters are these characters, who have been cast out and ostracised, trying to form relationships. Both “Venom” movies have always thrived on Eddie and Venom’s relationship. Cletus and Frances are also a relationship of monsters. They would be happy to watch the world burn around them, so long as they can be married. This isn’t very different from Venom’s reckless attitude — when he and Eddie are together they can do anything they want, including biting off people’s heads.

Entertainment Loving The Monster: The Commitment Issues of “Venom: Let There Be Carnage”
« Previous Story

The Rise, Fall, and Almost-Resurrection of “Animal Crossing: New...