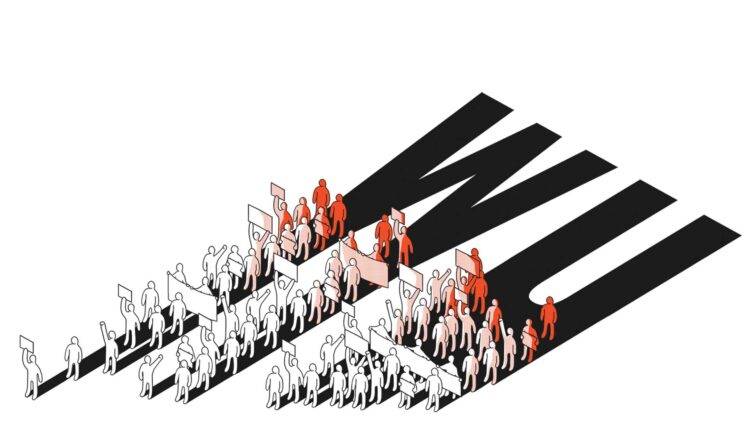 Abman is the Associate Director of the American Federation of State, County, and Municipal Employees (AFSCME) Council 31, the Illinois chapter of one of the nation’s largest unions. In early 2020, Art Institute workers reached out to AFSCME with plans to form a union.

On Aug. 3, 2021, the Instagram account @aic_wu posted a five-slide announcement that began: “Today we announce the formation of the Art Institute of Chicago Workers United.” Sixty AIC staff members signed a public letter and posted it to the The Art Institute of Chicago Workers United (AICWU) website. SAIC administration swiftly responded with an email firmly positioning themselves against union form- ation at the school.

On Aug. 10, another public letter appeared on the AICWU website. SAIC staff had officially joined the effort.

The Art Institute of Chicago Workers United, or AICWU (pronounced: A-I-C-Wu), is the banner under which two bargaining units are attempting to form.

In total, the AICWU would represent roughly 600 staff members: 300 from the AIC and 300 from SAIC. Members hold non-supervisory roles: academic advisers, administrative assistants, technicians, librarians, custodians, mailroom workers, etc. Specific definitions around who the union represents — questions like, what exactly is a supervisory role? — are determined by the National Labor Relations Board.

What can WU do for you?

SAIC’s public letter calls for administration to address a lack of transparency around layoffs, compensation, and advancement. It also demands safe working conditions, equity in pay and benefits, and advancements on the anti-racism measures that the Anti-Racism Committee (ARC) recommended last year.

An Aug. 18 email from the administration listed specific initiatives that SAIC has taken in response to worker complaints, emphasizing a willingness to collaborate with staff on issues. Among the improvements: increased hourly rates, tuition remission, retroactive pay adjustments in response to a pay equity study, and ongoing reviews of job descriptions.

When Berger says that he has yet to hear specific demands from the organizers, he isn’t lying. He probably hasn’t, but isn’t that exactly the point?

“For the provost to say he is unaware of worker discontent with low pay, benefits, overwork and inequitable treatment is an admission that senior leadership is out of touch with the struggles we face,” a representative from the AICWU told F.

At the Sept. 9 rally, Robyn Besana, a disability specialist at SAIC and a member of the ARC, recounted her experience sending anti-racist recommendations to the administration only to have them diluted and stripped of their rhetorical power before being shared school-wide.

“Isn’t it strange,” Besana recalled one of her co-workers pointing out, “that as an anti-racism committee, ‘anti-racism’ — the word — only appeared a couple of times in the recommendation. The word ‘diversity’ showed up a lot more often.” Besana continued, “Diversity, while still important, is nowhere near the same as dismantling the systematic causes that uphold racism. Diversity looks like hiring workers of color; anti-racism looks like identifying why retention of these workers at our school is so low.”

For many people, the pandemic year catalyzed growing discomfort. “The layoffs … opened up a lot of wounds,” Myia Brown, assistant director of CAPX tells F, “but also brought to our attention how much power we don’t have in our own employment circumstances.”

Union contracts can offer protection against firing without “just cause,” as New Yorker employees demanded and won in June 2021. Contracts can also offer protection during layoffs such as severance pay, advance notice, the right to be recalled, and continued health insurance. Of course, none of this is guaranteed with a union, but it is guaranteed to not happen without one.

Administration agrees that they were forced to make many quick and consequential decisions during the pandemic. “I want to be clear about the financial impact the pandemic has had on SAIC,” President Elissa Tenny told F. “Since closing our campus in March 2020, we’ve faced significant financial challenges — at one point, SAIC had a shortfall of around $20 million, a massive sum for a nonprofit institution.”

Tenny emphasized that unlike other institutions of higher education, SAIC fought to keep their staff and student workers employed through the end of the semester when the pandemic hit: “Our financial state

was very uncertain, as was the pandemic itself, but to help protect the vast majority of our staff from additional hardship, we only reduced pay for the highest paid employees.” Tenny continued, “Those employees took
a 10%-15% pay cut that lasted eight months; I took a 20% pay reduction that lasted 10 months. This year, I’ve prioritized pay increases for all staff.”

There is a vast difference between President Tenny’s temporary paycut and getting laid off; Tenny was still left with an annual salary of roughly half a million dollars. It is worth noting that President Tenny does not determine her own salary, that’s the job of the Board of Trustees. This isn’t a point about managerial salaries as much as it is a rhetorical conundrum.

The trouble with arguing talking points is that no one speaks at the same scale. The administration looks at the overall revenue the institution brings
in. They determine the pay for a “grade” of workers; they speak in the millions. Staff, on the other hand, focus on individual anecdotes of discontent and job insecurity. They speak to whether a mailroom worker will have a job next week; they speak in the ones.

As for the individual, Berger warns that union participation may make it difficult for workers to negotiate with their supervisors. “With a union,
the School would be legally required to exclusively negotiate with the union over [terms and conditions],”

Berger told F. “As you can imagine, the union contract applies to everyone in the bargaining unit. Union agreements don’t make allowances for individuals’ specific preferences.”

“That’s ridiculous,” Abman of Council 31 says. “They are imagining some 1950s union. This contract is imagined and put together by workers at this moment in time.” The union could write flexibility directly into the contract, Abman points out.

Katie Bourgeois, a mailroom worker in the Sharp building, finds the “you give up your voice” message disquieting. “They [management] want you to be able to come to them individually because it’s so much easier to shut down an individual making asks,” Bourgeois says. “It’s significantly more powerful to come together as a group and set strong boundaries for the kind of workplace you want to see.”

“We love this place”

“I came to SAIC as provost 11 years ago,” Tenny says. “What was so inspiring then — and it’s true today — is how deeply our school is woven into the arts and cultural fabric of our city and beyond. Our students, staff, and faculty truly shape the future of art and design, and you can see it in so many ways just walking downtown and around campus. I don’t think that will change, no matter what.”

Bourgeois and Brown both agree that they feel an affinity for their co-workers, but ironically, they developed this affection through organizing the union. “I feel closer to more people in different departments than I have ever in all of my time both working at the school and attending as a student,” says Bourgeois.

Brown echoes the sentiment: “We love this place and that’s why we’re doing this as well,” she says. “It’s not because we want SAIC to not be here … we just want the conditions to be better. If they can’t respect that, then I shouldn’t work here.”