Unicorns Are Real: A Queer, Feminist Bookstore in Rural Mississippi

How Jaime Harker turned an alleyway into a welcoming literary community. 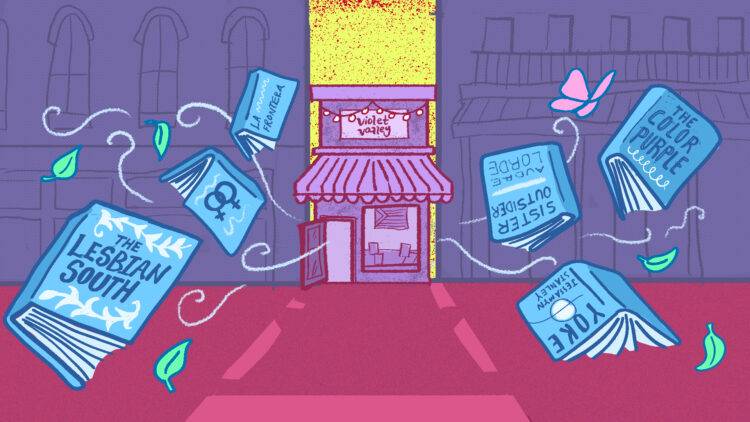 The establishment of a queer, feminist, trans-inclusive bookstore in small-town Mississippi sparks gasps of disbelief, no less than if one claimed to spot a unicorn roaming the forest. But, unlike those elusive mythical creatures, Violet Valley Books is very, very real.

Founded in 2017 by Jaime Harker, professor of English and Director of the Sarah Isom Center for Women and Gender Studies at the University of Mississippi, Violet Valley is a nonprofit bookstore in Water Valley, Mississippi: a town of 4,000 folks that sits just outside of the Mississippi Delta. Although it may seem as miraculous and ephemeral as Brigadoon, appearing only once every 100 years, Harker is emphatic to note that Violet Valley Books is very much NOT a miracle.

It certainly sparks questions, however. How does a queer bookstore come into existence in a red state that is still pockmarked with confederate statues, ongoing voter suppression, and legislative efforts to discriminate against LGBTQ folk?

Harker attributes the inspiration for Violet Valley to the research she did for her book The Lesbian South, which introduced her to a tight-night network of feminist and queer writers in the Women in Print movement who created a network of bookstores and small presses. “I was amazed by this energy and moxy of women who didn’t wait for permission and wrote and printed the books they wanted to read,” says Harker. “It wasn’t easy to do when things were still done by setting type, using typewriters, and even mimeographs. I realized with the advantages I have, I could start something.”

She knew first-hand the value of independent queer bookstores like Giovanni’s Room in Philadelphia, and Charis Books, which she recalls stumbling upon when her family moved to Atlanta in the 1990s. “Those bookstores were a place where I could be, where I could explore. Learning what the Women in Print movement did and the role it played, I thought about how I could build a similar space.”

With the model already established, Harker realized the small town of Water Valley, just a few miles outside of Oxford, Mississippi, was perfect: “Oxford used to be the place where misfits and creatives and outcasts could exist, but those folks got priced out. Even by 2003, Oxford was too expensive. But Water Valley was close and affordable.” In addition, Water Valley had already attracted a number of dynamic entrepreneurial women who weren’t afraid to start new things. With an art gallery, a brewery, and an organic market and grocery store, Water Valley had developed a reputation as a place to try.

So, why not open a queer, feminist, trans-inclusive bookstore?

The perfect storefront opened up: a 10-foot-wide building that had once been an alleyway went on the market. At the same time, the Mississippi House tried to pass legislation that allowed for discrimination against LGBTQ folk based upon religious beliefs. “I realized at that moment, the time was now. What was the worst thing that could happen?” Harker says. Despite a full-time teaching position, a pending book launch, and no previous business experience, Harker leaned into the literary heritage of the Women in Print movement and pushed forward.

Harker emphasizes that she was not alone in this adventure. “People showed up,” she notes. “And this is how queer Mississippi culture works: we very much care for each other. There’s no real division among LGBTQ. There are no separate spaces or bars for each letter. We have to care for each other. It’s not apparent from the outside, but once you tap into it, it’s delightful to find inclusivity in a state that isn’t very tolerant.”

Harker sees Violet Valley as “an on-ramp that allows connecting to this incredibly vibrant network of queer southern folk and our allies.” But, like many modern relationships, it gets complicated and is full of surprises: Harker knows that many of her patrons, allies, and supporters were devout Trump voters. This is difficult to comprehend.

She points to John Howard’s book Men Like That as offering great, important insight: “Most models for queer networks are based upon urban centers, but rural areas never have that critical mass. We need to rethink what a queer network and partnerships look like. Acceptance in many places is based on being ‘known’ in the community.” This, of course, creates complicated allies, but Harker believes this dynamic is important. “We can live in an echo chamber, but then we lose the ability to talk to those around us who think differently.”

How does a queer bookstore like Violet Valley fit within this culture? Harker believes the bookstore creates a space where people can interact, learn about queer life, and find resources. The pure basic fact of visibility is also important. “There is always quiet accomodation in Mississippi, but I want to be open. I get my 10 feet of space on Main Street, and create a space for others to have,” she says.

Violet Valley, in essence, is more than a queer bookstore. Although its wide cross section of books is certainly not incidental, it’s also a space for people, and, ultimately, queer folk. “What matters most to me,” says Harker, “is when someone comes into the store and talks about how much it means to them, that they see literature about them and for them… it gives them a connection. It’s a place where folks who aren’t part of the mainstream can go.”

The good news for Violet Valley is a renewed interest in indie bookstores, which Harker attributes to “buy local” movements steering commerce away from Amazon. In addition, however, Harker sees a growing need for spaces where folks can find their culture. “Books access all sorts of lives and allow us to see our spaces in the world. Just like black history should not be limited to February, queer pride shouldn’t be limited to June. It’s important to have a space where a person can see their whole life represented before them. Limiting sections to certain months (or dropping them altogether) is a lack of commitment. We need consistent investment, particularly now with the current attack on trans kids. This is why Violet Valley is here.”

Harker continues also because of what she sees in Mississippi. “A lot of beautiful art is created here by people fighting back, like Kiese Laymon. This inspires me, and I hope people see that when they visit and realize that they may have their crazy dream, too. If I can do this in a town of 4,000 people in rural Mississippi, anyone can.”

In other words, Violet Valley exists, not because of a magical rift in the universe, but because Harker had a vision and made it happen.

Oh, The Horror!: Terrifyingly Terrible Musicals That Couldn’t (And...