‘The Long Dream’ is a Long Nightmare for the MCA

The museum’s clash with its employees continues, as the artists join the workers. 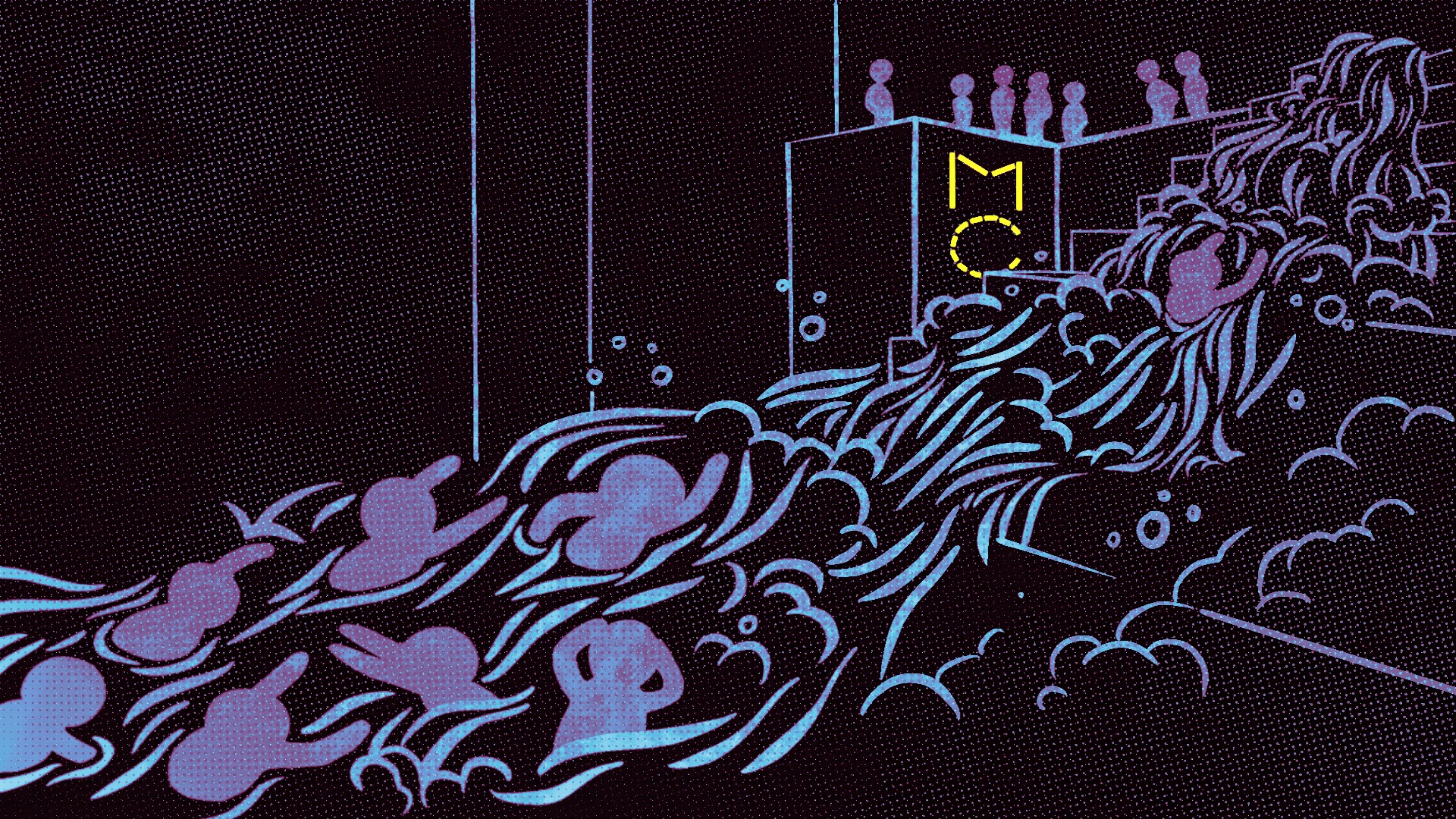 “The Long Dream” opened at the Museum of Contemporary Art Chicago (MCA) on Nov. 7, 2020, as one of its first major shows since the pandemic started. And it’s a stunner, a huge production with over 70 Chicago-based artists at varying stages in their career, from emerging artists, including several recent SAIC graduates, to established heavy-hitters like William Pope.L and Dawoud Bey.

“Artists help us see our world more clearly,” the MCA website reads. “What aspects, which might have gone ignored in the past, can they help us see now?” The show is billed as a way for local artists to “imagine a more equitable and interconnected world […] against the backdrop of a global pandemic and a renewed reckoning over racial justice and inequality.”

At first glance the show seems like a compelling question answered, the MCA giving a platform to a myriad of artists to highlight injustices that hit home for them. A series of five green quilts resembling the American flag hang in one corner of the show. They make up “Tropicalamerican,” a riff on patriotism and the canonizing of Americana by Edra Soto, an artist from Puerto Rico, where American statehood and voters’ rights have been issues since the island was effectively colonized by the United States. Elsewhere in the show, Tony Lewis’s “Plunder” marks the full length of a wall. The Bay State Banner describes the work as “the word ‘plunder’ in giant, curving strokes of Gregg shorthand […] both an abstract image to those who cannot read the stenographic script and also an exact rendering of the word.” Inspired by a Ta-Nehisi Coates quote, “Plunder” considers the American history of anti-Blackness.

Even the labels of the show purport to give voice to those historically unheard by art institutions — namely, young people from nonprofits Marwen and 826CHI and civic workers, with whom the MCA partners for their Label Writing Project to “author artwork labels in the gallery.”

But between all of this, there’s a repetition of a label that feels out of place, reading: “This artwork was removed from the exhibition at the request of the artist.” Now nearing the end of its six-month run, “The Long Dream” has been embroiled in controversy, as many artists have withdrawn from the show.

The issue at hand is the MCA’s ongoing disputes with its workers. Many writers (myself included) have already covered the formation of MCAccountable and worker struggles during the earlier stages of the pandemic. The issues at the beginning were regarding COVID-unsafe work conditions. When MCAccountable formed and posted a list of demands to ensure the safety and fair treatment of its staff members, the museum restructured its front-facing department (Visitor Experience, or VE) with a round of layoffs. VE, a predominantly BIPOC department, lost over two-thirds of its staff, under the guise of the MCA, a multimillion-dollar institution, being hit hard by the pandemic.

When we talked to her last October, Mercel Curioso, an SAIC student and former MCA VE staffer, told us that “the museum said that they [were] doing this in response to MCAccountable’s demands, but cutting 20 people [of a 28-person team] out of a job was not the demands that they were suggesting. They should have warned us before reopening if they were thinking about it, not just as a way of dismantling a unionizing group within the VE department.”

And then on Jan. 21, the MCA laid off another 41 employees after nary a meaningful change or response to MCAccountable’s demands. Hương Ngo and Hồng-Ân Truong, two artists who had appeared in the MCA’s “Alien vs. Citizen” show at the beginning of this controversy, cancelled a January performance in solidarity. Many artists of “The Long Dream” followed with a letter to MCA executives, noting that while “it is an honor to present our work in such a large sweeping group exhibition that navigates the complex implications of the current global pandemic, racial justice uprising, and growing inequality,” the group’s “solidarity will not end with the opening or closing of this show, and we hope you understand the long lasting consequences of the MCA’s refusal to respond to the needs of its workers.”

The following day, museum director Madeleine Grynsztejn appeared in an article for ArtNews entitled “Madeleine Grynsztejn on Creating a Financially Sustainable Museum,” in which she promotes “The Long Dream” and waxes poetic about how the MCA’s “external programming has long been lauded for diversity and inclusion.” She even spins the museum’s response to MCAccountable, saying that they “converted visitor services from part-time to full-time with benefits.” By now, we know that meant cutting 71 percent of the VE department and making the remaining eight members full-time, which also rendered the position untenable for the many students who worked part-time as VE staffers.

On March 12, a day after meeting with Grynsztejn, a group of artists from the show released an open letter stating that 57 artists would be withdrawing their work from “The Long Dream.” Many other artists are also listed in the letter as supporting the artists above, though not withdrawing their own work. The group brings to light some new details, including “the fact that after advocating for themselves, the vast majority of MCAccountable members have been forced out in retribution for their attempts to improve the institution,” and that the most recent round of layoffs occurred “after the receipt of federal PPP funds and [the] Mellon Foundation Art Museum Futures Fund grant to sustain the operations of the museum through a pandemic”.

Aaron Hughes, one of the withdrawing artists, lamented to The Art Newspaper that the circumstances were “really unfortunate because so many of the artists are so honored to be in a show with each other.” Max Guy, another withdrawing artist, says of the show, “My hope is and always was to exhibit my work with a group of respected peers, mentors and formidable artists. I also hoped that someone would write about my art and not about my decision to withdraw it, but the political urgency overshadowed most writing on the art itself. It’s really a shame nobody is writing about how ‘The Long Dream’ is probably the largest survey of contemporary Chicago art in a long time, and instead the museum is being scandalized for its poor employee policies.”

It’s important to note just how many artists in the show, withdrawing or otherwise, are emerging young folks for whom this was undoubtedly a difficult decision when the privilege and impact of withdrawal is more easily navigated by established artists. Exhibiting at the MCA is, after all, a dream for many young artists in Chicago. Guy noted that “the museum plays an important role in bringing global contemporary art to Chicago, and also presenting Chicago contemporary artists to the rest of the world.” The MCA has shrugged off the burden of taking care of their workers such that young artists now have to shoulder the work despite potential costs to their careers.

So when a museum has, frankly, chosen to be a villain, what is the responsibility of the individual artist? Some SAIC students and recent alums respond below:

Brigid O’Neil, BFA 2022: “The MCA labor incident very much reminds me of what SAIC went through last summer. 2020 was a hard year for all for obvious reasons, but it felt weird for institutions like SAIC and the MCA to take actions that were so disconnected from what the communities directly connected to them were asking for. It was so blatantly performative. If I was an artist showing in ‘The Long Dream,’ I think I would also pull my work out of the show. While that’s definitely a cool thing to show your work in the MCA, I believe that showing support for the people who helped the gallery run and then were unfairly laid-off is more important. I don’t want to participate in supporting any organization/institution that doesn’t properly consider its employees, which is a hard statement to make considering I continue to be enrolled at SAIC. But I do feel like such actions for artists are necessary if we believe in active change.”

Peter McDaniel, BFA 2022: “I am aware of the issues at the MCA and also a proud past union member and steward, so labor issues are something near and dear to me personally. MCA and all museums in general are complicated for me. Unfortunately everything on your CV is dependent upon named places. And most of these named places are fraught with issues. We just all have to pick and choose our battles and what side of history we want to stand on.”

Cassidy Early, MFA Painting 2020: “I think the artists pulling work from the show were brave in their action against an institution like the MCA. Like everything, the onus is on the artists in the show with the most power and clout to pull their work in support of the workers. Younger, emerging, or even mature artists who are just getting their first piece in a museum show aren’t in as great of a position to use any leverage at all or, I’m sure at least, don’t feel like they are. I don’t know what I would have done if I were in the show, but I know it’s a lot easier to tell everyone to exit in support of the workers from the outside.

“And in the same breath, if all of the artists that signed the letter of solidarity had pulled their work from the show it would have been a really powerful show of force against the MCA.”

Ingrid Stimmler, BFA 2021: “As an emerging artist, it is a constant disappointment to see up-and-coming maestros who are the front line workers, the people who define what contemporary art is, consistently being let down by prestigious art institutions. Artwork implies humanity, and there can be no true social progression if the voices of the marginalized are silenced and ignored to favor self-serving actions on behalf of the institutions who are supposed to be the leaders in promoting people focused initiatives to better the art world and foster a community with integrity.

“Why invite BIPOC artists to share their experiences and livelihoods if it’s only to maintain the facade of inclusivity? No slickly worded email that reads like an anti-racist declaration can truly be anti-racist if those who are in positions of leadership do not actively partake in anti-racist initiatives. It is an egregious response to the current COVID-19 global pandemic, the rights of the now essential workers, the ongoing fight for civil rights in America, and prolongs the privatization and commodification of young artists who are seeking platforms. For far too long have art institutions in America released blanket statements about solidarity, safety, and accountability as their local communities suffer around them. When will the constant regurgitated public relations end?”

Despite everything it may be wrong about, the MCA is correct in that artists can help us see our world more clearly. As for museums? “I think the best a museum can do at the moment is continue to do its work, make its employees and visitors feel valued and respected,” Guy says, “and not brag about how well they’re doing on a global platform, during the largest ongoing health crisis in the world.”