Considering the “Alien vs. Citizen” show in light of the MCA’s recent labor disputes. 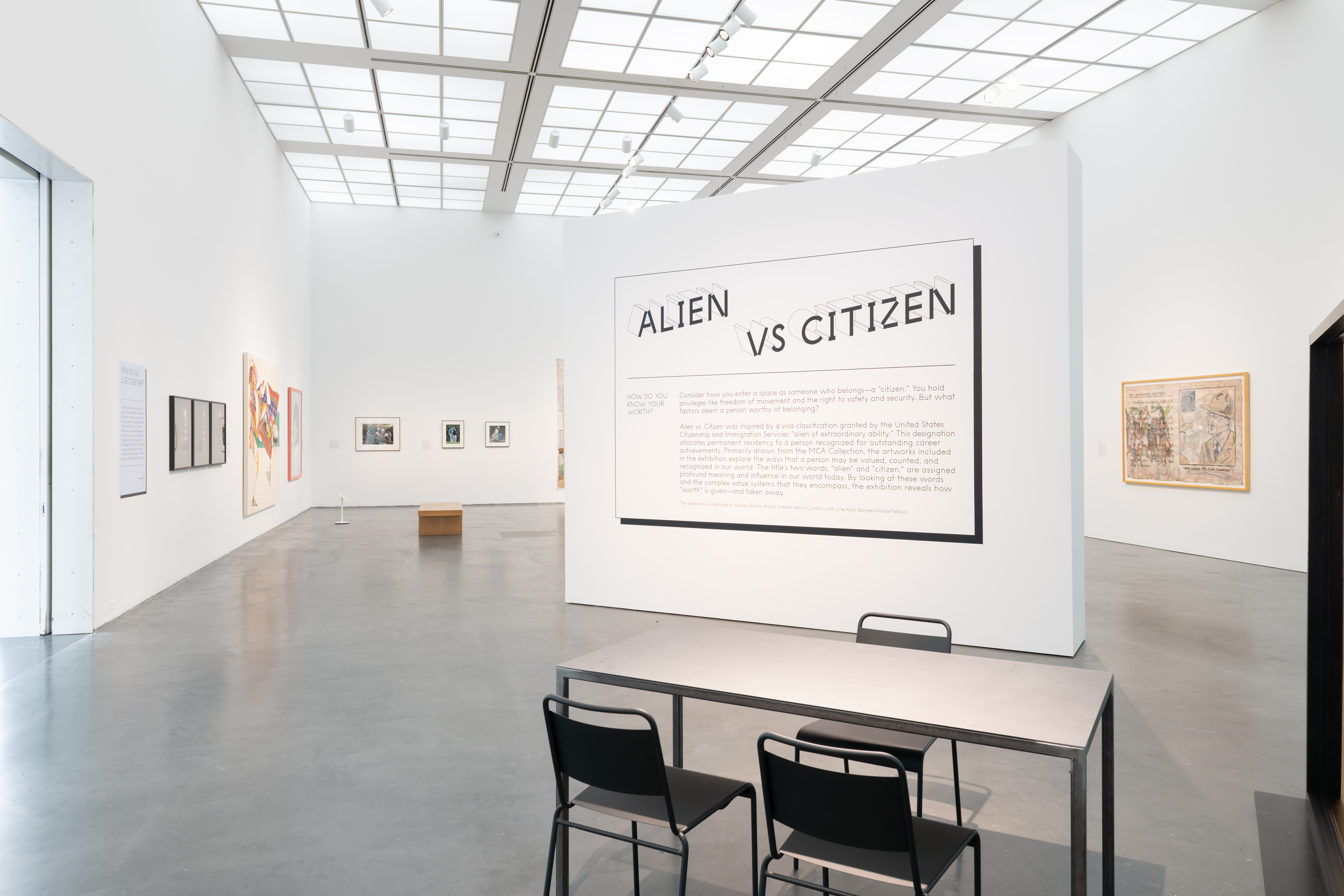 Installation view of “Alien vs. Citizen.” Photo courtesy of the MCA.

Nestled between the traffic of Michigan Avenue and a block away from the lakefront, the Museum of Contemporary Art Chicago (MCA) is nondescript. From most angles, its aluminum-and-limestone shell is vaguely reminiscent of any concrete brutalist building. But from the west, the museum unfolds to the public. A massive set of stairs, speckled with lounging tourists and art students, leads visitors up through a neat duo of revolving glass doors and into the museum. That’s what it’s like most summers but 2020 has brought about a much quieter museum that is sparse in both visitors and employees. The MCA’s COVID-19 guidelines include limited occupancy and a one-way path for visitors that weaves through every gallery. Front-facing staff, or what the museum calls Visitor Experience Associates (VE), are themselves spread out along the pathway to assist as visitors move through the exhibitions. 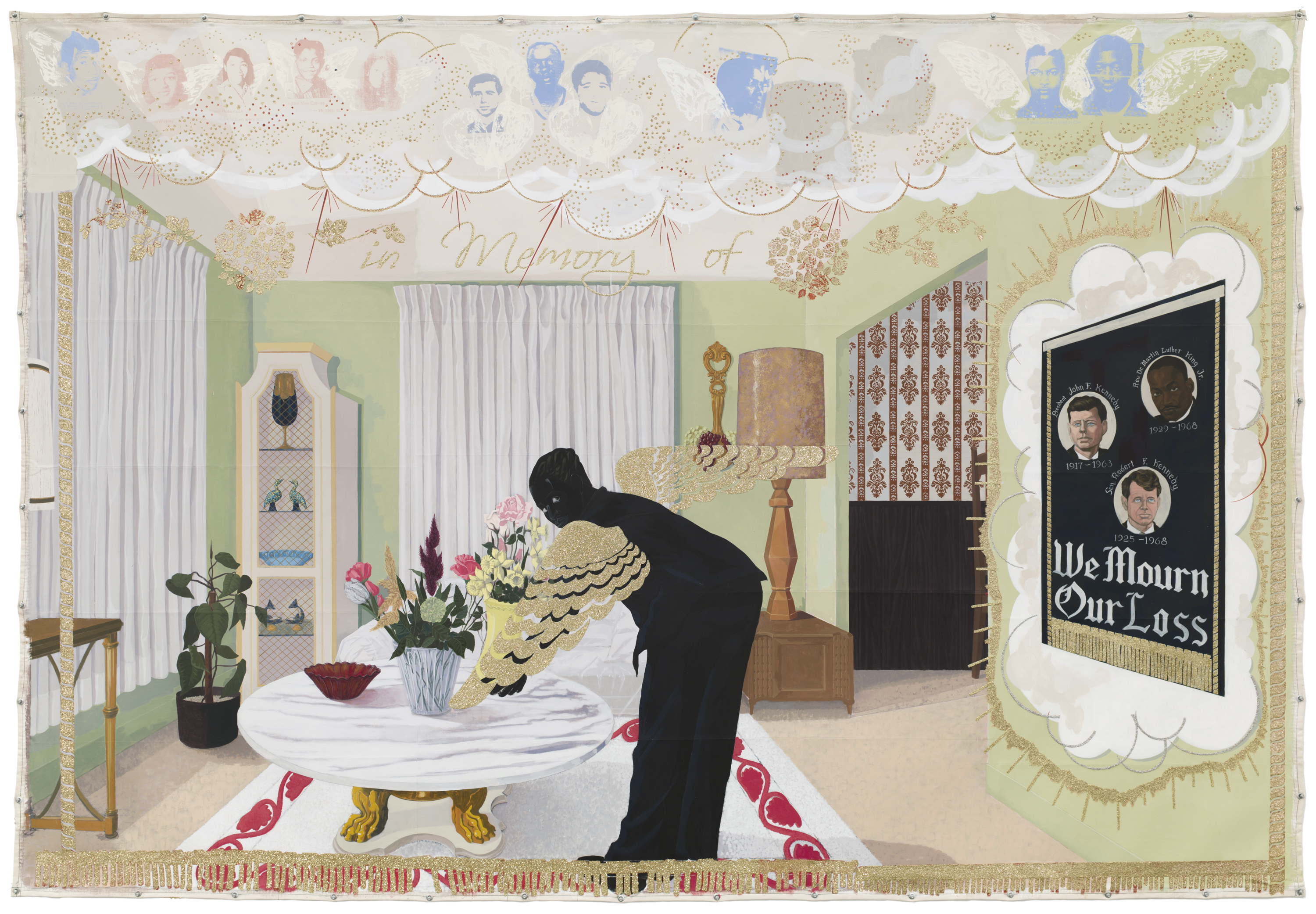 “Souvenir I,” by Kerry James Marshall. Photo courtesy of the MCA.

Of the many works on view, one of the most noteworthy pieces at the MCA right now is “Souvenir I” by Kerry James Marshall. Rendered with acrylic on canvas, a black figure leans over a dining table in a nondescript green dining room as he makes intimate eye contact with the viewer. Golden wings sprout from his back. Behind him, a version of Marshall’s own 1997 “We Mourn Our Loss” hangs on the wall. His piece is about Blackness and its place in a revisionist white history; he transforms scenes of familiarity — relatives’ living rooms, kitchenware, a portrait of Civil Rights leaders — into monuments. At well over 8’ wide, these scenes of Black daily life become something spectacular; the term “big screen” comes to mind.

Further down the pathway, Ramiro Gomez does something decidedly different. Where Marshall is known for mirroring the aggrandizing of white narratives to shine light on Black stories, Gomez directly criticizes these same white narratives within their own lenses. As Liz Ohanesian wrote last year for Los Angeles Magazine, Gomez “riffed on several of David Hockney’s L.A. paintings by including domestic workers in scenes inside modern homes.” “Alien vs. Citizen” features Gomez’s “Paul Smith Store, Los Angeles,” a strikingly simple painting that features a hot pink storefront, grey sidewalks, and a perfect, cloudless blue sky. The clandestinely colorblocked background is juxtaposed with a young man in the foreground carrying a leaf blower and making his way past the titular Paul Smith Store. This figure is depicted in realistic, high-contrast detail; the muscles of his forearm are visible as are the folds on his T-shirt and the shadow of his cap draping across his face. 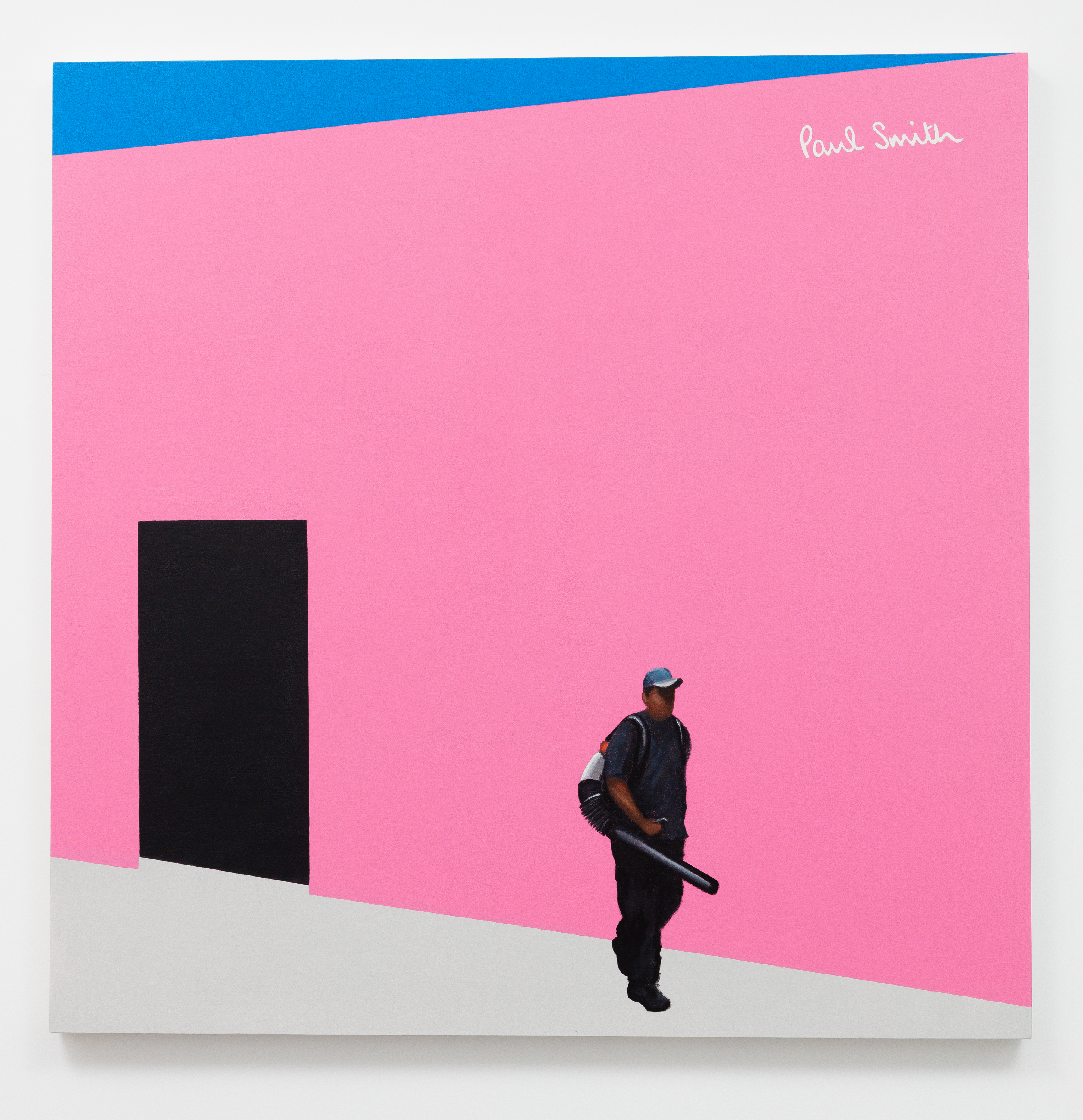 While Marshall and Gomez seem to be tackling vastly different topics, the MCA brings the two artists together (along with many others) for “Alien vs. Citizen”, a show revolving around “the way a person’s value is determined in the United States,” “inspired by conversations about the visas awarded to ‘aliens of extraordinary ability’ and other merit-based immigration policies.” In other words, the show claims to examine the American idea of meritocracy as a myth under capitalism, questioning the idea of ‘extraordinary ability’ and the dehumanization that occurs when humans are seen as a monetizable or otherwise consumable good.

“Alien vs. Citizen” is especially fascinating when we look at the different perspectives, privileges, and stories that collide to consider how America treats people. Of the artists featured, about one half are American-born and half of them are white. Every artist on the roster is established, including such indisputably big names as Glenn Ligon and Carrie Mae Weems. The works tackle that idea of how American commodifies people — in particular, racial minorities or immigrants (or both!) — in a host of ways, from the literal selling of humans, to the imbalance of a marriage/partner-based visa, to the underpaying and devaluing of immigrant labor. The MCA asserts that there is no alien versus citizen when America devalues the titular alien and citizen alike via that myth of merit.

The museum’s questioning of meritocracy stops unfortunately short of meta. The already-established artists of “Alien vs. Citizen” are undoubtedly to be considered people of “extraordinary ability”, to be treated as such by America-at-large and the MCA alike. What the museum ignores is anyone who hasn’t yet been deemed worthy of the meritus stamp and those privileges that come along with it. This lack of consideration extends beyond the show’s walls to the actions of the museum itself. In recent months, the MCA has come under fire for its handling of COVID-19 and of its staff in particular.

Despite over half of its employees indicating on an HR survey that they felt unsafe returning to work, the museum announced a planned reopening date for July 24. That same month, a group of over 80 employees under the name MCAccountable released a public statement criticizing the museum’s decision to reopen to the public, stating that they “feel it is dangerous, irresponsible, ableist, and racist to reopen the museum to the public in the midst of increasing COVID-19 cases, with only surface-level regard for the health and safety of front-facing staff in light of the ongoing pandemic”. The group also brought up concerns regarding the lack of healthcare benefits or hazard pay for front-facing staff who would effectively become frontline workers in the event of a reopening.

In response to the public scrutiny that MCAccountable was able to raise, Pritzker Director of the MCA Madeleine Grynsztejn promised last month that Visitor Experience (VE) staff would become “full-time associates” — a promotion that would come with healthcare benefits—and maintained that the museum would stay open. One problem is that a majority of VE staffers are students for whom full-time employment is just not feasible as the fall semester begins. But the larger issue at hand is that the MCA decided to have full-time associates by firing 20 of their 28 front-facing employees.

Mercel Curioso, a former VE staffer and current SAIC student, says that the museum let employees know about the layoffs via a group Zoom call. “They made us go through training to get ready for reopening in July to then smack us with this news a month later,” she admonishes. As ArtForum reports, an MCA spokesperson insisted that “those employees, who worked anywhere from 3 to 28 hours a week, are being offered severance”. Curioso is critical of this severance, telling us that “it doesn’t help us survive, especially during a time of pandemic”. For reference, Grynsztejn told the Steven Johnson & Howard Reich for the Chicago Tribune that the MCA’s endowment—a mere 14% of the museum’s annual funding, according to the MCA website—was $127 million as of July 23, an amount that she stated had to be protected “for the sake of our staff”. In comparison, according to Glassdoor, VE staff make $13 per hour. One has to wonder how much the museum is saving in firing 20 part-time staff to make 8 full-time. Which employees does Grynsztejn claim to protect with the endowment? Further, how much are the 30-odd artists featured in “Alien vs. Citizen”, one of six concurrent shows at the museum right now, being paid as compared to 20 more VE employees?

“Alien vs. Citizen” is on view at the MCA from now through February 21, 2021. In a much-emptier MCA you can see Gomez’s laborer in “Paul Smith Store, Los Angeles”, busy at work.

The Cut: Inside the July Layoffs at SAIC