How Apple became an accessory to Chinese government censorship. 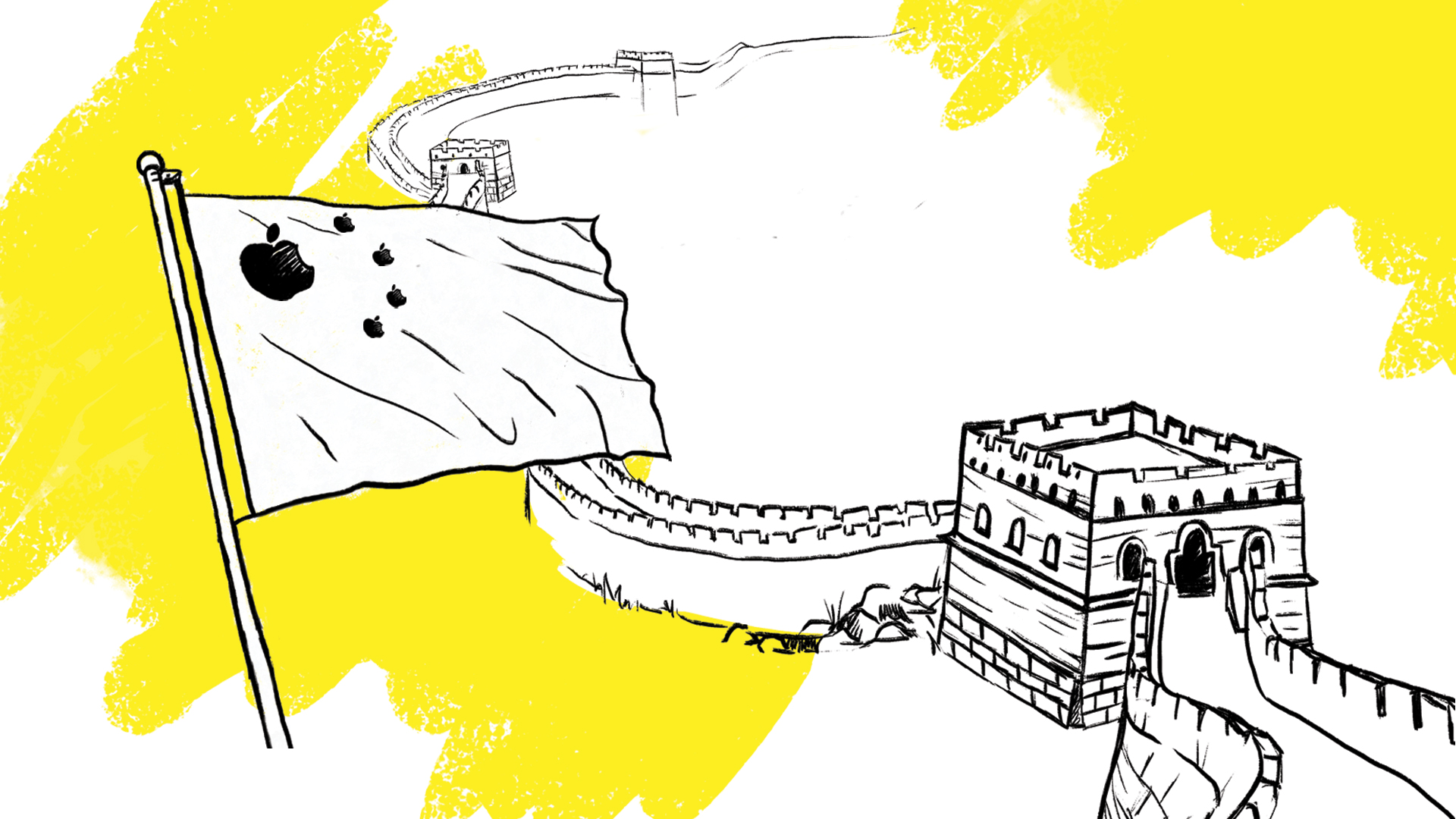 When Xi Jinping took office as President of China in 2013, he made it clear that he wanted his country to have access only to an internet that matched its government’s values. China has been restricting its citizens’ internet activity since the early 2000s, but Jinping’s administration invested in specialized technology to advance censorship and surveillance, providing foundational infrastructure to what is now called the Great Firewall of China. American tech giant Apple has since laid a few bricks on top.

The internet, of course, has always been good at scaling walls. For many years, Chinese citizens kept each other informed through blogging about political discrepancies, and using virtual private networks (VPNs) to gain access to restricted sites. But in 2017, Apple removed 674 VPN services from China’s App Store at its government’s request.

One year prior, Apple removed The New York Times app, too. The Great Firewall blocked The Times’ website in 2012, so the app served as the last means for citizens to read its content without specialized software, like a VPN. Upon removal, Apple did not disclose which of China’s laws that the app had violated. This, as The Times reports, limits the possibility of filing an appeal or challenging the government in any way.

Just before the removal of the apps, The Times was working on reports of how the Chinese government subsidizes the world’s biggest manufacturer of iPhone parts in the city of Zhengzhou. The factory is owned by Apple’s contractor Foxconn, which employs over one million Chinese workers. The Times’ 2016 report refers to the plant as “iPhone City” per Zhengzhou locals’ terminology, noting that, at the time, it could produce as many as 500,000 iPhones every day. This past September, China Labor Watch exposed the factory for illegally hiring temporary workers, implementing forced overtime, and neglecting to distribute bonuses to workers while pushing production of the iPhone 11. Apple has since acknowledged these violations of its work standards, but initially denied the claims.

During protests this past July, Quartz reported on Hong Kong demonstrators’ use of Apple’s AirDrop feature to share photos and videos of demonstrations with internet users on the other side of China’s Great Firewall, which censors most — if not all — press coverage of these events.

The protesters’ attempts at sharing content with mainlanders were deliberate; some Hong Kongers went as far as captioning AirDropped photos and videos with the simplified form of Chinese used by mainlanders, rather than their own native Cantonese.

Many of the files were also explanatory, intending to educate recipients on how China’s authoritarianism was brought about by the Tiananmen Square massacre in 1989. Other files contained QR codes that appeared to link to major Chinese mobile payment systems, but instead of accessing money, recipients would find information about the extradition law that set the present unrest into motion and why it isn’t worth it for mainlanders to support the law. Imagine receiving what looks like a Venmo payment from a stranger, only to find a link to a web page with eye-opening information about a topic you’ve only seen one side of. One Twitter user called these images “cheeky.”

So, AirDrop, a trademarked feature exclusive to Apple products, became a tool to subvert the censorship that the tech giant has since supported. This is not the only contradiction within Apple’s relationship with China.

Unlike its kindred monoliths, Facebook and Google (both of which are essentially banned in China), Apple sees China’s population of almost 1.4 billion not only as a booming consumer market, but also as a vast workforce. The company relies on Chinese factories for the majority of its production, which includes over 200 million iPhones annually, and its stock price tends to rise and fall depending on its sales in China, according to reports by The New York Times.

Upon criticism from U.S. senators regarding its involvement with the Chinese government and compliance in removing VPN apps in 2017, Apple responded: “We believe that Apple can best promote fundamental rights, including the right of free expression, by being engaged even where we may disagree with a particular country’s law.” This statement continues to set the tone for their relationship.

In mid-October, in the midst of fierce protesting, HKmap.live was the most downloaded travel app in Hong Kong for less than a week before Apple removed it with the explanation that it violated guidelines and “local laws.” The app, which still has a web location accessible at hkmap.live, depicts a map with icons to indicate the locations of police, riots and safe zones, helping both protesters and passive civilians to avoid encounters that might involve tear gas and water canons.

In a statement, Apple claimed that the Hong Kong Cybersecurity Technology Crime Bureau blamed the app for helping protestors, “target and ambush police, threaten public safety, and criminals have used it to victimize residents in areas where they know there is no law enforcement.”

At the time of the removal, the HKmap.live Twitter shared that Google had not removed the app from Android’s marketplace, where it saw half as many downloads as on the App Store. The account also tweeted: “HKmap is used by passerby, protesters, journalist, tourist, and even pro-government supporters. It might be hard for people outside to imagine tear gases in your neighborhood, train station, or your go-to shopping mall, but ~5000 of them is fired since June” [sic].

Apple released an update to iOS products in late September in which it altered the emoji keyboard for users in Hong Kong and Macau to hide Taiwan’s flag. The Chinese government does not acknowledge Taiwan as an autonomous state. The emoji is still accessible in apps and even through predictive text, but Apple’s incentives are clear. This micro-censorship of a political symbol might be even more powerful than words. As we move into the next decade, the question of free speech must extend beyond national borders and into the digital, global marketplace.

This article was updated on Nov. 13 to correct a spelling error.