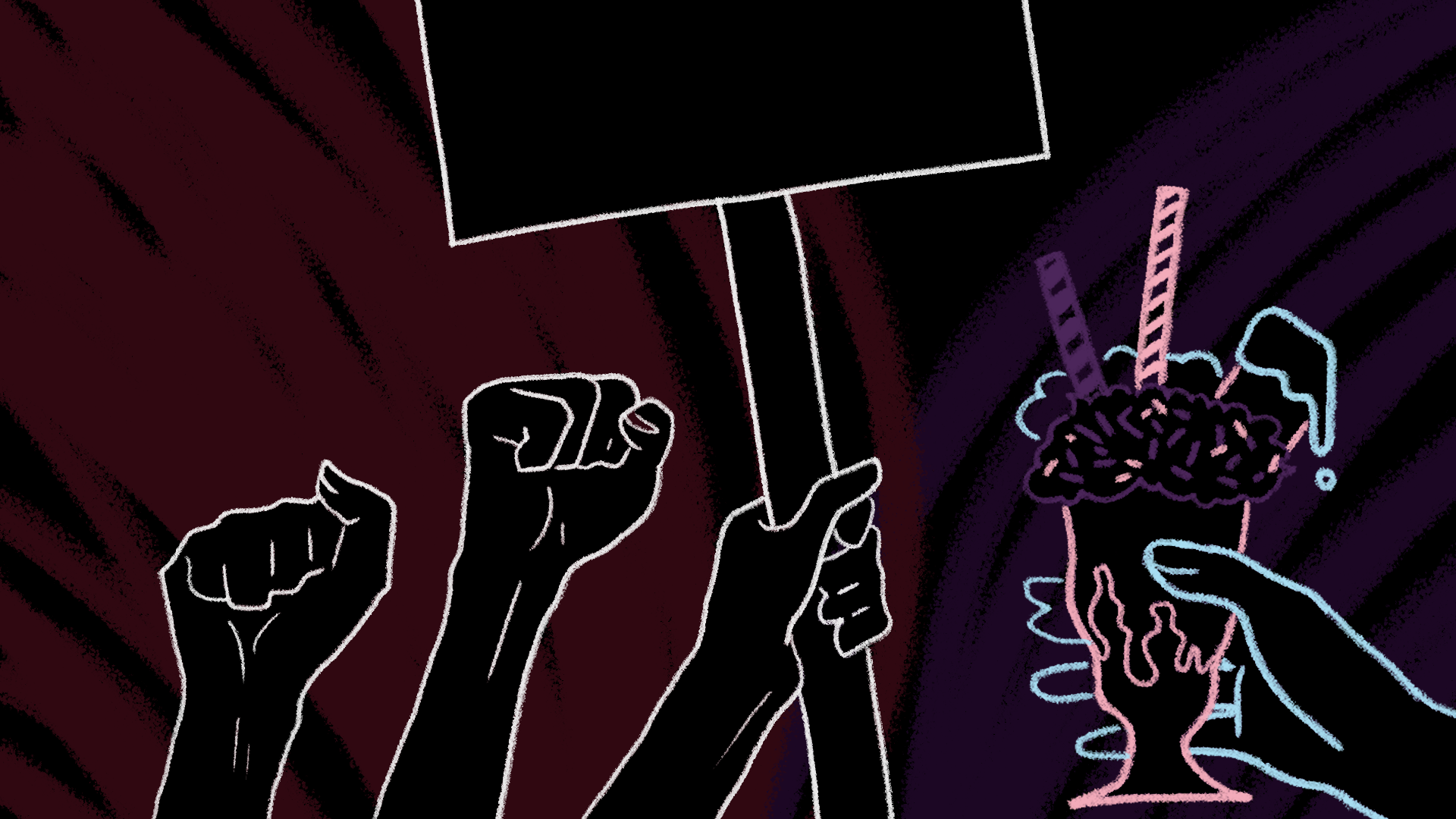 On a warm night in early August, a small band of individuals carry as many crudely made signs as their arms can hold. They are questioned by passing tourists and residents alike, and respond to these questions with an impassioned speech, something memorized simply by saying it over and over. “A worker has not been paid wages that he is owed! We are on our way to hold the business accountable.” As they make their way through the streets of Chicago, two things are glaringly clear: there are no more than six people, and they have a very particular destination in mind.

That destination is Jojo’s Milk Bar. Located in River North, the Milk Bar describes itself as “The next generation milk bar with over the top milk shakes [sic] and pastries including jumbo cookie flights with infused milks, designer pop tarts and frozen milk bars.” The restaurant/dessert bar is incredibly expensive, incredibly over the top, and relies on a certain carefree quirkiness that can be enjoyed only by those who can afford it. Still, owning a certain kind of restaurant is not a crime. Jojo’s Milk Bar, much like any restaurant, has its fair share of negative reviews, including complaints about the over-the-top milkshake embellishments an incident of spilled tomato soup on expensive sneakers. However, Jojo’s is guilty of something far worse.

In mid-July of this year, Federico Ramirez reached out to his community and asked for help. He no longer worked at JoJo’s Milk Bar, but they had not paid him his last paycheck, totaling $545. When Federico put out the call, the Little Village Solidarity Network answered. The LVSN is a self-described “Mutual support organization for workers and tenants based in the Little Village neighborhood of Chicago.” Immediately, the LVSN began work with Federico so that they might get him his paycheck.

The first step, well documented by the LVSN’s social media, was a meeting with the management of Jojo’s Milk Bar. Ramirez and the LVSN reached out to management, hoping to facilitate a meeting where the issue could be resolved. According to the LVSN, Jojo’s representatives agreed to a meeting with Ramirez and a member from the solidarity network. (Jojo’s could not be reached for comment.) It was promised that Ramirez would receive his paycheck during this meeting, and that the issue would be resolved in a friendly manner. However, on July 19th, when Federico and his representative from LVSN arrived at Jojo’s Milk Bar for their meeting, they were quickly escorted from the premises by a security guard.

Immediately, LVSN began planning a response. Supporters quickly began flooding the Milk Bar’s social media with posts and reviews. All that was left was a picket. On that warm night of August 3, six people arrived in front of Jojo’s Milk Bar. They were led by LVSN member Alberto “Beto” Vazquez. Passersby watched with varying degrees of interest as the protestors readied their signs. The posters were simple and to the point, with phrases like: “RATS @ JOJO’S” or “JOJO’s ARE WAGE THIEVES.” The most succinct sign, however, simply said, “FUCK JOJO’S.” Those walking by grinned as they read the protest signs. Just another night in Chicago, just another labor protest.

When the chants began, the protestors rotated in a small circle outside the doors of the restaurant. The chants were simple at first, with cries of, “Wage thieves, wage thieves!” and “Fuck you, Jojo’s!” While the picket circled the sidewalk, another protester intercepted those walking by, handing out fliers explaining the situation and having conversations with those willing to stop and talk. It was a busy Saturday night. As customers entered the Milk Bar, protestors yelled after them, “Make sure you tip your server! They might not get paid!”

It didn’t take long for management to make an appearance. An employee was quickly placed at the door, presumably to prevent protestors from entering the establishment. Eventually, the owner, Robbie Schloss, emerged from the restaurant. While he could not be reached for comment after the picket, Schloss provided some colorful commentary during the four hours that the protest was occurring. Two participants Noah and Garrett (who declined to give surnames), noted that Schloss became increasingly irate as the evening went on. According to these eyewitnesses, Schloss was spouting crude language at protestors, attempting to bait protestors into physical altercations, and passing out fliers of his own making, which were copies of the protest fliers that had certain sentences crossed out. The police were called, but they did not interact with protestors since no laws were being broken.

While it may be impossible to know just how many customers were driven away from Jojo’s that night, a few individuals did come up to the picket line to let protestors know that they had been planning to dine at Jojo’s but would join the boycott and find another restaurant.

The night of picketing was long, and eventually the protestors dispersed without incident. The protesting would have continued on the following Tuesday, but since that Saturday was so successful, the original plan of daily protests was abandoned. The day after the Tuesday protest, Jojo’s conceded and delivered Federico Ramirez’s check. The LVSN posted this statement to their Facebook page: “Thank you to everyone who helped us fight the wage thieving bosses at Jojo’s Milk Bar! They finally paid up last week, after nearly a month of struggle, due to the pressure our picket was putting on their business. We more or less shut down their ice cream shop on the evenings of Saturday Aug. 3, and Tuesday, Aug. 6. They paid up on Wednesday, delivering a check for $545.00 to Federico Ramirez. It is important to emphasize that solidarity as it was manifested via collective direct action is what rendered these results possible. It wasn’t by appealing to attorneys or the department of labor. This is only a small sample size of what is possible if we organize!”

Slice of Life: At The Beach