Exclusive curator interviews examine how an iconic image casts an intimate and odd gaze upon the role and importance of mythos and story.

Hands Together: An Icon Incarnate from F Newsmagazine on Vimeo.

The Roger Brown Study Collection (RSBC) is a veritable wonder of art and found objects. Their current exhibit, “Hands Together: An Icon Incarnate,” casts an intimate and odd gaze upon the role and importance of religion, mythos and story in everyday life. The show originated from a consideration of German Renaissance painter Albrecht Dürer’s iconic image of a set of hands clasped in prayer. 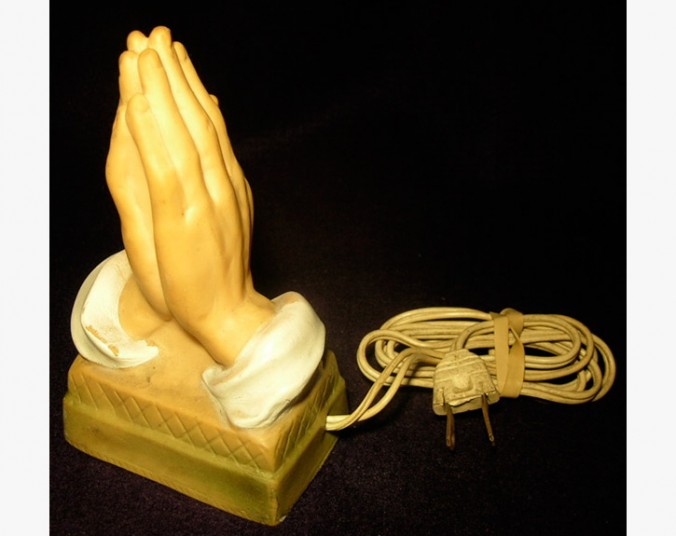 Located within the ground gallery and situated on a replica of artist Ray Yoshida’s shelves, the display itself is composed of SAIC Adjunct Associate Professor Rolf Achilles and curator Maral Hashemi’s collection of some fifty praying hands objects. These are flanked by several of Roger Brown’s own works, including “Virtual Still Life #16 Sake Cups And Four Big Sur Communion Chalices With Oral Roberts’ Vision Of A Two Mile High Jesus” (1995), “Veronica’s Landscape” (1988), and “Story of Creation” (1989), which all offer insight into the processes by which objects become icons and how story births myth. 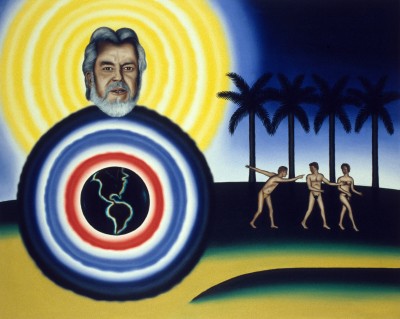 Upon first viewing “Hands Together,” I was immediately struck by the sheer array of functional and familiar objects such as candles, night lights, planters, cups, pencil sharpeners and ties cast in the seminal image of two hands clasped in prayer. Interestingly, this particular representation of praying hands on which the exhibit focuses originates from a figure on Dürer’s “Heller Altarpiece” (1507-1509). However, it must be mentioned that Dürer’s hands do not solely exist within the distant realms of history and artifact. Modern day myths, which have emerged from Christian revivalist and other enthusiastically religious Internet message boards, proclaim Dürer’s hands to be reminders of the unbreakable bond of familial love.

All versions of Dürer’s own tale bear O. Henry-like instances of dramatic irony and self-sacrifice. It begins with the young artist’s parents deciding if either he or his brother could go to art school. His family could not afford to send both brothers to school, so the child who was not chosen would be forced to find work in the nearby coal mines. Dürer’s brother volunteered to work a year at the mines so that the budding painter could attend art school for that time. The brothers would then switch positions at the end of the year. However, when Dürer returned home from school, his brother’s hands were so badly damaged from mine work that he would never be able to attend art school. Dürer used his brother’s hands a model for those of the praying Apostle on the “Heller Altarpiece” in remembrance of his sacrifice. 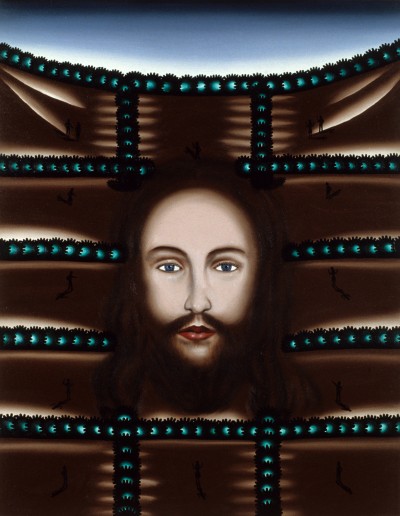 Roger Brown, Veronica’s Landscape, 1988, oil on canvas, 36 x 28 in. © The School of the Art Institute of Chicago and the Brown family.

It is crucial to remember that this story should not be taken as historical fact, especially considering that there were no mines where Dürer and his family lived in Germany. This legend is an example of how auras of gravitas and meaning are bestowed upon an image, and how such essential feeling and emotion can continue to live on within an item’s subsequent manifestations.

Roger Brown’s works showcased in the exhibit deal with this same interaction of myth and reality within the prosaic everyday. His “The Story of Creation” riffs off of Giovanni di Paolo’s “The Creation of the World and the Expulsion From Paradise” (1445) by depicting Eden as a sight eerily similar to 1980s Los Angeles. The face of Kenny Rogers stands in for the figure of God, a sardonic comment on the power of celebrity.

In contrast to the multiple points of contact within “The Story of Creation,” “Veronica’s Landscape” is an enigma. A landscape consists of Christ’s face ceaselessly observing the viewer on a sparse landscape, with perspective folded and curved in a manner reminiscent of the biblical Veronica’s veil. 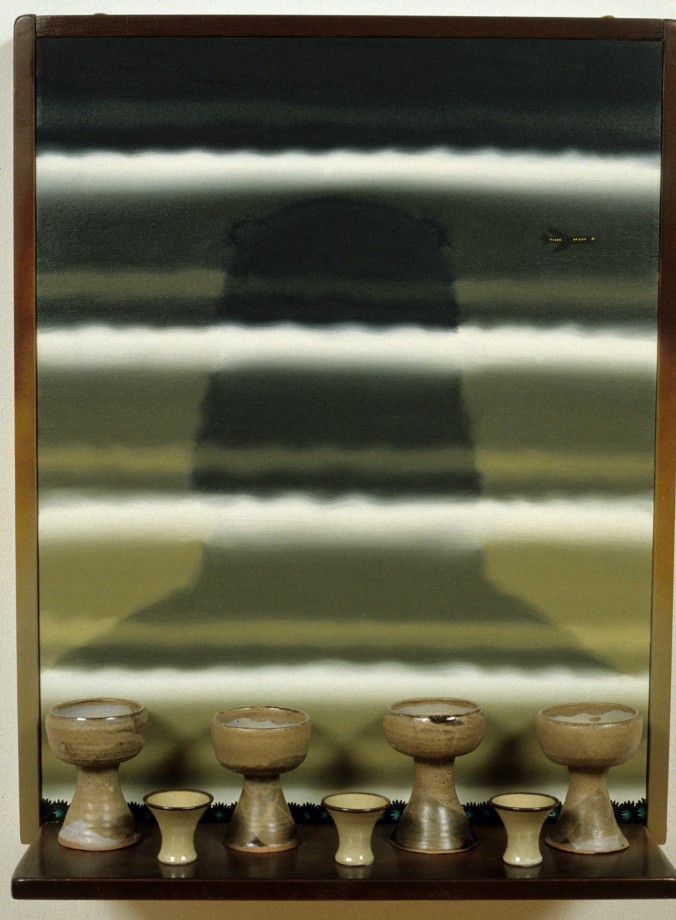 The final piece, “Virtual Still Life #16 Sake Cups And Four Big Sur Communion Chalices With Oral Roberts’ Vision Of A Two Mile High Jesus,” retains the hard-eyed appraisal of “Story” with the elusive imagery of Veronica by combining Roberts’ evangelistic visions of a giant Christ with the frailty and confusion of any human interaction with the unknown. Only a minuscule airplane meekly zooms by Brown’s image of a shadowy Christ looming large in the background while the sake cups sit similar to impassive communion chalices.

As a whole, “Hands Together: An Icon Incarnate” encourages viewers to perceive the importance and beauty of the everyday. It also displays how distinctions such as the “conventional” and delineations between different forms of creation are detrimental to the full appreciation of what the unknown could possibly offer.

Hands Together: An Icon Incarnate runs through December 16, 2013 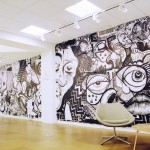