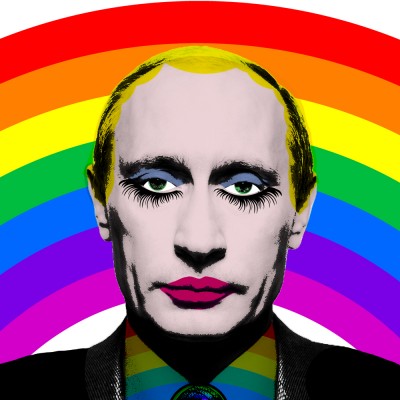 Drag Putin a la Warhol, via Putin A Rainbow

On a much darker note than the goofball absurdity of the recent “Super Bowl ring” debacle between Russian President Vladimir Putin and New England Patriots’ owner Robert Kraft, last Wednesday Putin publicly made some hollow statements in an attempt to placate the international backlash concerning the recent passing of Russia’s anti-LGBT law in June 2013 and the upcoming 2014 Winter Olympic games in Sochi (7-23 February). This law, which violates basic understandings of human rights and free speech, caused numerous protests in major metropolitan cities across the globe like Toronto, Barcelona and Paris. It also ignited the concerns of the International Olympic Committee who had called attention to the fact that LGBT Olympians or fans could make gestures, statements or actions that might be considered illegal under the intentionally vague and all encompassing rubric of the anti-LGBT law in question.

On Sept. 4th, Russia’s First Channel television network hosted Putin, where he claimed that, “We can be absolutely sure that Russia will support the principles of Olympism, which don’t allow discrimination of people on any basis, either ethnicity or gender or … sexual orientation.”

In an almost complete denial about the overtly hostile environment for LGBT individuals living in and visiting Russia, Putin also claimed that international media outlets were making the law into a much larger issue than it should be. He stated, “There is no need to turn a fly into an elephant. Nothing frightful and horrible is going on in our country.”

The Smell of Snow