“New Work” at the Sullivan Galleries Fails to Cohere

“…at what point do we try to make sense of the dialogue at hand? Since all of the work in “New Work” was synthesized from the same academic soup, there are bound to be competing theories, issues and approaches that breed a tension in the art school atmosphere. Addressing the contrasting ideologies at SAIC would be a welcome break from the opened-ended conversation that is fruitful in the halls of art school, but creates a weak broth inside the walls of the gallery.” 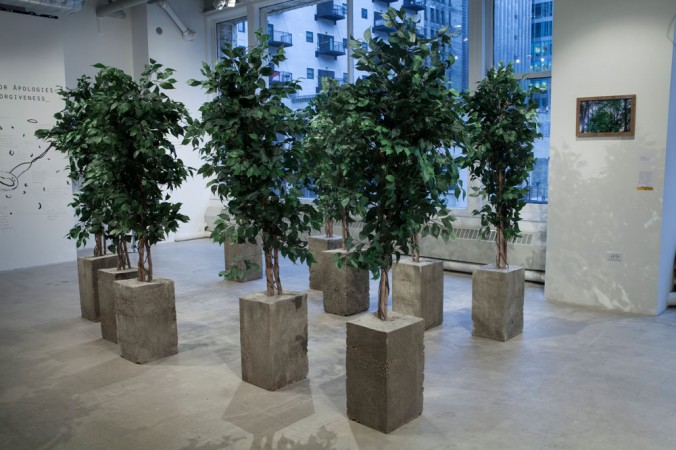 What is “New Work?” The curators for the show currently on display at Sullivan Galleries seem to wrangle the vaguest language possible to describe the show: “ . . . a series of conversations about recent work through the integration of art and academics.” Uh, you mean recent and upcoming SAIC grads show some work together? The curators are cognizant that “newness” isn’t exactly a concept for a show, but rather a condition of work that is constantly churned out in art school. In trying to address this conundrum, they speculate what newness might be (a myth? a threshold?), and they ask each artist to do the same, posting their thoughts about newness by the title cards of their work. Unfortunately, their best effort to have a critical dialogue about newness falls short of being revelatory or even engaging. Though the curatorial concept is diluted, the work itself is ambitious and provocative, and as we are painfully aware, made by artists in close proximity to their graduation at SAIC. So what does that mean? “New Work” is a milestone of artwork at SAIC, but takes a hands-off approach in addressing the critical issues that permeate dialogue within the school. 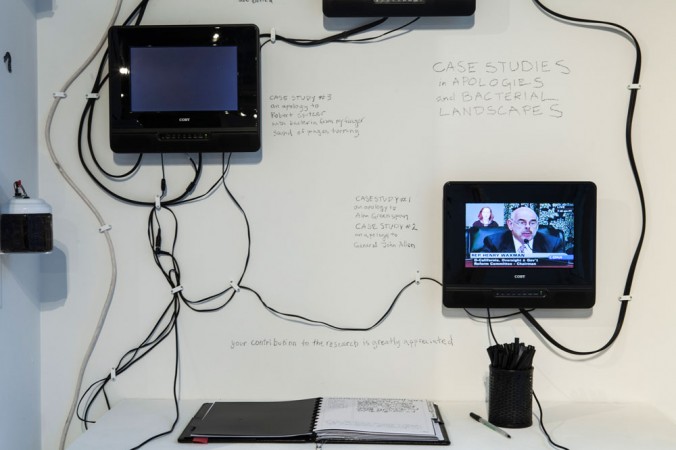 “A Lab for Apologies and Forgiveness,” Moe Beitiks.

“New Work” features a diverse roster with all manner of media represented and arranged in vignettes meant to conceptually reinforce one another. It is particularly satisfying to see Lesley Jackson’s installation “Nature Parkway” in the Sullivan Galleries, after months in its outdoor location in front of the Columbus building. “Nature Parkway,” consists of 12 fake trees, each of their “roots” cast into a concrete block. Viewing “Nature Parkway” on the concrete floor of Sullivan creates a new logic for the piece, where the trees become part of the ecosystem of the gallery, rather than an alien presence in the natural landscape.

A walk down “Nature Parkway” leads to Meghan Moe Beitiks’s video installation, “A Lab for Apologies and Forgiveness.” The piece is a makeshift laboratory where viewers can examine soil samples, read and write notes of apology in a black binder, and watch the artist confront a congressional hearing about the environment via video. The juxtaposition of Jackson and Beitiks’s work offers an interesting contrast of approaches in addressing ideas of nature. Jackson’s sculptures have a stoic physicality, while Betkis’s piece invites interaction, and even action on the part of the viewer. The tension between the two highlights a difference in new work coming out of SAIC between engaging in a formal practice versus a social practice. 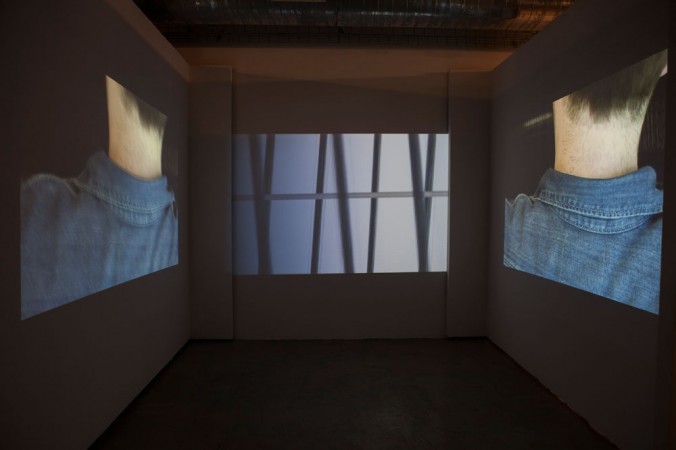 In a neighboring space, Marla Sanvick’s “She Stretches. She Works At It” includes a series of handmade garment sculptures and accompanying video and poetry. Each garment is a kind of emotional prosthetic that Sanvick performs with on video. In “She Stretches. She Works At It,” a flesh-colored sleeve sits on a chair next to Sanvick, and lightly caresses her leg. As she turns away a piece of shiny fabric gingerly falls off her leg, echoing a familiar moment one might have with a tenuous date, tolerating an unwelcome advance, or noticing the loss of connection. In the adjacent gallery, Jean Paul Morabito presents a booming three-channel video projection titled “Oh Production, Forever More Production.” Each of the large-scale projections features a cropped view of the denim weaving process, with hands, feet and yarn, each winding, striking and shuttling across the frames. While these two pieces share common ground (both use textiles and performance), their proximity didn’t seem to breed a connection. Sanvick’s poetic and self-conscious videos have a delicate sensibility that beg for an equally sensitive neighbor. Morabito’s installation operates on a different wavelength, creating a labor-intensive cacophony that speaks to issues of repetition, endurance and skill embedded in the craft process.

One of the more stunning works on view is Hae-Shin Chung’s installation consisting of three pieces, each titled “Sacrifice” (2012). A series of saw horses, with objects such as birds, lanterns and houses perched on top and underneath them, stand in line along the wall of the gallery. The sculptures appear to be covered in a frosty jewel-toned substance. Only from reading the title card can you find out that the substance is actually hot glue, which is so thoroughly transformed it is unrecognizable as such. Chung’s pieces have the futuristic feel of a Mathew Barney sculpture without having the coldness that gives Barney’s work the air of scientific authority. The sculptures are uncanny, and the juxtaposition of symbols and textures create a surreal and mysterious effect. “Sacrifice” might have been a more welcome companion to Sanvick’s work, with overlapping interest in touch and poetry. 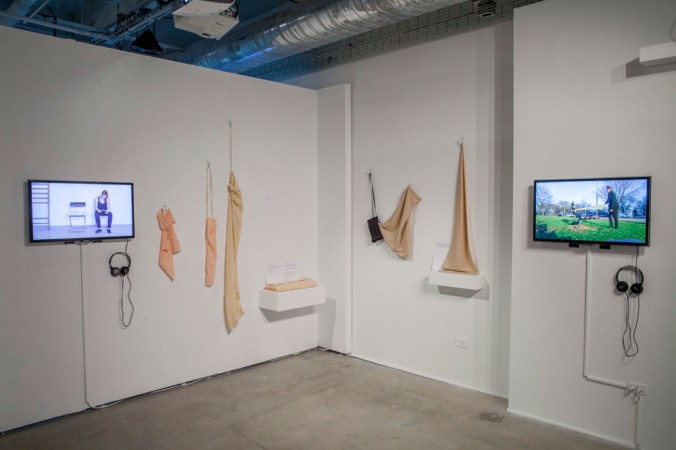 “She Stretches. She Works at It,” Marla Sanvick.

Another stand-out piece is Rodrigo Lara’s large floor installation “Dismembered Bodies Memorial (Memorial de Cuerpos Desmembrados).” Stoneware body parts are scattered across the floor, as if an epic sculpture had crumbled and cracked into pieces. But inside the severed joints one can see that there is actually (clay) flesh and bone and that it is not simply a crumbled sculpture. Additionally, greenery grows from the ends of the severed limbs. The scene recalls the Shelley poem “Ozymandias,” but the titles point to something even darker, a memorial to bodies that were mutilated, and never recovered — transformed back into earth.

The framing of “New Work” as a conversation is undoubtedly an extension of the progressive SAIC philosophy, whose semesters are bookmarked not with grades or any evaluative processes, but generous critiques that tend toward encouraging conversations, and offerings of advice and input. But, at what point do we try to make sense of the dialogue at hand? Since all the work in “New Work” was synthesized from the same academic soup, there are bound to be competing theories, issues and approaches that breed a tension in the art school atmosphere. Addressing the contrasting ideologies at SAIC would be a welcome break from the opened-ended conversation that is fruitful in the halls of art school, but creates a weak broth inside the walls of the gallery. 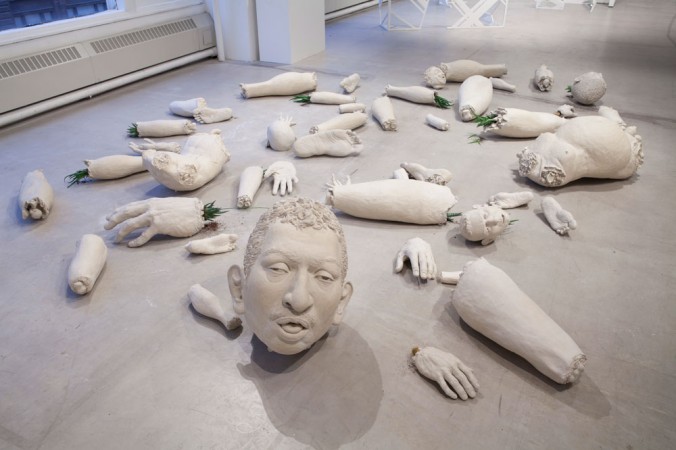 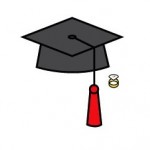 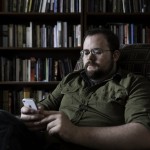