Tweet
Nigel Godrich is best known as Radiohead’s invisible sonic sculptor and “sixth member” as the band’s exclusive producer. If you’ve ever admired the claustrophobic and paranoid synthscapes of Kid A (2000) or the detached and icy guitar crunch of OK Computer (1997) then you’re familiar with his production. Godrich is also a member of the band Atoms for Peace alongside Radiohead’s Thom Yorke and Flea from the Red Hot Chili Peppers. His newest project is Ultraista, with singer Laura Bettinson and producer/multi-instrumentalist Joey Waronker (Atoms for Peace, Beck, the Smashing Pumpkins).

The group takes their name from a Spanish literary movement that took place between 1918 and 1922. The Ultraists fundamentally opposed ornamental artifacts, and though Godrich’s production is anything but sparse (however clean and discernable the multitudes of parts are), Bettinson told ilikemusic.com  that the Ultraists poetic style “worked with the way we made the music; add that bit, add that bit, keep the lyrics quite fluid and abstract.”

Listening to Laura Bettinson’s previous work as Dimbleby & Capper, it’s easy to imagine what potential Godrich heard when he saw her perform in Sheffield, England in 2009. She was writing in a moody, aggressive genre of electronic pop music and he was about to begin working on Radiohead’s rhythmically focused the King of Limbs (2011). Godrich and Waronker expanded on Bettinson’s style and replaced some of her theatrical tendencies and distorted homemade beats with decorative art-rock percussion and heady synth textures. Bettinson’s vocals remain remote and cooly reserved throughout the album. The result is a complex and hypnotic listening experience.

Bettinson rises to the expectations of the high profile collaboration on “Bad Insect.” The song began as a purely instrumental version that Godrich sent to Bettinson for her to record vocals over. The final product is the strongest direct vocal melody on the album, but Ultraista isn’t about star power or “lead” anything.

Throughout the album, the timbre of Bettinson’s vocals serve as another distinct part in the mix, but sounds best competing for the spotlight with percussion and dense layers of synth tones. The album is expertly mixed to this effect. The strongest example of this sonic collage work is “You’re Out,” in which bouncing loops of Bettinson’s soft vocals support a litling, almost spoken lead vocal. The menacing bass groove and vocals on “Strange Formula” are reminiscent of the sci-fi psychedelia of Broadcast, whose late singer Trish Keenan worked in a similar vein of haunting lullaby melodies.

The album finds its voice and style early and maintains it across ten tracks. This consistency makes for a strong cohesive listen, but the effect is lessened if you take Ultraista apart song by song. The mesmeric and chill moods of Ultraista make for an ideal late night headphone experience.

Machinations: Kinetic Sculpture in the Age of Open-source 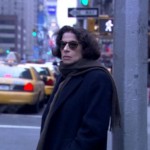 A State of the Union Conversation: An Evening with...