“1. We are the people. 2. We are united. 3. This occupation is not leaving.” -chant from the protesters in Grant Park on October 14. One of the loudest criticisms of the Occupy movements has been their lack of clear demands and goals. Without them, what are these protesters accomplishing by simply refusing to leave …

“1. We are the people. 2. We are united. 3. This occupation is not leaving.” -chant from the protesters in Grant Park on October 14.

One of the loudest criticisms of the Occupy movements has been their lack of clear demands and goals. Without them, what are these protesters accomplishing by simply refusing to leave a space? Why is this necessary and what does it hope to gain in a protest against corporate corruption? Are these people really aimless, violent youth, as the right wing media has described them, or does their lack of leadership and demands actually give them a more dynamic and meaningful message?

By remaining a horizontal movement, Occupy Chicago rejects the hierarchy that is inherent to the idea of the 99%. By remaining leaderless they stand apart from the narrow avenues of the two political parties and the bureaucracy of the government. They  challenge the effectiveness of any other method of making change based on years of movements fizzling out after a lack of media interest or financial sustainability.

But to achieve these rejections the occupations require bodies, voices and a sustained presence in one occupied space. By refusing to leave, and hopefully growing in numbers, they are demanding attention. They are asserting their constitutional right to peacefully assemble, and when they are forced to leave a space they are questioning how those rights are really upheld by the authority in our society.

Occupations challenge ownership and seek to redefine the space that they occupy. They decentralize political and economic power of that space. They put decision making into the hands of the people who are occupying that space. During the revolution in Egypt, occupied Ismailia Square was renamed Tahrir (Liberty) Square, and inside it the occupiers created a democratic community based on the needs and sustainability of the revolution, utilizing all public space for those needs. In Florida, the Take Back the Land organization formed in 2007 and began to organize homeless people to occupy a vacant lots and foreclosed homes. In New York, the occupation has built a community in Liberty (Zucotti) Park that 3000 civilians physically defended on Friday October 14 when the city attempted to clear the park for cleaning. The group successfully kept the park from being evicted, and put out a call for supplies to use for cleaning the park themselves.

By actively resisting ideological demands, the occupations are resisting the 1%. They are instead creating new spaces separate from the system run by the 1%, and refusing to leave them. This dynamic makes the questions of how the occupations are affecting policy makers and politicians irrelevant, because their message is inherently bigger than policy makers; it is revolutionary.

News The Politics of Not Moving
« Previous Story 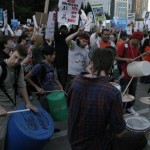