I’m currently writing this from Occupy Chicago, it’s 6:10 a.m., 67 degrees out. I was sitting next to a Marine and a homeless gentleman while talking to a 45-year-old man with five children and three grandchildren: all passionate individuals, clearly, if they’re here at this hour. We are all united in our desire for change and belief that occupation is the means to our goals. The group is diverse and people keep coming more and more. Around midnight a woman dropped off trays and trays of food and just now one man dropped off some breakfast sandwiches, another man dropped off a bag of food, and a woman set a fresh box of coffee next to me and walked off. People are here for us and we’re not alone.

It’s cold right now, maybe because I haven’t moved recently and it’s dark out. I just lent my phone charger away and have been here for many hours. We go in shifts, people come at night and others take the chance to sleep for a few hours at a space that has been donated to us for storage and such. The support grows day and day. It’s a hard battle upward, to help people recognize and see our insistence on maintaining our occupation. We’ve had to become completely mobilized due to city ordinances and calls for its enforcement, but at the same time, the Chicago police department has been extraordinarily kind and understanding. More and more everyday though, we are pushed back further and further. We are no longer allowed to sleep, sit, or have stationary tents and structures. We’ve had to adjust and make everything mobile and move most things into storage for the time being. This is only temporary because it’s only a matter of until we gain police union backing among many others. The movement is growing.

It’s now 7:22 a.m., I went to the sleeping location to check in, help get people up and going, as we have to be out of there by 6 a.m. I’m seated next to a light pole in front of a garbage can about a foot away from the curb because Bank of America security guards are now being told to keep us off their sidewalk. It’s okay though, I’ve taped my sign to my computer to write this, looking up to scream and shout with other occupiers as various individuals, cab drivers, waste management truck drivers, and bus drivers honk to show their support.

Around 7:45 a.m., Fox News came to interview one of the protesters. We prompted each other on how to act and discussed some talking points prior. It was a meager site, probably only twenty of us at the time and maybe ten in the crowd of the man being interviewed. The great part though is that around 1 p.m., when I had gotten a lift home to sleep for a couple hours, I saw the news clip. It wasn’t the best but the reporter specifically stated several times that this movement is growing and will not be stopping, as well as noting. Media coverage increases more and more and it’s all been pretty good. Each of us has been interviewed or had our pictures taken and our message is spreading. 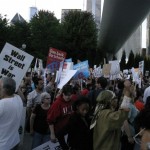