Artist Miranda July’s new movie “The Future” explores relationships and mid-life crises through the eyes (and paws) of an adopted cat named Paw-Paw.

Miranda July can see into the future, and it doesn’t involve flying cars and teleportation. In her new movie “The Future,” the artist, writer, and filmmaker depicts a world very much like the one we know today, give or take a talking cat and the ability to freeze time. Initially conceived as a performance, the new film explores relationships and mid-life crises through the eyes (and paws) of an adopted cat named Paw-Paw. July, who wrote, directed, and played the lead role (in addition to voicing Paw-Paw), presents the future as a concept that compels people to set irrational goals and enact life-altering fantasies.

July’s projects are so versatile that early videos like “The Amateurist” and “Atlanta” are distributed by the Video Data Bank—a contemporary arts nonprofit housed within the School of the Art Institute’s MacLean Center—while her 2005 film “Me You And Everyone We Know” (which won the Caméra d’Or at Cannes Film Festival) is distributed by IFC, and her 2007 collection of stories “No One Belongs Here More Than You” (which won the Frank O’Connor International Short Story Award) is published by Scribner.

In her new film “The Future,” which opened in Chicago this past weekend, July plays Sophie, a bored ballet teacher looking to transform her life into something more sensational. July’s performance background is obvious in scenes where Sophie videotapes herself choreographing a bizarre dance routine for YouTube, and later, creates a dance sequence while inside an amorphous yellow t-shirt. 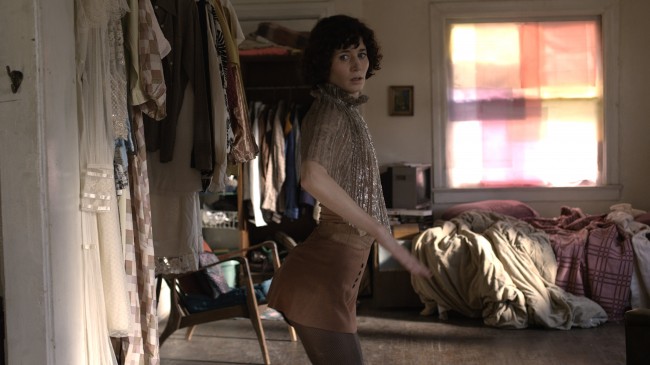 Miranda July as Sophie in "The Future," written and directed by Miranda July. Photo courtesy of Roadside Attractions.

When interviewed over the phone about the decision to translate a live performance into a feature-length narrative film, July said, “performance is once again very appealing to me right now and I think the immediacy and the somewhat spontaneity is what I was drawn into.” Although the talking cat and the time-stopping and the t-shirt dance were all elements of the original performance at The Kitchen, a contemporary art space in New York, July struggled with how to incorporate the spirit of audience participation into the movie.

“The couple was primarily played by a real couple from the audience who I would cast each night, and so, obviously that’s so different and can’t be done in a movie and meant that I had to kind of orchestrate it in ways that were totally different and approached narrative really differently,” said July, who eventually decided she was ready to take on her second feature-length movie, “and everything that comes with that, the sort of magic that comes with a real movie and not just a performance movie.”

During the original 2007 performance of what was then titled “Things We Don’t Understand and Definitely Are Not Going to Talk About,” two audience members were asked to kiss behind an illuminated screen and enact what July described as “an affair of passion.” She tried to pick couples that had been together for a long time and noted that “there was almost no night that the couple didn’t afterwards come up to [her] just totally stricken and really like they had just gone through this bizarre exorcism often of what their real story is.” She added, “I didn’t fully think that through, but it definitely added a layer.”

But as July adapted the performance into “The Future,” the idea of the affair (which she admitted is clichéd for a movie plot) became “more about this woman fleeing her life and more about the pressures of time and getting older.” 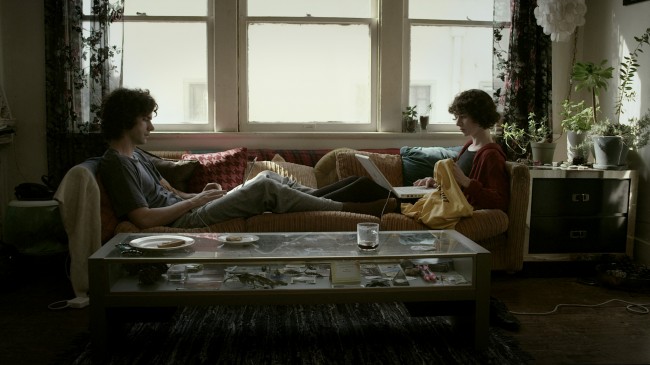 Miranda July as Sophie and Hamish Linklater as Jason in "The Future." Photo courtesy of Roadside Attractions.

Having to write the film script and think about casting left a lot of room for self-doubt, but “the things you realize you’re quite confident about, despite the fact that maybe no one else is, begin to kind of gain weight,” said July, “and those become like your legs.”

As an interdisciplinary artist, July is known for a body of work that encourages personal activism and viewer participation. In the book and web project “Learning to Love You More,” July and collaborator Harrell Fletcher proposed a series of assignments such as “climb to the top of a tree and take a picture of the view” or “make an encouraging banner,” and in her influential video chain-letter “Joanie 4 Jackie,” July compiled videos made by women and sent through the mail.

When it came to writing “The Future,” July said she wasn’t thinking about empowering her audience, but about “everyday struggles.” She continued, “When you’re making a movie it’s so tempting to make really amazing [characters] with really fundamentally interesting or valuable problems, you know? Like, there are so many worthy topics and I think in some ways it’s like wanting to go in opposition to that sometimes. It’s like, well what is the most basic struggle you could have? Like, literally to move, you know, and while on one level that seemed really embarrassing to me, like I don’t want to make a movie about that, I don’t even want to endure that in my own life for a moment, much less draw attention to it and do interviews about it. But on the other hand, that’s actually what most people have in common. Like, we diverge on a million things but that sort of fundamental experience of going through time and when you know what to do with yourself and when you don’t, like, I guess that seemed like so simple as to be worthwhile.” 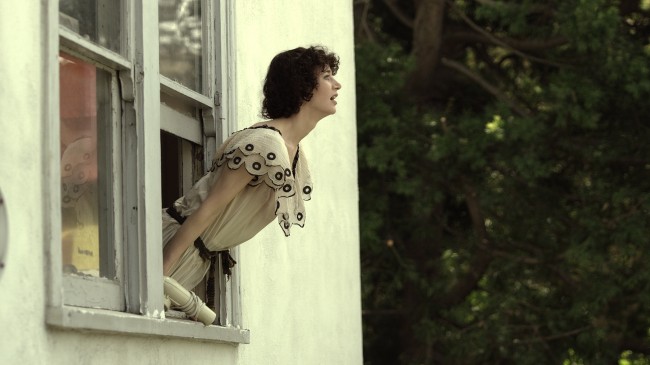 "Miranda July as Sophie in "The Future," written and directed by Miranda July. Photo courtesy of Roadside Attractions."

Although July works primarily from the unconscious, many of the characters and situations in “The Future” began as simple encounters from her own life. For example, the character called Joe is based on and played by a real person named Joe, whom July met through an ad in the penny saver classifieds in L.A. (She’s also currently finishing a book of interviews she conducted with different people—Joe included—who all sell things in L.A.)

The cat narrator named Paw-Paw also stemmed from July’s own life: “One day I was writing and a kind of bizarre thing happened outside my office, wherein I saw a real stray cat get hit by a car, and I was then burying this cat, and really pretty shocked, in a very sort of simplistic way, I remember thinking like, with god as my witness, I will redeem this cat,” July recalled, noting that the cat would “always be kind of very true, and very just, speaking things that you know, are hard to even feel, much less articulate.” Essentially, the cat is July’s way of understanding and talking about the “Things We Don’t Understand and Definitely Are Not Going to Talk About,” as the title of the original performance suggested.

The other character in “The Future” that reflects July’s own life is the city of Los Angeles itself, which she says “is pretty isolating, but […] actually so diverse that all you have to do is just a little bit of effort and you’re really in another place.” July adds that in L.A., there’s a sense that “you can stay in your own dream as long as you stay in your own apartment.” She added, “Which mostly, actually, I do.” 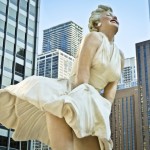 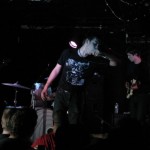