“NO GIRLS ALLOWED,” does, in fact, welcome women, but it presents art about being a dude and all the complexities inherent in the contemporary idea of male identity.

“NO GIRLS ALLOWED” at Peanut Gallery

A black scorpion shares an aquarium with a couple of ill-fated crickets beneath a banner with the words “Peanut Gallery” inside of a pentagram.“That’s Peanut, the official gallery pet,” says Kelly Reeves (MA New Arts Journalism, 2011). She and Charlie Megna, co-directors and curators of the space located in Room 345 of the Flat Iron Building, talk about putting Peanut the Scorpion in a plastic ball and letting him roll around, hamster-style, during openings.

The absurdity of that image is exactly what’s so appealing about the Peanut Gallery. Good art and community are central to this co-op style space, run by artists/collaborators/volunteers who are intent on keeping up the “spiciness,” as Reeves describes it, without the pretensions and formalities frequently found in the art world. “I don’t want to see your resume when you submit work,” she told F Newsmagazine. “I don’t care if you’re a first year BFA student or you’ve had solo shows at Tony Wight, as long as you’ve got some spark. I think there are plenty of galleries in the city catering to the MA/MFA/PHD SAIC crowd, and I’d like to cater to everyone.”

The gallery held its first show, the cat-themed “Pussy Galore,” in June, 2010, followed by a string of exhibitions with similarly self-explanatory titles, including “COLOR” “VACATION” and “GOD.” The title of the current show, “NO GIRLS ALLOWED,” is a bit of a misnomer; the exhibition does, in fact, welcome women, but it presents art about being a dude and all the complexities inherent in the contemporary idea of male identity. Artists Justin Nalley, Jack Edinger, Brandon Howe, and Megna, who also uses the space as his studio, are the “young, sassy, and sweaty” guys the exhibit is based around (and they’re all regular exhibitors at the Peanut Gallery). With masculine force, “NO GIRLS ALLOWED” delivers what it promises: blood, cars, and a whole lot of phalluses.

Edinger is a documentarian of wrestling culture, and his photos show the violence of the sport both inside and outside of the caged ring. A portrait of a shirtless guy stretched out on an ugly linoleum floor, holding his head next to the smashed table it clearly just met, is compositionally interesting, and kind of funny for a second in a Jackass sort of way — but then it suddenly isn’t. In another photo, the words on a wrestler’s briefs, “Made in Italy,” get lost in the crack of his well-tanned derriere, seeming to point to the very homoerotic aspects of what is considered in America today as a very hetero, masculine sport.

Nalley’s photos continue this observation of maleness in all its toughness, inflated all the more with the coming of age. Two boys sit on the hood of a Dodge with arms crossed and legs splayed, symmetrically framing an AC/DC sticker that shows through the back window. Other photos of a smiling, nude girl at night and a forearm with a crude, self-given tattoo show exactly where the boys are headed.

Masked characters are captured in cultish, violently charged moments by both Megna and Howe. Clay figures by Howe are literally dick-headed monsters with polka dot war paint, posed catatonically on a landscape of rocks and severed limbs. Less threatening, but equally curious, Megna casts tube-socked warriors in his world of the bizarre and macho. In his four gouache and India ink works on paper, there is a loose narrative about a mysterious tribe’s worship and torture, never fully appropriating motifs from black metal, rock and roll, and East Indian religious art, but coyly suggesting them.

Megna’s work, and the rest of the art in “NO GIRLS ALLOWED,” can be difficult to decipher, especially for the female of the species. But the show as a whole can be conveniently wrapped up and ready for consumption with Reeve’s charming description of the space she and Megna operate: “Peanut Gallery is full of sex, drugs and rock and roll — doused in Old Style and stuck in a bright white cube. With a scorpion.” 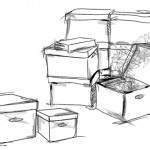 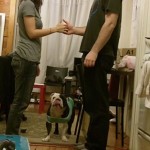 3 Responses to Sex, Drugs, Rock & Roll, and a Scorpion