The night before a historic election for Chicago’s mayor, it seemed like the excitement for the first race in more than 20 years that won’t include Mayor Richard M. Daley won’t be that close of a race after all. Of five people interviewed who had definitely decided to cast their votes tomorrow, almost all were voting for, or considering voting for, Rahm Emanuel.

Roy, a 45-year-old corporate office building manager leaving work, said he’ll definitely be choosing Emanuel when he visits the ballot box tomorrow — based on Emanuel’s love for the city, his experience and connection to the White House; and because he was born and raised in Chicago. Roy likes that Emanuel “isn’t in the union’s pockets” and so won’t be swayed by their opinions. As for the other candidates, he said he considered Carol Moseley Braun to be a “scumbag” based on some rumors of corruption, and he also didn’t trust Gery Chico, and hadn’t heard much about the other candidates.

Mandy, a 30-year-old resident of Wicker Park, was sporting a “Rahm for Mayor” button as she perused the food selection at Au Bon Pain. When questioned about her obvious choice for mayor, she said that in fact she had already voted for Emanuel in early voting. She was initially attracted to him as a candidate because he had worked closely with the Obama and the Clinton administration and he seemed devoted to lowering the crime rate of Chicago. “I agree with all of his policies,” she said.

Anthony, a 32-year-old manager of Starbucks who resides in Uptown, said he’d most likely vote for Emanuel tomorrow. To him, Emanuel felt “most complete” out of all the candidates, and seemed like he would be the best for the city. He hopes to see whoever wins the race bring Chicago out of this economic “hole that we’re in.”

Najjah, a 22-year-old student at Harold Washington and an employee of Walgreens, wasn’t comfortable revealing his choice out of the six candidates who will appear on the ballot, but said he’s basing his choice on college level education reform. Darrell, a 41-year-old security guard walking down Adams street, told us that he was deciding between Emanuel and Patricia Van Pelt Watkins, and he was most concerned with who knew the city better.

While it seems like Emanuel will take the election, anything could happen tomorrow. With Daley out of office for the first time since 1989, Chicago will most likely see some big changes no matter who wins. 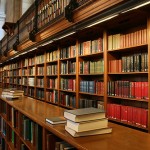 Taking the Polls to Libraries and Bookstores

Chicago Voters Say No to Pushovers, Opportunists; Yes to...