Chicago Voters Say No to Pushovers, Opportunists; Yes to Balls

By Lika Lopez de Victoria
On the frigid night before the Chicago mayoral election, a time when a hot wave of hope should be warming up the spirits of the city, the people’s feelings towards to the prospect of a new mayor appear as bleak as the winter weather they endure.
After Mayor Richard M. Daley announced last September that he was not running for a seventh term, it seemed like an opportune moment for a new face to bring necessary changes to one of the greatest cities of this nation.  Many showed interest, but the list was reduced to five contenders, who are up for the challenge of managing a city that suffers from a budgetary deficit in the hundreds of millions.  The top four candidates are former U.S. Senator Carol Moseley Braun, former Daley chief of staff Gery Chico, City Clerk Miguel del Valle and former White House chief of staff Rahm Emanuel.  Chicago’s mayoral race caught the attention of the national media when Emanuel’s candidacy was challenged because of residency requirements, but still, it seems like the constituents of the city hardly care or know about the election or the candidates.

Randy Martin, 27-year-old barista from Logan Square, admits that even though he doesn’t know who the candidates are, he registered to vote and he will do research online the night before the election to decide who will get his vote.  Fallon McWoodson, also 27 and a resident of a south side neighborhood, says that she will cast her vote in tomorrow’s election even though she declares, “I really just don’t know much about it.”

The few who know about the candidates seem to favor Rahm Emanuel, though not because of his fiscal plans or his ideas to reform the city’s public school system; but mostly because of his association with the Obama administration and his non-nonsense attitude.  Javier Guzman, 25, who resides near Midway and works as a manager for a fast-food restaurant in the Loop, says that he will vote for Emanuel because of his connections to the White House and because the other candidates seem fake.  Paige Wagenknect, 22-year-old reporter who resides in Lincoln Park, confides that she’ll vote for Emanuel too, mainly because “He’s not a pushover.”  She mentioned that if Emanuel had not been allowed to run, she would be torn between Chico and Del Valle, though perhaps she would end up favoring Chico because “it’s been a long time since we had a Republican, on the liberal side, running the city, and Del Valle is too nice for Chicago politics.”

While some lack motivation to participate in this election, Stuart Machek, 38, of Rogers Park, says that he registered to vote because that’s what his father, who passed away a few years ago, would’ve wanted. Even thought he uses expletives to describe Emanuel’s rough persona, he will support him in the election and in the April run-off, if needed, because he believes that “in the short-term, Rahm has the balls to accomplish the things Chicago needs, even if in the long run he turns out to be no better than Daley.”  He acknowledges that if Rahm had not been a contender, he would have voted for Del Valle. He said he would never consider voting for Moseley Braun, because he thinks that she is “an opportunist who has nothing good to offer the city”.
Dave Ortiz, 50, said he wishes he still lived in Chicago so he could vote for Del Valle, with whom he’s worked in the past. Ortiz, who now lives in the suburbs, said that with Emanuel as a candidate, “the others, especially a good guy like Del Valle, never a chance”. 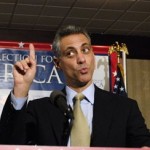 In the Windy City, Voters Are Stagnant