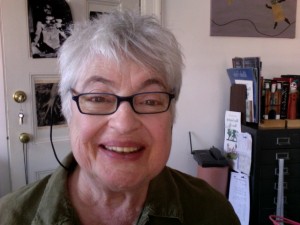 “I once asked him to write a book with a cat hero, but he said ‘in books, cats can only be villains,” Jeanne Steig said of her late husband William. “There was never a cat hero.”

William Steig, the cartoonist and author who is widely celebrated as the creator of Shrek, produced a massive volume of work throughout the course of a career that spanned over 70 years. Steig contributed to the New Yorker first in 1930, and wrote several children’s books including Shrek, Sylvester and the Magic Pebble, Rotten Island, and Doctor De Soto.

William passed away in 2003. For the past several years, his widow Jeanne has been busy compiling her husband’s unpublished drawings for a book that is scheduled for release in 2011 through Abrams Books. Jeanne has had to choose from a stack of 10,000 drawings.

Jeanne Steig is a visual artist herself. She sculpts stationary puppets using trash and found objects. She favors spontaniety in her practice, and credits Jean Dubuffet as her favorite artist. She has written children books also. Sometimes she collaborated with her late husband. “I did five [books] with Bill, and two on my own. So this [book project] is number eight.”

Within the collection of 10,000 drawings sits a curious mix of scenes from religious stories, caricatures of family members, beaming dancers with wildly contorting limbs, and a whole bunch of men with flamboyant mustaches. These works are aggressively playful, and always distinctly Steig: playful, free-spirited, with a childish sensibility. Steig also favored spontaniety over a more rigorous academic approach to producing work, and he wasn’t interested in anything the work itself didn’t reflect. 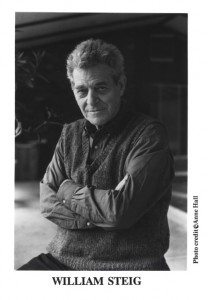 “We’ve chosen 800 drawings. Some are duplicates. All we have are the naked drawings. With some, you can tell from pencil marks or so forth whether they were from the New Yorker,” Jeanne said. “There will be at least 700 [drawings published]. It will be a very thick book. And Abrams always makes lovely books.”

William didn’t date his drawings, so it is often impossible to identify when these drawings were produced. “It’s a mix,” Jeanne says. “There is no way you could tell. He had them stacked up. You could have one that was done in 1930 between another one from 1950 and one from 2001.”

William didn’t seem to make a distintion between work and play. “Bill was incredibly prolific,” Jeanne said. “Some [of the drawings] he did just for himself that the New Yorker would not have been interested in. Some were rejected from the New Yorker. Bill was drawing all of the time. He didn’t think of it as working.”

William preferred to use a fountain pen and would often, according to Jeanne, watch his hand as he drew to see what appeared.

“He never had any idea what he was going to draw, unless he was illustrating a book…which he found a bit inhibiting. Bill was one of the cartoonists whose work didn’t require captions. Bill was much freer when he didn’t have to use them.”

He employed the same care-free, explorative approach in his practice as a writer. “He would sit down and say ‘Well, children like mice, because children like mice are small.’ Once he sat down to write a story, he’d start writing and the story would unfurl. He’d spend more time looking in the dictionary to find names than he would actually writing the book,” she said. “Once he drew a pig hanging from a tree, and decided to incorporate this into a book where the pig had been hung but hadn’t died. That book was titled Roland the Minstrel Pig.”

William Steig did not anticipate his book Shrek becoming such a success. “He did it for fun. One day he said, ‘Oh, I think I’ll do a book about a monster.’ I said, ‘Well, a monster…he’s green…he has horns,” and the rest is history. “People who don’t know his body of work are more impressed with Shrek than anything. Not that Shrek wasn’t a lovely piece and part of his body of work.”

The Brooklyn Museum took a number of William Steig’s drawings, and it is anticipated that they will host a show that will coincide with the release of the book. The Art Institute of Chicago is working to aquire original drawings of Steig’s as well. According to Mark Pascale, the Art Institute currently only has one in their collection.

SAIC undergraduate Emma James is William Steig’s granddaughter. For her, it is “extremely gratifying that his work is being incorporated in the institution where I am studying. It keeps him close in memory.”

As an artist who was dually succesful at producing works that were both palatable to the masses and rich in personal expression, the publication of these works will be a blessing to the child within every adult, and the adult within every child.

4 Responses to Interview with Jeanne Steig