Designing "Good Enough" over "Great" Products: Can We Take Innovation Too Far?

In a recent issue of Wired magazine, Robert Capps details the success of the “good enough” product over that of the “great,” while Gary Wolf discusses why craigslist is “a failure” due to its adherence to a primitive interface and infrastructure. While designers have generally been pushed to either continously improve upon that which exists or create that which never existed, a fundamental question arises out of this situation: should that which is not broken be “fixed.” Is innovation always necessary? Read the two articles and decide for yourself.

Like Uncategorized Designing "Good Enough" over "Great" Products: Can We Take Innovation Too Far? 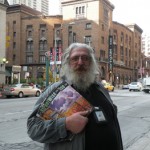 Word to the StreetWise