The Graphic Imperative, a traveling retrospective of international political posters from 1965 to 2005, is currently showing at Loyola University.

The Graphic Imperative, a traveling retrospective of international political posters from 1965 to 2005, is currently showing at Loyola University. The one hundred and twenty-one posters were selected based on a variety of factors: the ability of the artist to convey a complex conceptual message in a direct manner, the innovative use of imagery, subject matter of enduring rather than merely transitory interest, and above all, work which embodies and reaffirms the usefulness of the protest poster as a medium for social organization and change. The posters address a myriad of topics including the Vietnam War, AIDS, apartheid, abortion, literacy, and the September 11th attacks.

“Keep your rosaries out of my ovaries,” is one of the messages leaping out at visitors of the exhibition. The words are superimposed over the image of a Catholic priest. “War is not healthy for children and other living things,” proclaims the well-known Lorraine Schneider piece. Many of the images communicate with little or no actual text. An image of burning butterflies plunging to earth requires no words beyond the simple “Hiroshima Appeals.” From one wall, the Statue of Liberty gazes out from behind the shroud of a burqa. In another poster, Godzilla and King Kong gaze lovingly at one another, holding hands, over the word “peace.”

Perhaps the only weakness of the exhibit is that the images are so effective individually they don’t function well as a coherent group. The visitor can easily become disoriented by the many messages vying for attention. It is difficult to know where to begin, and it is easy to overlook gems within the collection simply due to sheer volume. To cover such a wide range of topics and such a broad time period is not a mistake, but it does seem to be a little too ambitious. Nevertheless, The Graphic Imperative is a moving demonstration of the power of the poster as a medium.

Although show will only be in Chicago until Dec.16, you can see essays and images from the show at www.thegraphicimperative.org. 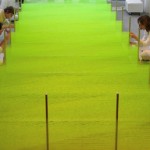 Not just scarves and sweaters: Fiber and Material Studies 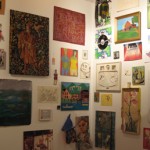