SAIC alumnus Jason Salavon spoke January 12 in the Fullerton Auditorium about how he borrows from popular culture, media, and memory–essentially accumulating and compressing data–to produce images that move beyond traditional photography.

An exhibition of photography entitled On the Scene, featuring works by Jessica Rowe, Jason Salavon, and Brian Ulrich, closed recently in Gallery 1 at the Art Institute. SAIC alumnus Jason Salavon spoke January 12 in the Fullerton Auditorium about how he borrows from popular culture, media, and memory–essentially accumulating and compressing data–to produce images that move beyond traditional photography. Salavon, whose parents were artists, was more science- and computer-oriented as a young adult, and less interested in art. It wasn’t until late in his undergraduate career, when he enrolled in a drawing course on a whim, that he began creating random, computerized drawings of patterns and cityscapes. His interest was in the programming of the computer, in the setting up a closed system for autonomous artmaking. Salavon continues to work with controlled chance.

In his Amalgamation Series, Salavon taxonomically approaches a noun or idea and explores the relationship, or the shared qualities, of things associated with that noun. So, in “LateNight” (2003) he taped 64 nights’ worth of late night talk show hosts Jay Leno, Conan O’Brien, and David Letterman and layered the audiovisual tapings, one on top of another, to create a triptych of video projections that hazily resemble late night television. On each screen, a fuzzy, ghost-like outline roughly corresponds to the host; the viewer is made aware of and becomes more sensitive to each comedian’s repetitive tics and patterns of movement in their nightly delivery. The Amalgamations are, in a sense, an averaging, of things that share the same name.

In “The Top Grossing Film of All Time, 1 x 1” (2000), Salavon broke the film Titanic into its individual frames. Each frame was then averaged to a single representative color–there are blue frames for the “I’m the king of the world” sequence, white ones for the iceberg, and long stretches of darker squares for the sinking of the ship–and arranged in narrative sequence from top left to bottom right. In “LateNight,” “The Top Grossing Film,” and his other works, Salavon strives to bring together multiple elements to tell a story, and address the question of how delineated these parts have to be for that story to be intelligible. 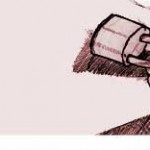