Difference and Diversity at SAIC 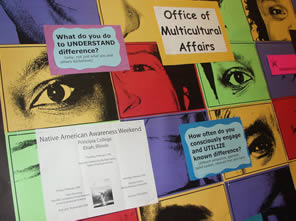 Although the “Harold Washington Incident” is in the past now, allotted its minute of infamy when James Yood refers to “Mirth and Girth,” the painting depicting the recently deceased Chicago Mayor Harold Washington in women’s lingerie, as “the only painting ever to be arrested,” the issues of racism and ignorance that the event laid bare still haunt SAIC today. Four years later a judge ruled that the three aldermen involved in the arrest of the painnting had violated Nelson’s first amendment rights, who was awarded damages from the city.

In the ideal world that exists somewhere in the pages of Susan Sontag’s books, all of us would internalize the impact of our actions upon Others. And we would consider that impact before acting. But we are not living in that world.The global Art World is still held up in some minor circles as a haven for immoral degenerates. SAIC makes no secret of the “Harold Washington Incident” and states that diversity is a foundation of its curriculum, from its First Year to the MFA and MA programs; diversity of opinions, practices and identities.

Diversity implies understanding, which can not co-exist with ignorance, which bars us from empathy with others, causing us to discriminate.The Office of Multicultural Affairs (OMA) was created in 1988, immediately after the “incident” to provide “support, advocacy and meditation” covering issues related to “inclusivity, representation and empowerment,” according to their misison statement SAIC launched its “Diversity Initiative” in 2001 and released the Self-Study Report which acknowledged that minority enrollment and retention figures were very low. The study noted that there is a “steady decline in Hispanic population, [there are] inconsistent populations of African American and American Indian/Alaskan Native [students].” It also noted that the majority of employees of color are employed in non-administrative positions and 96% of directors are White. Although the Study is now four years old a visual survey of the hallways, offices and classroom speaks to their continuing relevance.

OMA has just recently found a new director, James Britt, formerly an Academic Advisor at Oakton Community College and Director of African American Affairs at Northwestern University. He has been exposed to a wide variety of schools from the rural and diverse Virginia Commonwealth University where he got his Masters in Counseling Education and worked as an Academic Advisor and Graduate Residence Hall Director to the more “elite” and homogeneous Northwestern University. He sees SAIC as facing a similar problem as Northwestern in overcoming its “Air of Elitism.” He says that since this is an art school it “appears as if some people are open to differences, but only within a certain paradigm.”

Britt sees diversity as a collective responsibility in the school community, which can be explored within many different contexts such as OMA-sponsored events, discussions, critiques as well as a variety of lectures and artists’ talks that are continually ongoing at SAIC. A large number of faculty and students are working with issues of personal and cultural identity and are continually contributing to the dialogue on diversity.
Britt is excited to work in a school that is as multi-faceted as SAIC. He realizes the significance of the challenge of addressing not only issues of racial, ethnic and sexual but socio-economic diversity as well. He is realistic about his expectations. He is not hoping for a complete reversal in people’s attitudes, but is motivated by change on the intellectual and creative level in the school and hopes that progress will be made.