An early work by filmmaker Michael Snow titled “Jazz Band” is the first piece in the Corbett vs. Dempsey exhibition “Eye and Ear”.

An early work by filmmaker Michael Snow titled “Jazz Band” is the first piece in the Corbett vs. Dempsey exhibition Eye and Ear. The Canadian filmmaker is best known for his experimental films that often focus on music and the auditory. Yet it is not a film that makes its way into this exhibition, but a painting of a slightly Picasso-like abstraction of a jazz band. Snow created this work in 1947 and it highlights the origins of what would be his oeuvre–the fusion of modern art and music in his films.

Not only does Snow’s painting fit into the show, but Snow’s ideas seem to touch the entirety of the exhibition. The title is cut out of Snow’s film New York Eye and Ear Control that influences–and in some ways explicates–the exhibition’s theme of the intersection of visual art and music.

The bridge between music, film, and art also brings together the expertise of John Corbett and Jim Dempsey, the co-directors and co-owner’s of Corbett vs. Dempsey. Corbett, Adjunct Associate Professor, Sound; Liberal Arts; Art History, Theory, and Criticism is also a Chicago music critic noted for his Empty Bottle Jazz Series and reviews for the Chicago Reader, and Dempsey is the manager of the Gene Siskel Film Center as well as curator of its monthly series, “Music Movies.” In addition to their music and film contributions both Corbett and Dempsey have been prominent figures in the Chicago art scene curating independently at several venues. Starting Corbett vs. Dempsey in September of 2004 was a natural progression. The Damen Avenue gallery, a large room of brick walls and windows atop Dusty Grooves Records, is an interesting addition to Chicago’s art scene. Its unlikely location outside of gallery row, matches its unusual mission to display mid-century Chicago Modernism.

“We’re interested in neglected traditions,” John Corbett said, referring to the purpose of the gallery. Eye & Ear, Corbett vs. Dempsey’s fourth show, steps slightly outside its Modernist boundaries and presents a museum-worthy exhibition that reveals the little known artwork of some hard-hitters in music like jazz clarinetist Pee-Wee Russell and pianist Sun Ra. Conversely on display is the work by trained artists known little for their musical ventures like Jim Lutes, Professor, Chair, Painting and Drawing and Terry Nilssen-Love. While some of the work suggests a literal relationship to music, such as the original record album artwork created by Sun Ra and Christina Kubisch’s diagram for a sound performance piece, other works have a more subtle link to sound.

The most stunning work in the exhibition, painter Bob Thompson’s “The Sacking” does not instantly conjure up notions of the auditory. Known as an influential painter to the mid-century New York jazz scene, Thompson influenced several musical greats. According to Corbett, Thelonious Monk kept a small painting of Thompson’s in his pocket as inspiration for his music. In this case Thompson’s painting is far from pocket-sized, the canvas is large and covered in long strokes of paint overlaid in vibrating reds and grays that resemble the style of El Greco, only slightly flatter and more abstract.

At places, the exhibition has so much work that it is a cacophony of painting, drawing, graphic design, multimedia, and even stained glass. Some small cartoonish paintings by a few musicians pale in comparison to work like that of Thompson’s. But my favorite parts are some of the subtleties of the exhibition. In the corner of the gallery, behind the rear wall hangs paper decoupages by Jody Williams. Appropriated magazine photographs of scenes titled “Georgia Skin” and “Muhammed Ali vs. Sonny Liston” are hand painted, finely cut out and then layered in a meticulous– if not puzzlingly perfect– manner that portray the photographs as bas reliefs. Also delightful is Eddie Balchowsky’s small, mysterious painting “(deer/face)” and the sharp yet depthless space of Hal Rammel’s collaged pin-hole photographs.

In addition to the fifty-something artworks in Eye & Ear, a CD is offered as accompaniment to the exhibition. But, instead of a musical addition to the 2- and 3-D work, the CD presents a new juncture between the optic and sonic: The tracks are surprisingly visual. The first piece joins Michael Snow’s piano and the clarinet of Pee Wee Russell–who, according to Corbett, was so drunk in the recording session, he had to play while lying down. The never released track joins seven others, including Sun Ra’s naked voiced rendition of “I Don’t Believe in Love,” and Hal Rammel’s sound-scape recorded in Wisconsin. The latter seems to throw the listener into a lucid, yet non-linear narrative that is similar to viewing one of Rammel’s layered pin-hole photographs.

The CD, along with film screening and live performances in correlation with the show, make Eye & Ear a forum for ideas on the juncture of music and art. 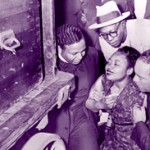