The truth about the lynching of Emmett Till was thought to have died along with him in 1955. But the new documentary, “The Untold Story of Emmett Till”, and the resurfacing of the immense amount of evidence regarding the case, prompted it to be reopened. 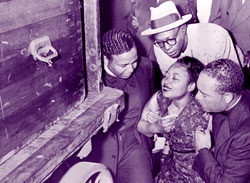 The truth about the lynching of Emmett Till was thought to have died along with him in 1955. But the new documentary, The Untold Story of Emmett Till, and the resurfacing of the immense amount of evidence regarding the case, prompted it to be reopened.

History was made when Mamie Till Mobley decided to have an open casket funeral for her son, who was brutally lynched while visiting family in Mississippi. The Civil Rights movement was sparked by a woman who was strong enough to show her brutally murdered son to the nation. The image of Emmett Till’s tortured corpse ended up in Jet magazine, which was circulated across the nation, putting a face to the horrific reality of lynching in the United States.

On August 20, 1955, fourteen-year-old Emmett Till, also known to his mother as “Bo,” rushed to the 12th Street train station in Chicago, on his way to visit his grand uncle. Several days after arriving at his uncle’s house in Mississippi, Emmett, along with a few of his cousins and friends, went to Money, Mississippi, to spend some of the money they had earned after a long day of picking cotton. Once Emmett and his friends arrived in Money, they headed to Bryant’s Store, a small convenience store, to purchase bubblegum and candy.

Upon leaving the store, Emmett allegedly whistled at Carolyn Bryant, wife of Roy Bryant, the owner of the store. At this time a black man whistling at a white woman was an unforgivable act. Three nights after this alleged act, Roy Bryant and J.W. Milam woke young Emmett out of his sleep and ripped him from his bed. Several days later, Emmett’s body was found floating in the Tallahatchie River, unrecognizable, with the exception of a ring he was wearing, and a seventy-pound fan tied to his feet. The condition of Emmett’s body was horrific: he was so badly beaten that his tongue was hanging out of his mouth, one of his eyes was gouged out, his teeth were knocked out, the bridge of his nose was smashed in, and he had been shot in the head.

Although Mississippi authorities attempted to bury Emmett Till before Mrs. Mobley had the opportunity to see the body, Mrs. Mobley ordered the body shipped to Chicago. Despite orders not to, she opened the casket so that the world could see the reality of racial hatred. Despite overwhelming evidence placing the murderers at the scene of the crime, an all-white jury found Roy Bryant and J.W. Milam not guilty of the murder of Emmett Till.

Twenty-six years later in Baton Rouge, a ten-year-old boy named Keith Beauchamp was inspired to seek justice for Emmett Till after seeing the picture of his ghastly remains in Jet. These images would stay with him for a lifetime and inspire him to produce the documentary film, The Untold Story of Emmett Till. Looking at the photograph, he recounts the moment he first saw the picture. “I was just ten years old, and I’m looking at this angelic face of a fourteen-year-old, and I’m looking at this horrific face beside it that looked like a monster, and I could not believe that a little boy could be brutally murdered for just a whistle.”

The image of Emmett Till reliving itself in his mind, Beauchamp, a young man growing up in the racially tense south, was constantly reminded, as many young black males were, not to let what happened to Emmett Till happen to him. Beauchamp was harshly reminded of the Till incident when out with friends one night. “I was beat up by an undercover police officer for dancing with a white girl who wasn’t even my girlfriend. They tied me to a chair, pistol-whipped me, all kinds of stuff.” Beauchamp describes this experience as the one that woke him up to the problems with which this country is stil plagued. 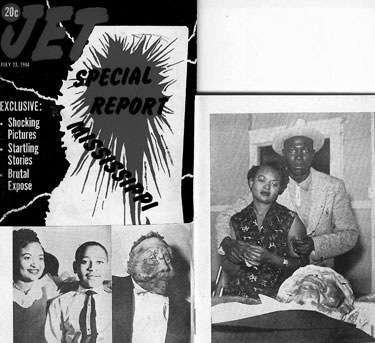 Beauchamp went on to study criminal justice at Southern University, but decided to leave to work with some friends in New York who owned their own production company. After doing work on music videos, Beauchamp was presented with the opportunity to produce a feature film, and the Emmett Till story was something he knew he had to do.

Beauchamp began doing preliminary research for this feature film when he came across something that took the project in a completely different direction and served as a catalyst for the reopening of the case.

Beauchamp uncovered the names of witnesses who had never testified and articles alluding to other people who may have been involved in the death of Emmett Till. This revelation led Beauchamp to embark on a nine-year journey of investigation, research, and interviews of key witnesses in the case, working very closely with Mrs. Mobley to get the case reopened.

Beauchamp recognizes the reopening of this case is an important catalyst to a reawakening of the United States consciousness of our racial history. He also sees it as a means of “waking up a whole new generation. Just bringing the Emmett Till case back to the forefront will help us all analyze, especially young people who don’t really know about the civil rights movement. It will help us all. I truly believe that this is our Civil Rights movement of today and this case is the catalyst for that.”

He explains, “We knew what we were doing with this, we knew it would start a domino effect. To have the Emmett Till case reopened is a catalyst, just like it was a catalyst in 1955, it will be a catalyst for change today, and that’s what’s happened and that’s what will continue to happen.”

Although both Beauchamp and Mrs. Mobley, who had worked for over forty-seven years to get her son’s murder case reopened, had an idea of what would happen, Mrs. Mobley’s untimely death in 2003 prevented her from seeing the result. The death of Mrs. Mobley, who became like a mother to Beauchamp, led to the pursuit of justice not only in the name of Emmett Till, but also for Mrs. Mobley.

Beauchamp hopes to be able to teach future generations, much like his predecessors and artists have inspired him. He says it is important “to continue to tell African American stories, so that Americans and the world won’t ever forget. Spielberg makes sure that we don’t forget the Jewish Holocaust. I want to keep our stories alive, I want to continue to tell our stories. I really, truly believe that by telling these stories continually, it can give us hope and make us better as a people, because you have to know your history and where you come from.”

Along with reawakening black consciousness, Beauchamp believes that this case is important to all people living in this country. “We still have a lot being put on us, we still have people being lynched, we still have police brutality, and we still have race hatred. We all benefit from the Civil Rights movement, people are having the chance to see what it was like in 1955.” 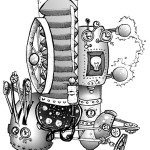