There is a pervasive myth about what going into a dark room means. Not any dark room, but a dark room with flickering images that cast shadows of reality into the back of a viewer’s mind. This is the cave. This is the entrance of the Carnegie International (open through March 20).

There is a pervasive myth about what going into a dark room means. Not any dark room, but a dark room with flickering images that cast shadows of reality into the back of a viewer’s mind. This is the cave. This is the entrance of the Carnegie International (open through March 20). Every four years Pittsburgh hosts this event in which the contemporary art world is given the space to raise a collective voice and perhaps impose itself on an audience that does not seek out the cryptic accomplishments of its more expressive parts. Certainly, the 38 artists selected revealed odd moments of reflection.

The audience is given no time to settle into any traditional introduction; the first room is filled with 40 televisions, each one mismatched with trash trophies, sitting on similarly idiosyncratic tables. The room is a collage of portraits, individual people from the Kuban’ community are each telling his own story. It is an impressive sight, demanding attention and therefore being an appropriate gateway to those things that come after, for instance, Nengudi sculptures made of nylon stockings that might otherwise be inaccessible.

This is the beginning of the dream. The whole show reads this way; it is a quiet passage where some dark violence is quietly breathing in the corner. There is the feeling that something has just happened and the simultaneous anticipation that something else is on the verge of becoming. The viewer passes from room to room taking in abandoned relics, each describing the not-so-silent subconscious of their makers.

Many of the paintings tell a story of decay. Mamma Andersson’s “Traveling with the Family” (2003) captures a family at a dinner table in which the mother’s hair is rendered with paint that looks like it is rotting. There is a Francis Alys stencil of a figure on the verge of public electrocution and above the door is an easily missed self-portrait of the artist requesting silence by bringing his index finger to his lips.

Given admission, we are able to glide like ghosts, through the various landscapes of private thought, satisfying our own voyeuristic appetite as we look at what artifacts men and women from all over the world have produced while wrestling with the weight of their own perceptions.

There is a wonderful moment in the Hall of Sculpture Balcony when the statuettes of the ancients are juxtaposed with contemporary pole dances in Philip-Lorca di Corcia’s series of larger than life photos of imperfectly shaped performers on poles mid-gymnastic routine. The dialogue that exists in the space between the statues in the permanent collection and the sharp slick noise of the di Corcia are fantastic, demonstrating a profound progression in the thoughts that inspire us when we reflect upon ourselves.

Katarzyna Kozyra’s video installation, “The Rite of Spring,” (1999/2004) is a bookend to “KUBA.” Kozyra took photos of old men and women, and, using a series of stills, re-animated them to jump and leap like flat marionettes with Stravinsky blaring overhead. The effect is mesmerizing; these old bodies are straining in the midst of violence, poverty, community they are crazed. They alternate sexes with puppet appendages that approach comedic proportions men become women and women likewise men, dancing in response to the libretto of death that awaits us.

And there is pervasive humor in the show. Moments of relief, whether it is simply one element of a piece, or the most blunt thrust of it and often when something genuinely dark is being expressed, humor is its handmaid.

And there are philosophical solutions. Mangelos is waiting near the end, with various sculptural globes, each suggesting a new approach. The old one we are accustomed to is a dead end.

And glory, glory hallelujah, the show ends with love. Carsten Holler installed “Solandra Greenhouse” (2004), a glass house filled with a vine whose flowers exude an exotic perfume. The aroma is sweet, the air warm and wet, and lining the box are red strobe lights intended to inspire the physical effects of love. I appreciated this conclusive reminder of what makes us rich in the darkness. 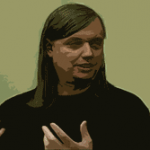