Carl Hammer Gallery, who has managed the estate of Henry Darger for the past 13 years, presented some of the last works to be bought by collectors and museums in a densely hung show of drawn, painted, and collaged examples from the artist’s lifelong visual and literary project, “The Story of the Vivian Girls, in what is Known as the Realms of the Unreal, of the Glandeco-Angelinian War Storm, Caused by the Child Slave Rebellion.”

Carl Hammer Gallery, who has managed the estate of Henry Darger for the past 13 years, presented some of the last works to be bought by collectors and museums in a densely hung show of drawn, painted, and collaged examples from the artist’s lifelong visual and literary project, “The Story of the Vivian Girls, in what is Known as the Realms of the Unreal, of the Glandeco-Angelinian War Storm, Caused by the Child Slave Rebellion.” The exhibition, titled Realms of the Unreal, is comprised mainly of large constructed paintings that would have been illustrations to the story in bound books. Some are as large as 110 inches in width and have completed works on both sides (they are hung so that the viewer is able to walk around them). Also included are drawings of maps, figures, and flags that supplement and give detail to the world that Darger created in his epic story.

Darger’s reclusive life has been well-documented. Born in 1892, he lived in an alley house at Adams and Monroe Streets until 1900 when he was put in a Catholic boy’s home by his crippled father (his mother died when he was four). At age thirteen, Darger was characterized as “feeble-minded” and placed in an institution, where he would stay until escaping three years later. In 1909 he began the series of books that would illustrate and tell the story of the “Vivian Girls”–the one and only project on which he worked up until his death in 1973. Living alone, working as a menial laborer in hospitals in order to get by, Darger appears to have spent the majority of his time and energy on 12 volumes of his 15,145-page typewritten book and its accompanying bound sets of paintings (several hundred separate pieces exist now).

In recent years his prominence in the American art world has skyrocketed on both the critical and market scales, making him arguably the most famous self-taught, or so-called “outsider” artist. Several of his works have been collected by the Museum of Modern Art in New York, and others were recently shown in The Ten Commandments exhibition at the Hygienne Museum in Dresden, Germany, a show featuring the significant forerunners of 21st century art. This is of course ironic for someone who never sold or showed his work. In fact Darger’s entire body of paintings and writings were “discovered” upon his death by his landlord, Chicago photographer Nathan Lerner.

In viewing Darger’s paintings, what becomes more interesting than the irony or drama of his life, is the insight into this man’s thinking and art-making process. Darger’s paintings, which were made on several layers of paper glued together, sit somewhere between intimate book illustration and heroic mural painting. He was a poor draftsman and relied on tracing his figures and images from magazines, newspapers, and coloring books–he drew hands and feet awkwardly. If the image was not scaled properly, he would take it to the photography counter at a near-by drugstore to have it enlarged or reduced. His compositions are dense with figures typically engaged in leisurely action or battle, set within wonderfully strange landscapes painted in watercolor. In “Are chased a long distance by Glandelinian Soldiery with bloodhounds,” Darger creates a heavily peopled landscape that wavers between illusion and artifice. The relationship between people makes sense in some places and appears illogical in others. The climate and land also move between believability and fantasy.

There is no doubt that these works are well-crafted and often beautiful. But he made hundreds of them and they become obsessive after a while, almost mindless. It is as if he felt compelled to illustrate these scenes, but only well enough to get them out of his head and down on to paper. These paintings are evidence of Darger’s creation of a wholly alternate world replete with wars, humanoid cultures, geography,religion, and redemption. It is something like J.R.R. Tolkien’s Middle Earth, but more Freudian and pedophilic.

Was Darger insane, disturbed? Certainly he felt rejected by family and society. However much of a loner he was, Darger attended Mass nearly every day and was known to be outwardly friendly. For him, art seems to have been necessary for survival, both in the physical sense and in the psychological realm. Was this work like therapy for Darger? Perhaps it allowed him to play out his fantasies and have control over something he thought to be magical. His pictures appear to have sprung out of nowhere and yet can be followed in their obsessive rendering and design.

The history of modernism is one riddled with relationships with the “other.” Picasso or Dubuffet might have seen Darger as an intercessor, privy to outside spirits and forces. Darger was certainly and dramatically an outsider. How his work fits into the discussion on historical and contemporary art is probably not important. Certainly his use of borrowed and sampled imagery, his obsessive use of the narrative, and his overt illustration of the subconscious were ahead of his time within or without the art world. Ultimately though it is not Darger’s difference, but his and our common humanity which makes his work appealing to look at.

“Are Chased a long distance by Glandelian Soldiery and bloodhounds.” by Henry Darger Image courtesy of Carl Hammer Gallery, Chicago 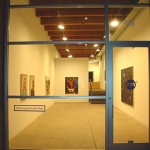