“ Was this the first video you ever made?,” Joe Cavalier, Professor of Sculpture, asked MFA Photography student John Opera. “This is the first good video I made,” Opera frankly replied as he and the five Crit Week panelists sitting in his studio let out a little laugh. Speaking candidly while keeping a sense of humor seemed to be the prevailing sensibility amongst the critiques I observed during Crit Week. As a graduate student in art history, attending a day of critiques proved to be a very valuable crash course in Art World 101. There were egos being pumped, egos being deflated, biting, screaming, laughing, whimpering, students being kicked to the curb, curators picking their noses, professors sighing—usual art world stuff. Actually, most of that is fiction. Instead I witnessed dedicated professors who know how to look at art and create a dialogue around what they view. I also observed that in order to prepare a student for the cut-throat art world, the panelists left their sugar-coated comments at the studio curtains and entered the graduate students’ spaces with an important objective—to be honest. 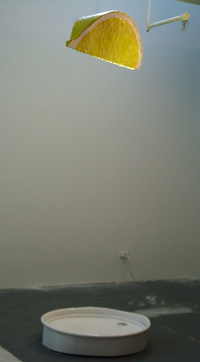 The panel I observed was headed by Adjunct Assistant Professor of Sculpture Mary Jane Jacobs and included Sculpture Professor Joe Cavalier, Printmedia Assistant Professor Peter Power, Sculpture Instructor David Standifer and MFA Art and Technology student Alexander Stewart. At the first critique of the day we viewed Opera’s psychologically-charged photographs of clay sculptures of his head. When Opera revealed to the panel that reading Freud this semester has influenced his work, Cavalier shared an appropriate quote by George Bernard Shaw: “If you have skeletons in your closet, the least you can do is let them dance.” At the very end of the critique, Opera let us peek at the sculptures he had made for the photographs. Standifer, who teaches a course in anatomy, recommended that Opera think about the musculature of the face.

Power praised the modesty and serious investigation apparent in Opera’s work. Equally apparent was the panelists’ sincere enjoyment probing deep into the artist’s work. After Opera’s critique, Cavalier admitted that he loves critiques. “I always feel privileged to get into students’ minds. It is a challenge.” I wondered if all critiques were this loving? 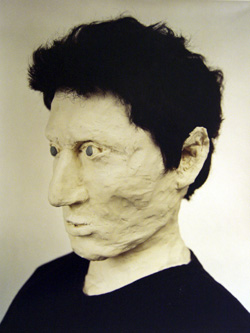 Fifteen minutes after viewing Opera’s photographs, the panelists and I found ourselves staring up at a sculpture of a giant lemon wedge hanging from the ceiling. Below the giant piece of fruit, a homemade-looking basin sat on the floor. My nose twitched. Was I smelling a lemon scent or did I just think I was? This is what MFA Sound student Tamara Albaitis had worked on this semester. Frustrated with sitting in front of a Mac each day in the Sound department, she explained her exploration into different medias. Albaitis aimed to awaken the senses and to reach beyond what meets the eye. (Yes, my nose was not lying. The citrus fruit sculpture was sprayed with lemon essence.) Understanding that creating this sculpture was a learning process for Albaitis, the panelists quickly realized that she has reached a critical juncture in her art-making at SAIC. Instead of immediately sharing their opinions, the panelists asked the student to describe what was working and what was not working about the piece. Standifer emphasized the importance of where a work lives. He suggested that Albaitis think long and hard about where to hang her piece. Perhaps the bathroom, the panelists joked. Later in the critique Jacobs built upon Standifer’s comment and devised a new way to hang the sculpture that would at once utilize the architecture of the studio as well as emphasize its form. Cavalier brought up the iconography surrounding the lemon and basin and suggested that she ask her work “dumb questions.” “Is the lemon a Democrat or Republican?”

The panelists proved that the most important part of critiques is to teach the students how to make decisions as artists. As Power stated, “Art is about nothing if it is not about making choices. We are judged by how well we can defend and define that.” The last critique of the day was the most challenging. The panelists faced a student that they felt needs to be exposed to art-making strategies right away. In the limited time frame, the five panelists did their best to probe into the student’s thought process. Jacobs asked which artists interested the student and then urged her to take an active involvement in what fascinates her. After commenting that at least they liked the gray walls in her studio, I knew I was not the only one relieved when the 45 minutes were up. As the panelists gathered their belongings, Cavalier smiled at the weary student and reiterated the greatest lesson that an artist learns, “Don’t lose the faith.”

Ain’t that the truth. 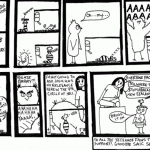