With many animation and stop-motion fans hyping up Henry Selick and Jordan Peele’s latest film, let’s take a look at how well the story holds up. 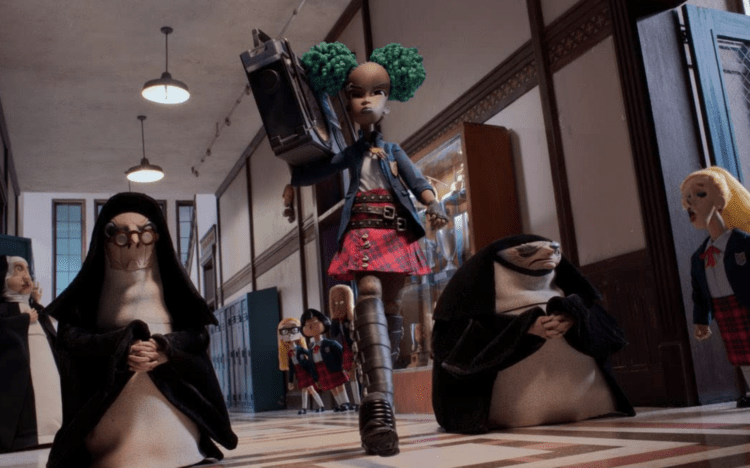 I recently watched “Wendell & Wild,” a stop-motion film directed by Henry Selick and co-written by Jordan Peele about a teenage girl named Kat Elliot who seeks to revive her deceased parents with the help of the demon brothers.

The movie starts off promisingly enough, with a young Kat and her parents at the brewery they own, which is the main source of income for the town of Rust Bank. Her parents successfully shut down an attempt by “Klax Corp” to build a private prison in the town, but are quickly killed in a car accident, leaving Kat an orphan. The film then fast forwards a few years and we learn Kat was sent to prison during this time, but is now being released to attend Rust Bank Catholic Girls where she discovers she is a Hell Maiden.

The plot is highly convoluted with each and every subplot being prioritized without much cohesion. Simply too much happens at once, and a poor job is done to keep the stories connected, much to the detriment of the characters. Kat, in spite of being the protagonist, frequently disappears from the story due to the focus repeatedly shifting to the other characters which causes  the film to compensate for her lack of screen time by rushing her development. This issue is not helped by the fact that the film never explains what a Hell Maiden is, leaving the audience to infer what they are and merely accept what happens without question. The titular demon brothers, Wendell and Wild, themselves do not fare much better, as the film tries to build sympathy for them early on with the brothers having been imprisoned by their father, but this does little to excuse them spending almost the rest of their screen time betraying people and getting high on magic hair cream.

I was further unimpressed by the subplot regarding the nun, Sister Helley, and the paraplegic janitor, Manberg. Like everything else, it was overly complicated and required far more exposition than what was given. All we learn is that Helley is a Hell Maiden Manberg exploited as a child to catch demons, and he hopes to do the same to Kat. The fact that Manberg is the sole disabled character shown, yet depicted as a creep with weak motives did not sit well with me. He remains unrepentant for the entire film only to be declared ‘Manberg the Merciful’ when his collection of demons is used to placate Wendell and Wild’s father, Belzer, and prevent the demon from destroying the town.

The film did have its bright points, however. It featured Raul, one of the few overt trans characters I have seen in a movie, let alone as a major character. While the term trans is never used a few hints are dropped, and Raul later shows Kat an old picture showing himself before he transitioned. The film is trying to be inclusive and does a good job of portraying a trans experience in a respectful manner. I also enjoyed the character, Siobhan, for being a refreshing deviation from a stereotypical mean girl, with her friction with Kat stemming from her inability to relate to her in spite of her wish to be a good person.

The film’s message should not be discounted, pointing out how corrupt private prisons are and how private prisons aim to fill their cells with as many people as possible, putting inmates in terrible conditions and ruining lives so people will just keep returning. This is a topic I rarely see brought up despite it being a rampant issue in the US, and it should be spoken about more often.

In terms of animation, the film embraced and made no attempt to hide that the characters were models rather than real flesh and blood, unlike many other stop-motion films. The designs showed exaggerated features and great variety, making the characters easily recognizable from each other and giving the film a unique style that draws heavily from modern art. But outside the lovely character design, the animation itself I occasionally found to be lacking, having parts in which the characters’ movement felt too smooth, though the special effects were largely well done.

Altogether, the film presents a promising story, beautiful designs, and a strong message, along with a good representation of the trans community, but it simply had too many things going on to deliver. With some streamlining “Wendell & Wild” could have been something spectacular, but instead the movie is only alright.

Entertainment The Highs and Lows of ‘Wendell & Wild’
« Previous Story