“Turning Red”: A Turning Point for Children’s Films, But Not For Animation

Disney’s latest animated outing is a refreshing change for children’s films, but fails to push the envelope with its animation. 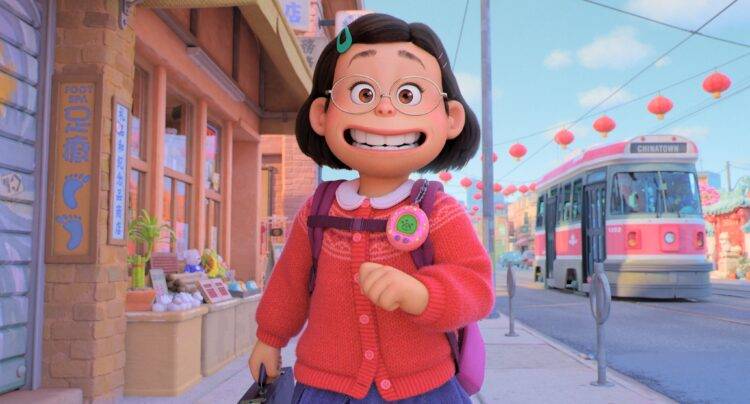 “Turning Red” is a film about Meilin “Mei” Lee, a young girl living in Toronto in 2002, whose family runs a shrine where they worship their ancestors. Mei strongly believes she is independent from her overbearing mother, Ming, though to Mei’s friends it’s blatantly obvious Ming is in charge of her life. One day, Mei wakes up to discover she can become a gigantic red panda, starting her down a path to become her own person, separate from her mother’s wishes.

I enjoyed the fact that Mei is not a watered-down Disney princess whose flaws are only apparent to others in the film. Instead, she’s a weird girl — she draws pictures of herself with the crush she’s never spoken to and is convinced that going to see a boy band is the first step towards womanhood. Her awkwardness is genuine and she makes bad decisions, with bravery being a trait she slowly comes into. She’s relatable in that she really is imperfect, and many of her struggles are wholly mundane.

The relationships in the film are important. Mei is not friendless or parentless like many other Disney or Pixar protagonists. The central conflict stems from Mei’s struggle to achieve independence from her mother, who is severely overprotective and has immensely high hopes for her. It’s made clear that Ming really does love her daughter, and only wants to keep her safe, but in doing this, discourages Mei from being herself. It’s sad and painful to see that Mei wants to make her mother proud, but can only be honest with her friends. This initially serves to drive them away, but when they finally make amends, the movie hits an uplifting note.

As for aspects I didn’t care for, I felt that things became overly complicated towards the second half of the film, especially when Mei’s aunts and grandmother were introduced. While having Ming’s relationship with her own mother parallel Mei and Ming’s connection seemed like a good choice, I don’t believe it was fleshed out enough. They didn’t have enough screen time together, so the resolution felt rushed and sudden without enough buildup. The aunts did very little besides adding extra bodies to the scenes, coming across as unnecessary and taking up time that could have been put to better use. It was especially aggravating since we learn very little about Mei’s friends despite their importance to the plot, with Priya and Abby being more or less ‘the quiet one’ and ‘the loud one’.

In terms of animation, I enjoyed their use of color palettes, showing pastel colors in the beginning and darker green and red tones near the end. It also took inspiration from anime, getting creative with facial expressions through giving characters ‘cat smiles’ and huge, glittery eyes when faced with something cute. Everything had a far more cartoonish aesthetic in comparison to older Pixar films like “Soul,” which used highly realistic visuals. Also, as someone who’s lived in Toronto most of their life, I found it fun to see the retro Canadian Easter eggs they included, though the city is drawn considerably nicer than in reality.

However, I sometimes found the animation didn’t quite push things as much as I would have liked. Elderly characters received only small indents for wrinkles, and the faces looked extremely smooth, lacking much definition. There is also the matter of Ming’s red panda form at the end — it wasn’t a particularly effective kaiju, looking far too comical to really make me feel the gravity of her attacking the Sky Dome. Her fur somewhat resembled wires during close-ups, which was a little irritating at times, and took me out of the experience a bit. “Luca” pushed things with its underwater animation and “Soul” with its hyper-realistic aesthetic, but “Turning Red” didn’t extend its boundaries as much as its predecessors.

Something interesting in the film was its very blunt approach to the concept of menstruation. When Mei has her first transformation, Ming mistakes her panicking as a response to her period and immediately pulls out an array of pads and painkillers. While the word “period” is never stated, it’s still rather shocking to see it being made so visible in a media landscape where “women’s issues” have often been dismissed as utterly taboo, let alone in a children’s film. Furthermore, when Mei and her friends finally make it to the 4*Town concert and are squealing at the top of their lungs as they watch the singers fly around on angel wings, they see Tyler, a boy who antagonized them throughout the movie, squealing just like them. Rather than mock him for his unmanly interests, the girls are fully supportive and enjoy the show with him.

Oftentimes, the reveal of a man enjoying stereotypically feminine things is used as a way of degrading them, though here Tyler’s excitement and joy at seeing a boy band is treated just legitimately as the girls’, and no one bats an eye when he proclaims his love for the singers. The media has made strides in showing female characters with traditionally masculine interests, yet frequently fails to showcase men with traditionally feminine interests, making this a great change. These are exceptionally rare occurrences in mainstream children’s media showcasing more openness than I’ve seen previously and I hope are a sign of a more inclusive future.

Overall, I thought the movie was good, but it wasn’t amazing. I felt aspects of it were definitely interesting and that they really had something going, but it wasn’t always executed as well as I thought it could. The animation with its anime inspiration and color palettes was fun, but didn’t feel like enough. It pushed some boundaries but held too far back on others. The relationship between Ming and Mei was well done and it was the heart and soul of the film, yet those between other characters felt underdeveloped. “Turning Red” was by no means a bad movie, and it certainly made excellent points, though it still seemed like it hadn’t gone as far as it had the potential to go.

Entertainment “Turning Red”: A Turning Point for Children’s Films, But Not For Animation
« Previous Story

Teen Idles, the Teenage Dream, and the Impatience of...