“I’m getting no credit for it”: Cultural Appropriation on TikTok

On TikTok, Black culture is absorbed into youth culture — without credit where credit is due. 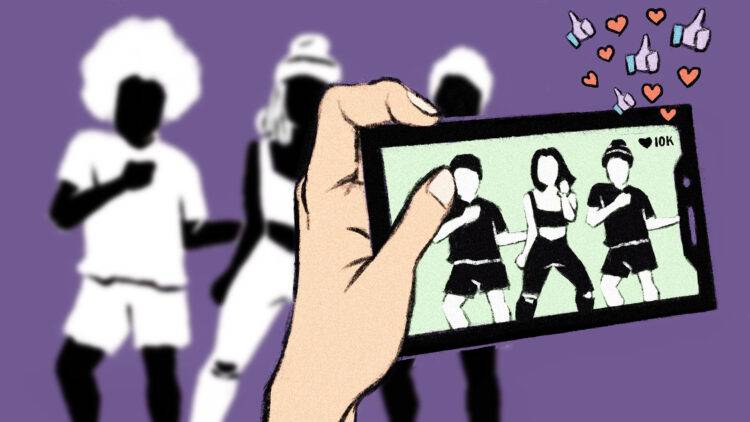 On June 18, 2021 Erick Louis posted a video that would kick off the ongoing #blacktiktokstrike. The video shows Louis nodding his head, swaying for the camera, appearing to warm up for his dance to Megan Thee Stallion’s “Thot Shit,” which was released earlier that week and was all but waiting for its TikTok takeoff. He bounces once, twice, then flips the camera off and walks away. “Sike. This app would be nothing without blk people,” the screen reads.

TikTok, a social media platform for sharing short-form videos, was the most downloaded app of 2020. Its users skew young and diverse, a consumer demographic that has gotten the attention of some major marketing dollars. But while the creative side of TikTok is driven by Black culture, the financial and social capital is dispersed primarily to white influencers who adopt that Black culture.

As Michele Byrd-McPhee, the founder and executive director of the Ladies of Hip-Hop Festival explains in an Atlantic article, “If you look at some of the dances on TikTok — the Mop, the Nae Nae, the Hit Dem Folks, the Woah — they were dances that young Black folks have done in parking lots, at cookouts, at home. Then they fall into the TikTok hemisphere and become something else.”

That “something else” is the space where Gen Zers form their identities. It’s the internet. And the internet is not going to just peel itself away from Black youth culture, it basically is Black youth culture. A recent SNL skit, “Gen Z Hospital,” received criticism for using AAVE words (think: “deadass,” “fleek,” and “no cap”) in the script to represent youth culture. The SNL writers’ naivety shows just how convoluted the internet has made it to sift Black culture from Gen Z identity. In order for TikTok to be sustainable it needs to include a better path for Black creators to cash in on their creations.

Charli D’Amelio, TikTok’s most popular influencer, became famous because of a feedback loop that ensued when she posted a video of herself dancing to K Camp’s “Lottery (Renegade).” She didn’t make the dance up — Jalaiah Harmon, a 14-year-old Black girl in Fayetteville did — but as one does on TikTok, D’Amelio copied the dance and posted it to her account. The algorithm did the rest. While Jalaiah’s post got almost 4,000 likes, Charli’s rendition hit 1.4 million views in just two months.

Pointing at the algorithm and shrugging shoulders doesn’t excuse the disparity between D’Amelio’s 120 million followers and Jalaiah Harmon’s 2.9 million followers. It only helps to explain it. Despite its cleverly designed appearance of randomness, the algorithm that guides everyday TikTokers to internet stardom is anything but spontaneous.

“This is gonna sound crazy you guys, but I originally started the half and half because I am a darker individual,” says Kaelyn Kastle, a Bermudian influencer in the New York Times documentary “Who Gets to be An Influencer?” “I’m a Black woman on TikTok and the algorithm likes bright things.” The “half and half” she is referring to is the color of her hair. Half of it is black, natural. The other half is dyed neon pink. She admits that she wishes she could dye it back to black, but is worried about “how [her] numbers are going to react to it.” It’s a small compromise for what she deems “the new American Dream.”

The aspirational aspect of TikTok — that money and fame are just one well-timed lip-bite away — are part of its design. As Alex Zhu, former chief executive of TikTok, put it on Bloomberg’s Foundering podcast, “Having an American Dream is good, but if it’s only a dream, people will wake up. You have to give the opportunity to average people… make sure there is a middle class coming up.” D’Amelio isn’t wrong for taking her cut. Given the chance, anyone in the world of social media influencing would (and is trying to) do the same. What is wrong is that not everyone has an equal chance.

When O’neil, a dance creator, talks to The New York Times about the first dance of his that went viral, he swings wildly through excitement and despair. O’neil choreographed a short, repeatable dance (called “dance challenges” on the app) to the DaBaby song “Vibez.” A few days later he started getting texts that his challenge was making its rounds on TikTok. Charli D’Amelio did his dance. Addison Rae, TikTok’s highest earner, did his dance. “This was big, like, damn, all of these folks hit my challenge on TikTok? I’m like ‘whaaat’?” O’neil says. He started commenting on the videos, things like “My dc love the fits though lol,” with a fire emoji and the all-too-fitting crying-laughing emoji. Lighthearted, but lightly pleading. His face drops as he remembers commenting on the videos, “…Ain’t nobody notice me,” he says. “And I seen everybody just doing my challenge, and I’m getting no credit for it. I definitely feel like I have the talent to go really big, you know? I know I could have been further if I got that credit. Could’ve had so many opportunities after that.”

O’neil is right when he says that he could have been further by now. These influencers are not exaggerating when they say that the right video can change your life. D’Amelio — whose fame is because of a dance by Jalaiah Harmon — moved her family to the Hollywood Hills. Her older sister, Dixie D’Amelio, is now the third-highest earner on TikTok (behind Charli and Addison Rae). Her father Marc started D’Amelio Family Enterprises last year.

It’s notoriously difficult to find the origin story of anything on TikTok. As Luis Loya, Ph.D candidate in Journalism and Mass Communications and TikTok scholar, told F, “TikTok is unique in that videos tend to find the user, more than the user finding videos.”

To create a paper trail users can put “dc” — meaning dance credit — in their caption to acknowledge the original creator. This practice is becoming more and more common, and with each round of creator agitation the “dc” caption grows in popularity. But it shouldn’t take persistent agitation, like the #blacktiktokstrike, for Black creators to get back what has always belonged to them.

The people behind TikTok alchemized an appallingly simple premise with all the glamour of the American Dream and all the illusion of a Ponzi scheme. Anyone with a phone can post a video of themselves and gain a following, but the same, predictable, few will see any material gain. The result is a delusion of democracy that only reinforces a problematic status quo. It’s another story about Black joy and the way it’s fastened to white bodies and sold for more than its original valuation. The premise hasn’t changed, the platform has. TikTok is young, fresh, and in so many ways, the same as it ever was.

Entertainment “I’m getting no credit for it”: Cultural Appropriation on TikTok
« Previous Story