“Constellations”: The Sound of Stars and Gathering 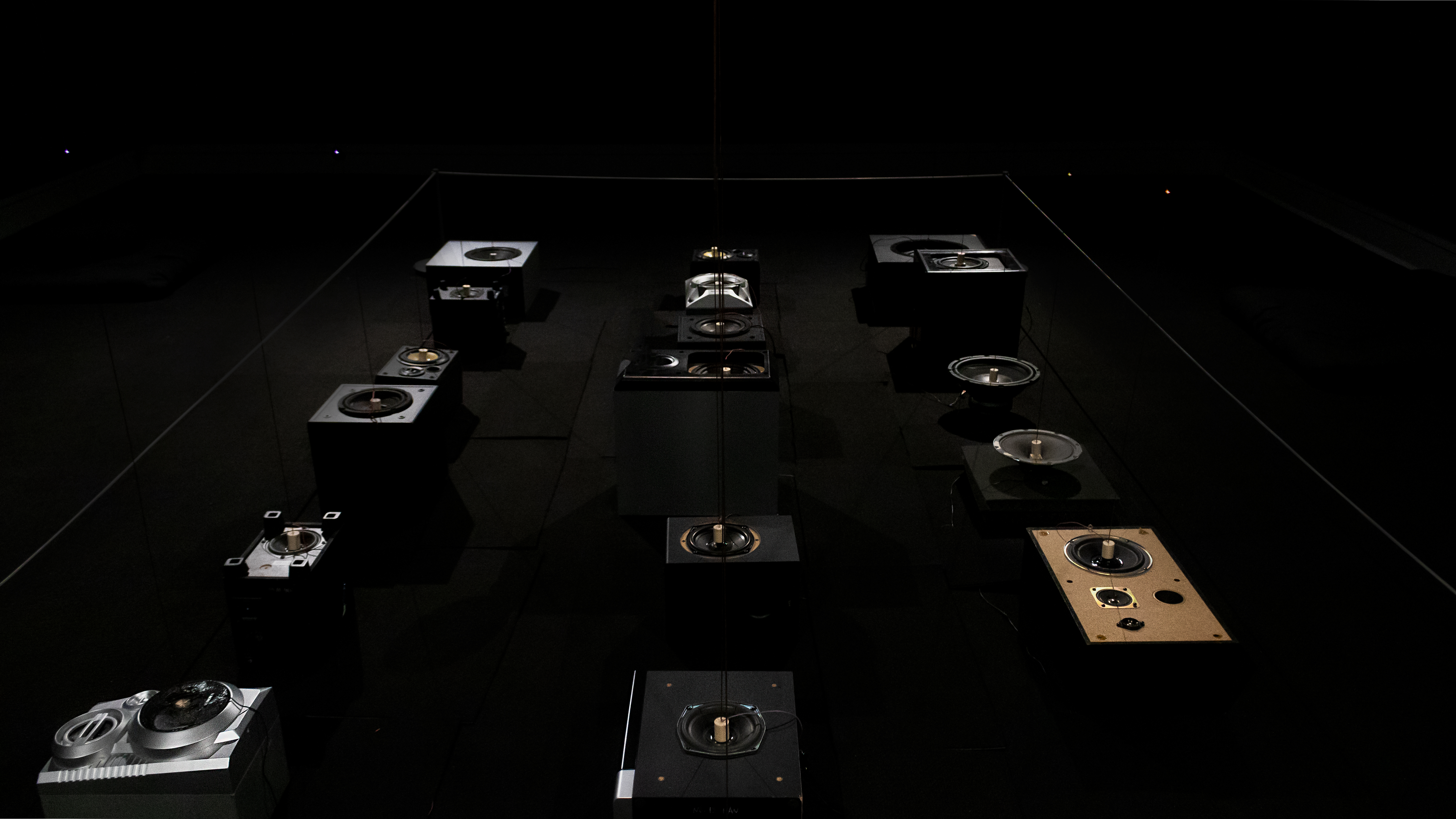 The SITE Galleries has an unusual set-up in the 280 Building right now. The gallery doors are closed and covered with dark paper. At glance it appears that the gallery is under installation. However, walking closer to the doors, the Galleries Assistant’s station is still present. Unlike in the past, the station is located outside, rather than inside the exhibition space. An eye-catching introductory wall text indicates the show on view: “Constellations.”

The audiovisual exhibition “Constellations” is a solo exhibition by multimedia artist Chris Han (MFA 2020). Han received his undergraduate degree from the Department of Sculpture at Seoul National University. Han discovered his interest in sounds while exploring the potential of moving sculpture, which led to his decision to focus on sound art during his time at SAIC.

Entering the space, before any visual experiences appear, the viewer will catch the loud sounds of multiple objects falling. At a closer glance, the viewer will see various kinds of speakers arranged on the floor, connecting with metal rods installed from above, concealed in a dark room. 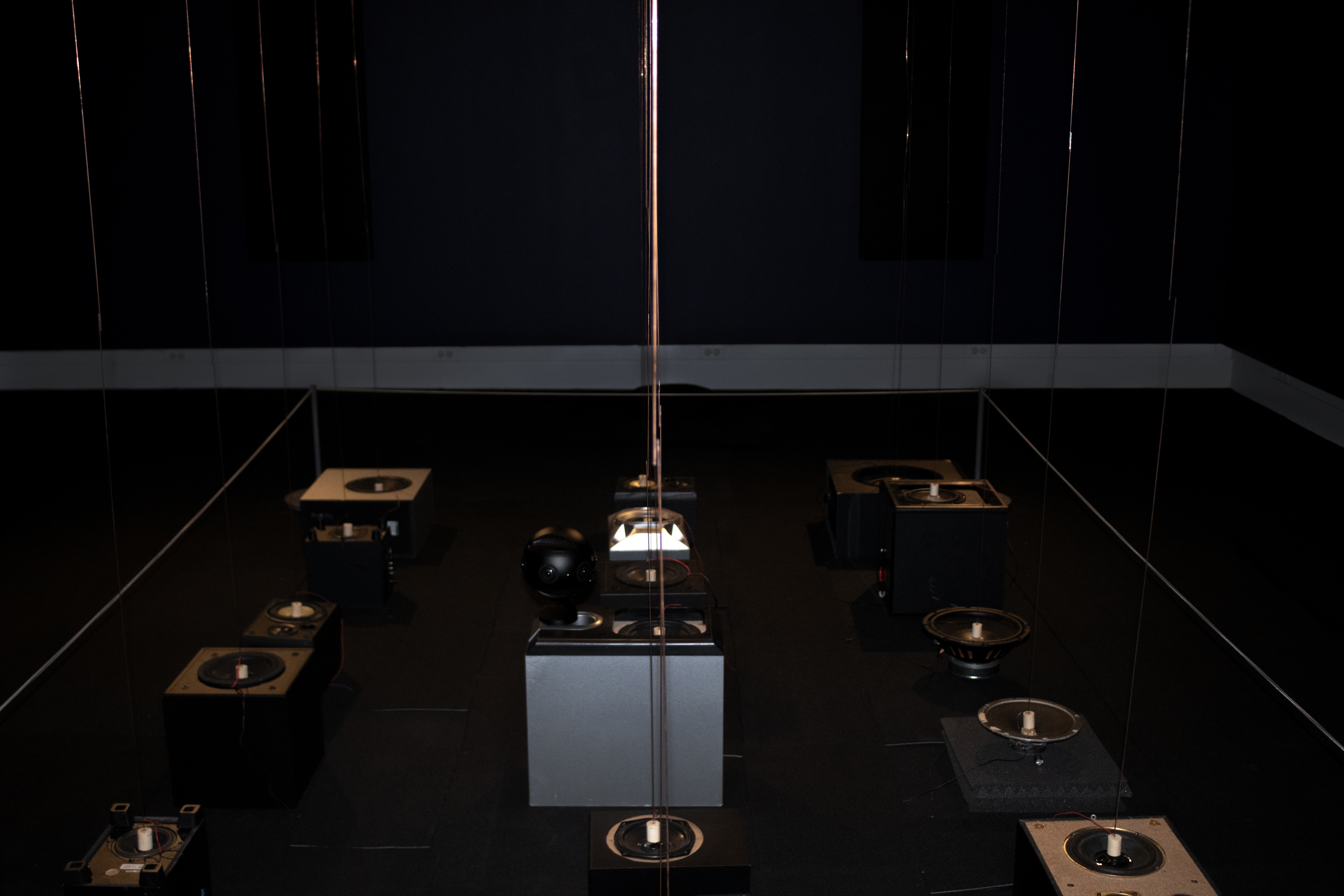 The title “Constellations” reflects an artificial natural environment that resembles the night sky. In an interview, Han expressed the layers of meaning of the exhibition title. In addition to the literal presentation of the stars, Han wanted “to use the speakers that I gathered from local thrift shops in Chicago,” and group them together to show the message of gathering groups together while still retaining their voices. The speakers found in the thrift shops were owned by different individuals, some were broken and peeled off. Han sees special characters and potential in the speakers.

During his interview, Han provided a comprehensive elaboration about the approach and technical aspects of his exhibition. He explained that he begins his process by experimenting with objects that he is interested in — in this case, speakers from thrift stores. Speakers are commonly used as an in-between medium in sound art. When playing an audio file, the speakers vibrate air molecules so the viewers can hear sound. However, in Han’s system, the speakers are used as they are; they no longer rely on the audio field but create their own sound.

Han also dives deep into the feedback system used for his exhibition, explaining that the speakers are not playing any audio files from a media player.  The feedback system Han uses is different from the typical audio and video feedback system. While a typical system creates feedback from the audio playing, Han’s physical feedback system has a negative movement that relies on the pull of gravity to create a loop that makes the sound with the device itself.

“The basic system is very simple,” Han explains. The speakers have a “physical feedback system, which is one of the wires attached to the diagram and hung from the ceiling.” He explained that what the viewer is hearing is the sound of the speaker itself, when the connected power moves up and down on the wire. Therefore, every speaker creates a different and unique sound from this system. This particular technique was developed from Han’s experience working with Nicolas Collins, chair of the Sound Department at SAIC. Collins showed Han the basics of how speakers work, from which Han developed his idea and technique. 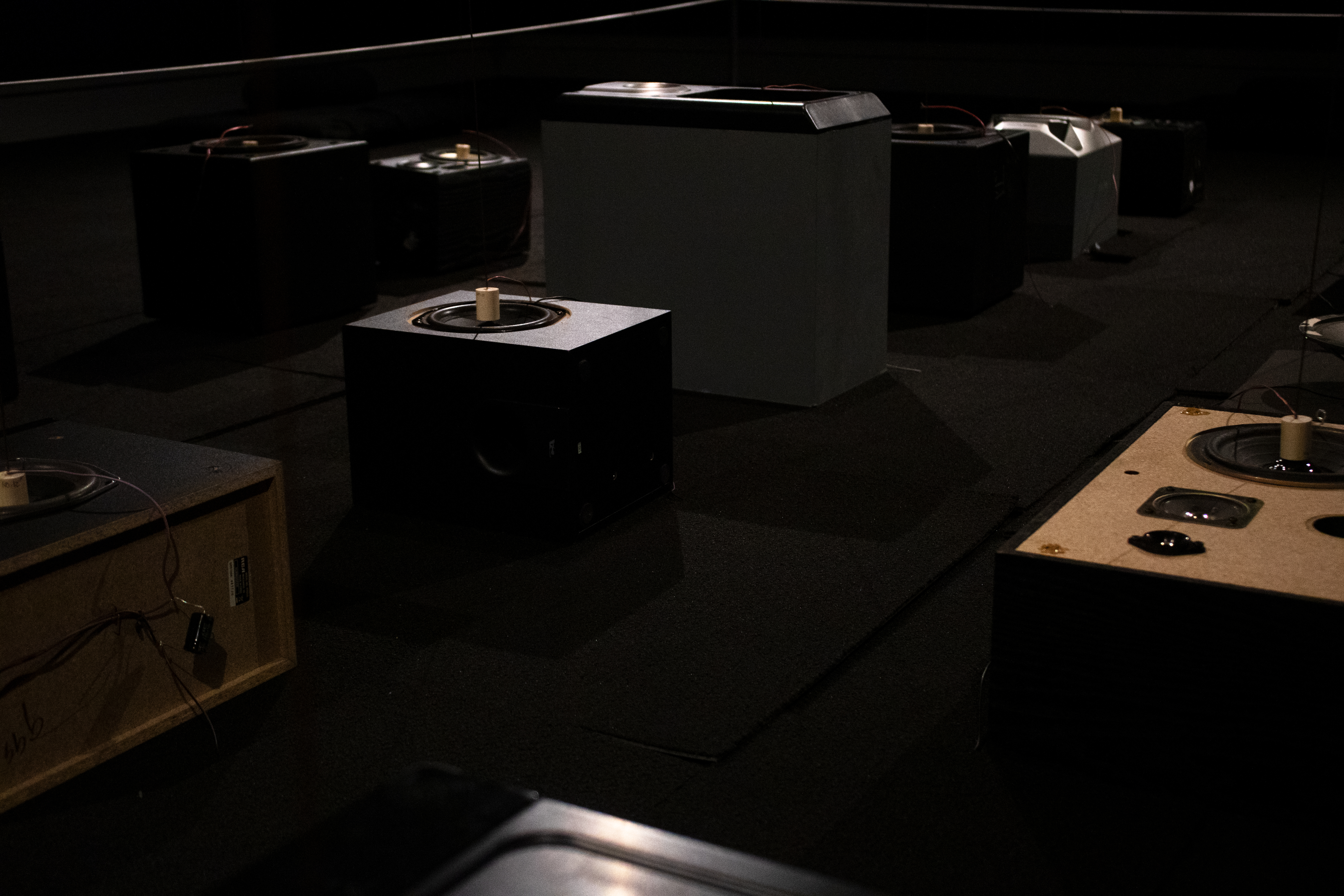 Han took the acoustics of the room into consideration during installation, due to sound quality and frequencies shifting in different surroundings. To combat this, Han included acoustic panels and sound-absorbent carpets so that viewers can hear the sound of the speakers directly instead of reverberated sound from the walls, ceiling and floors, or, as Han puts it, to “see where the sound source is located, and hear directly from the objects.” Han also took the visual experience of the installation into account. Han chose the 280 location in order to keep the room as dark as possible, to facilitate the illusion of stars sparkling in the night sky.

The wall text of the exhibition gave the impression that “Constellations” is meant to explore identity and environments interacting with their surroundings. When asked if the work had any reflection in politics, Han expressed that he was “not emphasizing politics in my work, but if it is the viewer’s experiences, I think everything is good.” Han added that he wants his work to give the viewer the feeling he has when experimenting with the objects, but always to go beyond intention. Han emphasizes opening dialogue that allows viewers to interpret the show with their own perspectives.

The exhibition was originally scheduled in the Spring. However, the show had to be postponed due to COVID-19 and the Illinois shutdown. Han, who graduated in May, traveled back from South Korea to Chicago for the installation of the show. He was in quarantine during most of the installation period, which only left him with two days to physically be in the exhibition space. This was challenging for both Han, the artist, and the installation team at SITE Galleries.

Considering all the existing barriers, “the installation went really well because the artist already knew what he’s doing,” Kang said. Han had exhibited this installation before, and was able to provide specific instruction for gallery attendants.

According to Kang, two out of five exhibitions in the fall are focusing on sound and new media. Following Han’s exhibition SITE Galleries will exhibit MFA candidate Corey Douglas Smith’s musical work, “The Light Comes In The Name Of Voice” from Oct. 19 to Nov. 3. Han’s exhibition reflects the technical and scientific knowledge of sound art that Han has, and shows his effective utilization of space so that his installed objects interact with it.

“Constellations” will be on view at the SITE Galleries at the 280 Building until Oct. 7.

SAIC “Constellations”: The Sound of Stars and Gathering
« Previous Story

The V is for Virtual: What to Expect from...