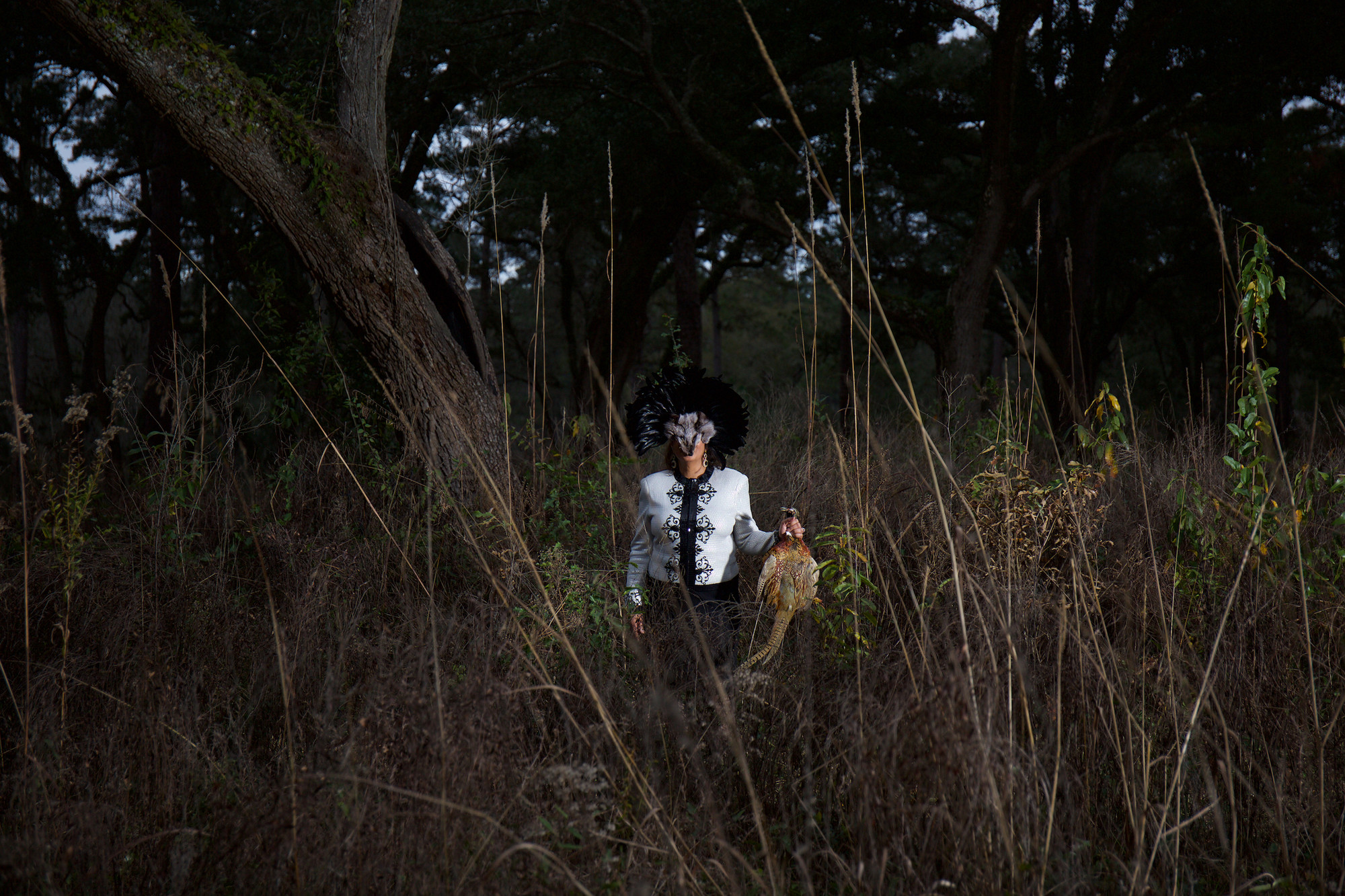 Two stuffed alligators on the floor bend themselves in perfect circles to eat their own tails, ouroboros-like. In the video “FLORIDALAND,” playing in a different part of the gallery, the artist, Allison Janae Hamilton, rides a horse in a flowing tank top and a bird skull mask. On an adjacent screen, her mother, in a gothic blouse and feathered mask, walks through an open field carrying a slaughtered pheasant.

Allison Janae Hamilton’s work is driven by fantasy and relationships to the land. It captures the viewer in a world that feels familiar yet unplaceable. Her art spans across mediums, from photography, performance, and sound to video and fashion. Her solo exhibit, “Pitch,” was on view at MASS MoCA from March 2018 – 2019. She resides in New York City, but her roots are pastoral.

Born in Kentucky, Hamilton and her family eventually moved to Florida — first to Miami, then to rural Tallahassee. This location significantly influences her work, which draws on both the ecology and the culture of northern Florida. Her upbringing kept her knitted to the land, nurturing her respect and appreciation for nature. Her family has hunted for generations, which gives them a distinct relationship to sustainability and food that others might take for granted. Hamilton inherited her name from her great-grandmother, a skilled markswoman whose skills have been passed down to her granddaughter.

Nature, for Hamilton, is a bridge between the past, the present, and the future. The land, an active protagonist in her art, is the best storyteller. Through it, history becomes tangible. In an installation at MASS MoCa, pine trunks (which were ethically sourced) dangled from the ceiling, their odor wafting through the space. Plywood pieces, painted with a thin, chalky coat of paint, lean against the wall. On one, the word “mother” repeats over and over. 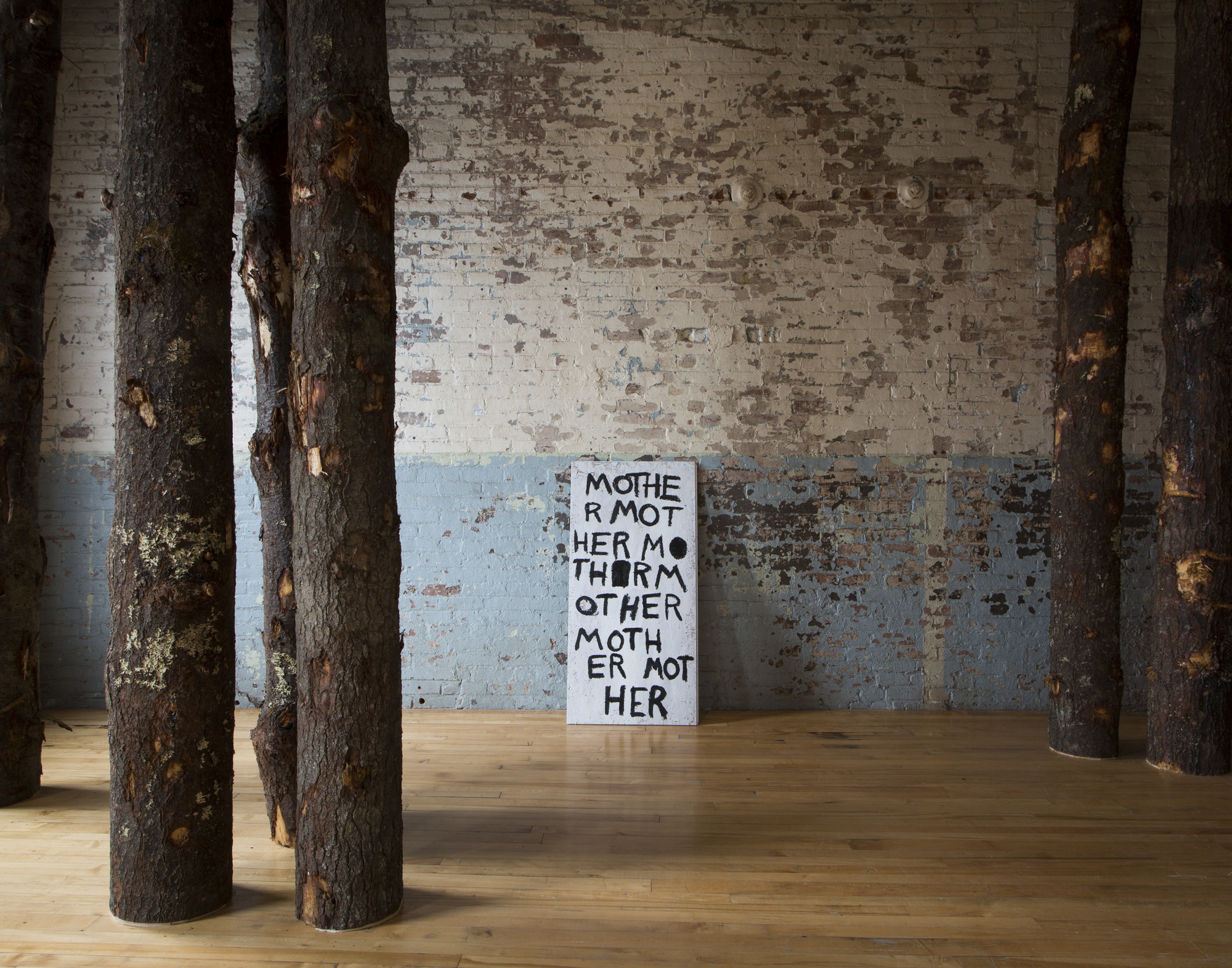 Through this installation, Hamilton investigates Florida’s once-booming turpentine industry, which devastated both the land and its inhabitants. Once the second largest leading industry for Florida, resin, also called “pitch,” was harvested from pines in order to create turpentine. Turpentine was once used for ships, musical instruments, and soap. Turpentine today is most familiar as a paint thinner for oil painting. Large turpentine companies would exploit isolated workers in rural camps, where they had no choice but to rely on scrip and company stores. About 10% of these workers were convicts performing forced labor. As part of her research, Hamilton began to explore these abandoned camps. By examining this history, her exhibit dissects the commodification of people and the environment.

Especially now, as climate change is accelerating and people of color are more likely to be on the front lines of the climate crisis, Hamilton’s work feels even more important. The 2014 National Climate Assessment found that rural Americans will face additional challenges linked to climate change, from isolation to aging populations. Rural life is changing irrevocably as the growing season shifts, with winter becoming shorter and summer longer. Just as the environment serves as the main character in Hamilton’s work, nature is the protagonist for those who live in the thick of it. 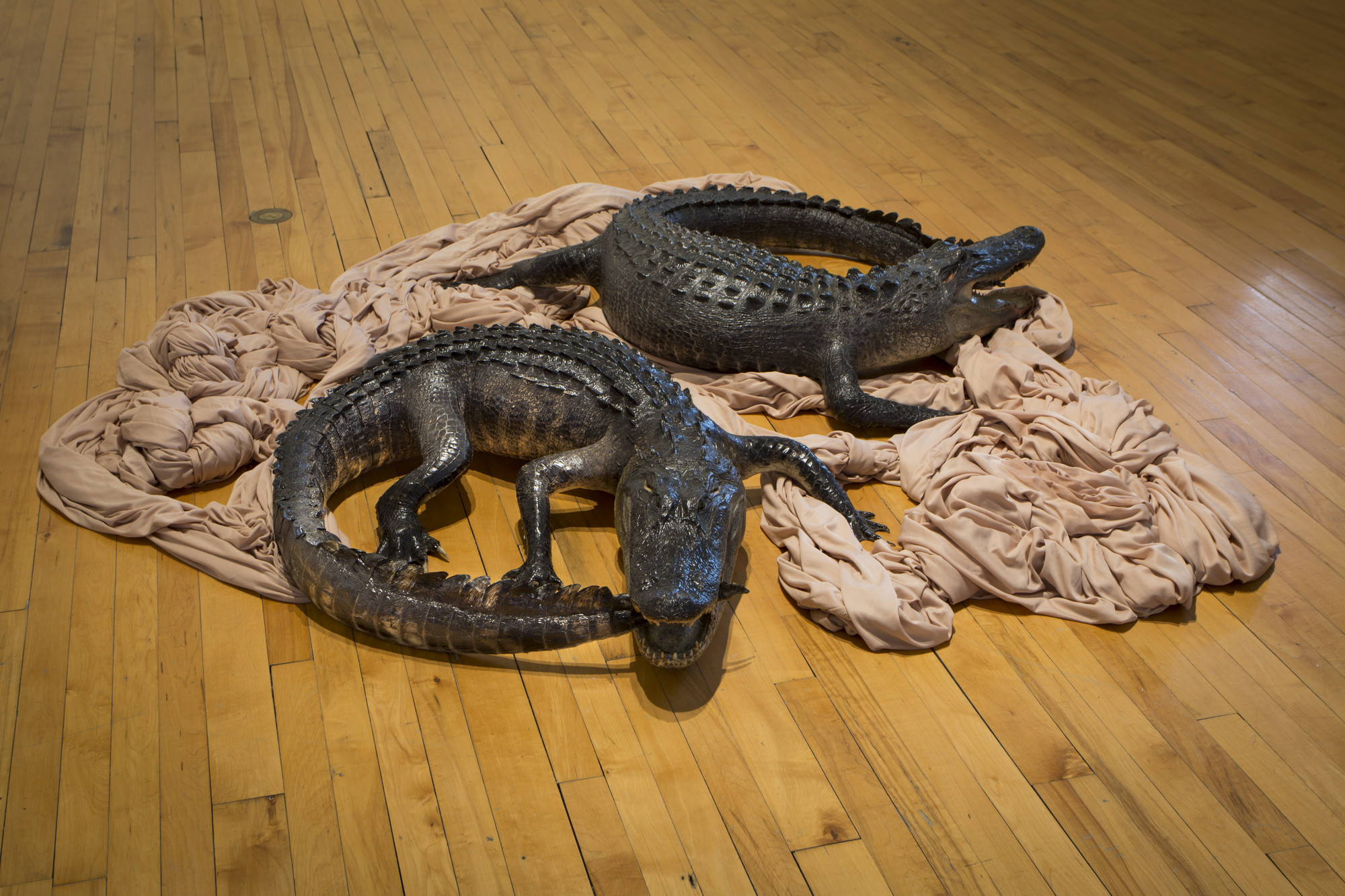 As Hamilton told The New York Times, her grandmother could “tell you everything about climate change.” Centering the voices of people of color is particularly important because rural Americans are so often depicted as white and conservative. In an interview with Creative Independent, Hamilton said, “Post-migration, there are still tons and tons of African-American folks living in the South, in the rural parts of the South, too. But the way these kind of discourses are organized and structured really leaves a lot of people out, I think. There are still so many stories, so many kinds of experiences, that people still don’t know anything about. I feel both obligated and honored to try and tell them.”

Hurricanes have also played into Hamilton’s work. Some of her work deals with the Great Miami Hurricane of 1926 and the Okeechobee Hurricane of 1928. These hurricanes killed thousands of black migrant workers, who were buried unceremoniously in unmarked graves. Drawing on the lyrics of Judge Jackson’s 1928 hymn “Florida Song,” which deals with the Great Miami Hurricane, Hamilton created “The peo-ple cried mer-cy in the storm.” The installation at MASS MoCA consists of an enormous tower of white tambourines nestled by a picturesque pond. In “Epos: Soundscape of a Thousand,” a sound performance, a group of musicians sang around the sculpture in honor of those who lost their lives in the Okeechobee Hurricane. As Hamilton told The New York Times, “My concern is which communities are more vulnerable, which ones are given the least care, which ones are always on the wrong side of the levee; and how that relates to the history of power, and of the country.”