Four shows to see around Chicago in July. 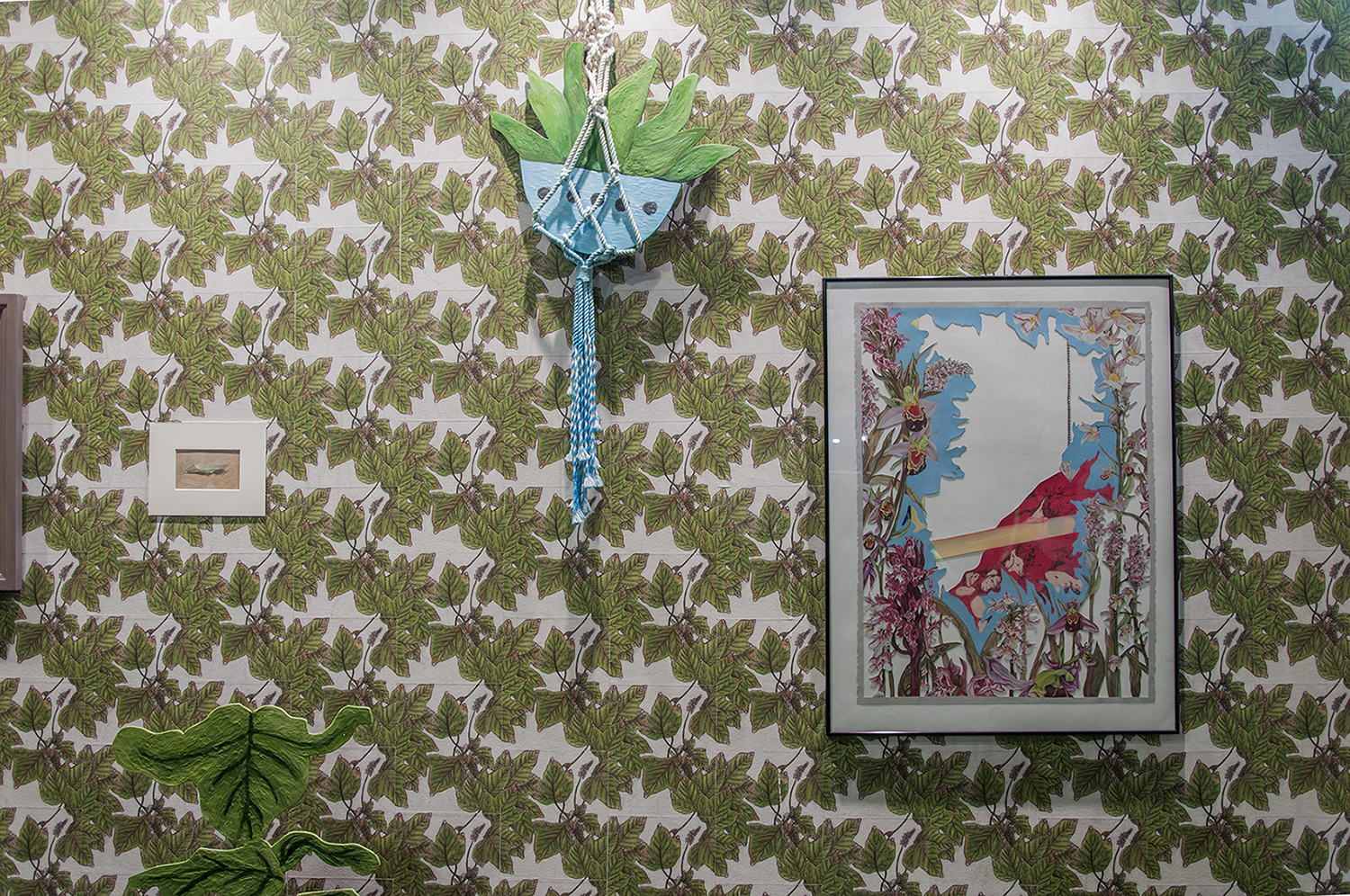 For this plant-themed show, Ground Level Platform has been transformed into a walk-in garden blanketed with grass and greenery in various levels of real. Drawings and sculptures that take plants as a starting point are sprinkled throughout the artificial jungle. A Willy Wonka-like plant by Victoria Fuller sprouts giant peanuts the size of shoes arranged around the base of its stalk; fake flowers covering hidden speakers, by Fran E. Gallagher, tremble from the floor. Ground Level Platform, a newish addition to the Pilsen gallery scene, was founded by SAIC alumni Seomy Ahn (MFA Sculpture 2019) and Samuel Ezra Fisch (BFA 2015). The gallery focuses on experiential art and frequently incorporates food into its events. On a recent night, they presented a table covered with edible sprouts in “dirt,” ranging from sweet (cacao base) to savory (mushroom and nut base). Hidden in the blades were “buzz buttons,” the edible flowers of the Sichuan pepper plant, which look like dandelion blossoms and taste like Ryan Trecartin in vegetal form.

None of the works in this small but mighty exhibition make any explicit reference to mainland China’s encroaching threat to democracy and human rights in Hong Kong. But the darkly surreal video games by five contemporary Hong Kong artists share a pervasive feeling of isolation and powerlessness. In one, you are prompted to answer a series of mundane questions truthfully when told to lie, and to answer falsely when instructed to tell the truth. In another game, you pass through a series of doorways in an apartment building, but none of them ever leads inside or out. In the most haunting, an animated Joseph Beuys tries to preach to a crowd of Grand Theft Auto hecklers. They beat him up with meaty, video game sound effect punches: a dark comment on the current usefulness of socially engaged art.

3. The People Shall Govern! Medu Art Ensemble and the Anti-Apartheid Poster

In the 1970s, the Medu Art Ensemble, a collective of fifty South African and international artists and activists, started producing posters in exile to fight a visual war against apartheid. Smuggled across the border and posted illegally — censorship increased in the 80’s, and it was illegal to quote banned anti-apartheid activists — many were destroyed on sight. The posters and publications were produced with the then-democratized mediums of screenprinting and offset lithography, and employ symbols shared by other movements for social justice, like upraised fists. This show, the first-ever in North America to focus on Medu, also includes posters from social movements in neighboring countries. It’s a true inspiration to artist-activists today – even if we may be better equipped to fight white nationalism with memes than prints.

The glitter-covered canvases of Haitian-American artist Sereno Wilson are centered on Vodou figures but also incorporate a wide array of symbols and references, from the Chicago Bulls to Freemasonry. In one, the skeletal face of Baron Samedi, the spirit or loa of death, resurrection, and debauchery grimaces under his purple top hat; in another, an enormous red heart with a sword laid across it covers the face of Gran Bwa, protector of the forests. Wilson’s exclusive use of glitter makes each canvas is half icon, half disco ball. This show is a collaboration between the Haitian American Museum of Chicago and Project Onward, an organization that works with makers with developmental disabilities, where Wilson is an artist.