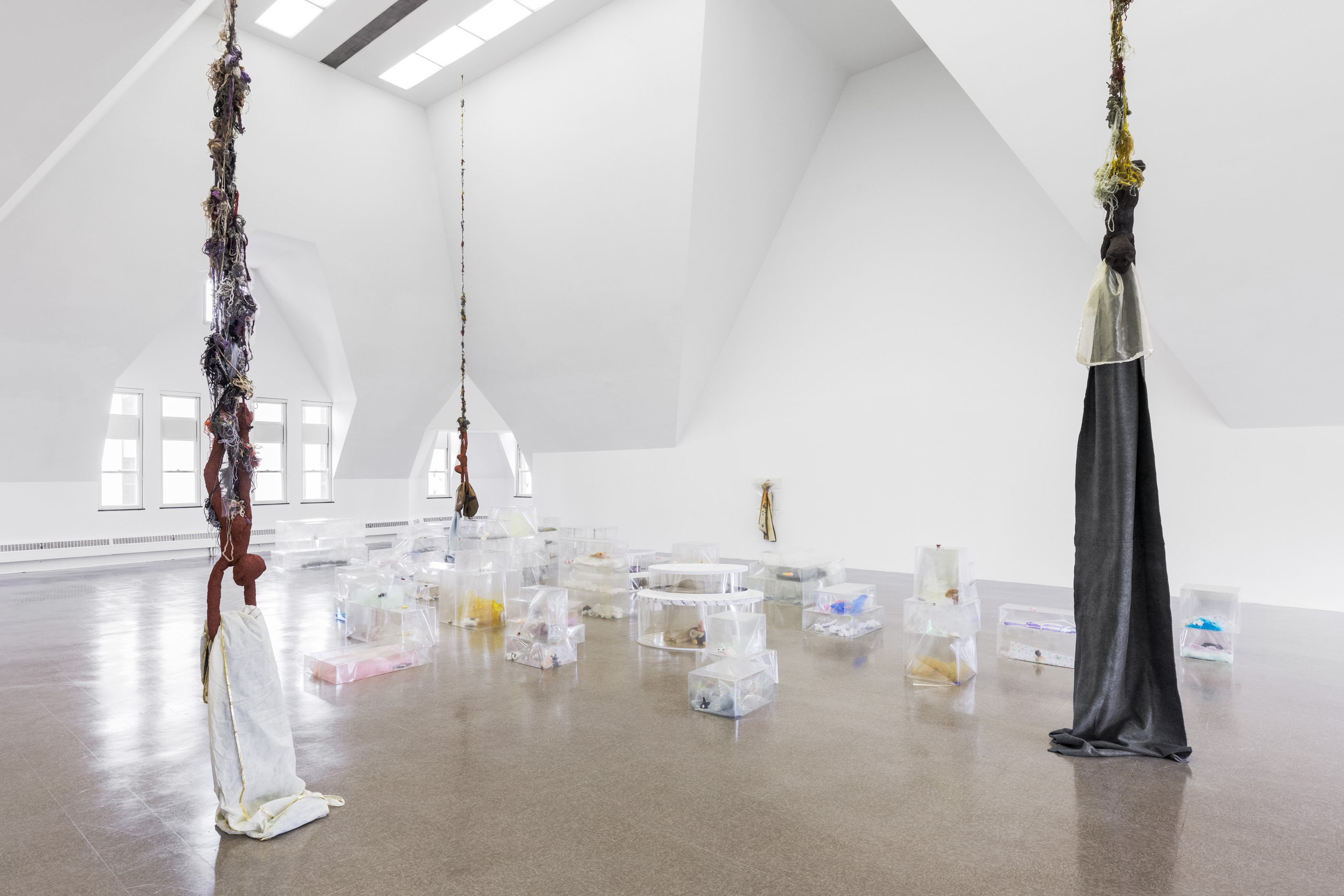 “BLOWOUT,” Liz Magor’s show at The Renaissance Society, on view through June 23, tells an atmospheric story of objects and the hands that hold them. It combines the handmade replicas and found objects typical of the artist’s practice in a quiet insistence on the presence of latent histories within even the most mundane items.

To the left of the entrance to “BLOWOUT” are “Valet (violet)” and “Valet (pink),” two sculptures resting on makeshift plinths made of IKEA tables and bookcases still in their original packaging. A friend in attendance remarked that the IKEA plinths were like a readymade the artist didn’t finish making. The objects on top of the plinths, on the other hand, are painstaking replicas of handbags, cast in polymerized gypsum (a type of plaster), each oozing with brightly colored silicone rubber. The two IKEA box sculptures showcase Magor’s investment in the beauty of objects that would otherwise go unacknowledged, registering their small moments of wonder in a process of casting — encompassing both the definition of casting as mold-making and as in casting a role — and re-displaying. By encompassing the two extremes of “casting” in this work, the artist makes clear from the beginning of the show that the hand that replicates and the hand that points move in unison across the exhibition space. 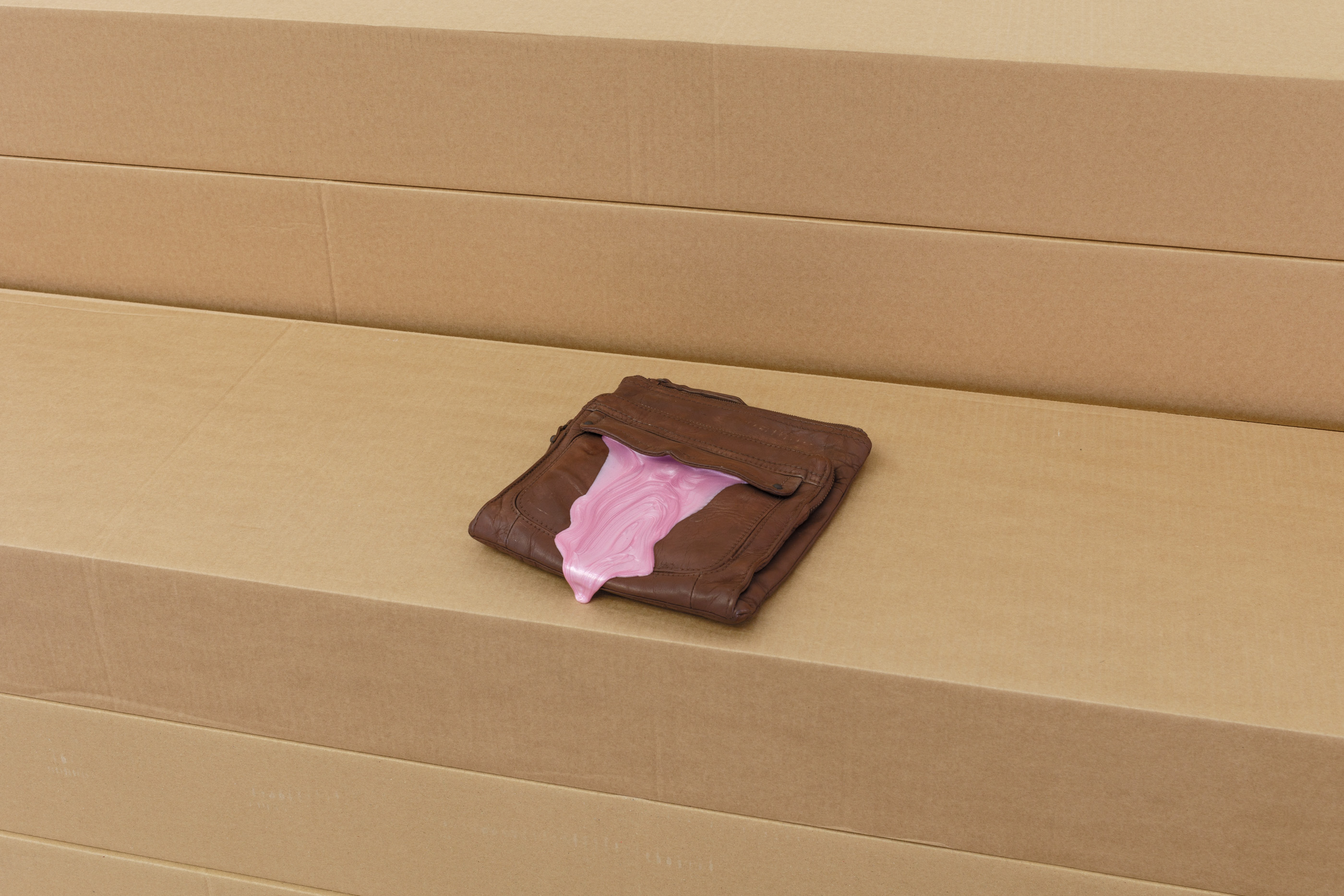 In an interview with Art21, Magor said of her low-tech tools, “I’m not investing in equipment; I’m not a factory.” Indeed, fancier equipment would force a gap between the work and the artist’s hands, rendering a crucial moment — when she recognizes and acts upon the latent value of the object — less visible. Somewhere on the spectrum from delicate ethereality to concrete worldliness between Jimmie Durham’s political readymades and Sarah Sze’s accumulations in wire, the centerpiece of “BLOWOUT” is a series of stacks of Mylar boxes — “Pet Co.,” “Seasonal,” “Closet (fur),” “Closet (jacket)” — grouped across much of the exhibition floor. Contained within and placed on top of these boxes are carefully chosen small objects, such as toys, rat skins, and wrapping paper. In these boxes, the hand that replicates and the hand that points are joined by the hand that creates and the hand that tears apart. The hand-folded boxes are filled with remnants of childhood (toys with innards exposed), remnants of presents packed with care (tissue paper), and remnants of parties thrown and slept off and forgotten (tinsel). The curatorial text describes the artist’s practice as the dramatization of the relationship between objects, but “dramatization” seems more Hollywood blockbuster than the glow of silent history that emanates from these Mylar vitrines. 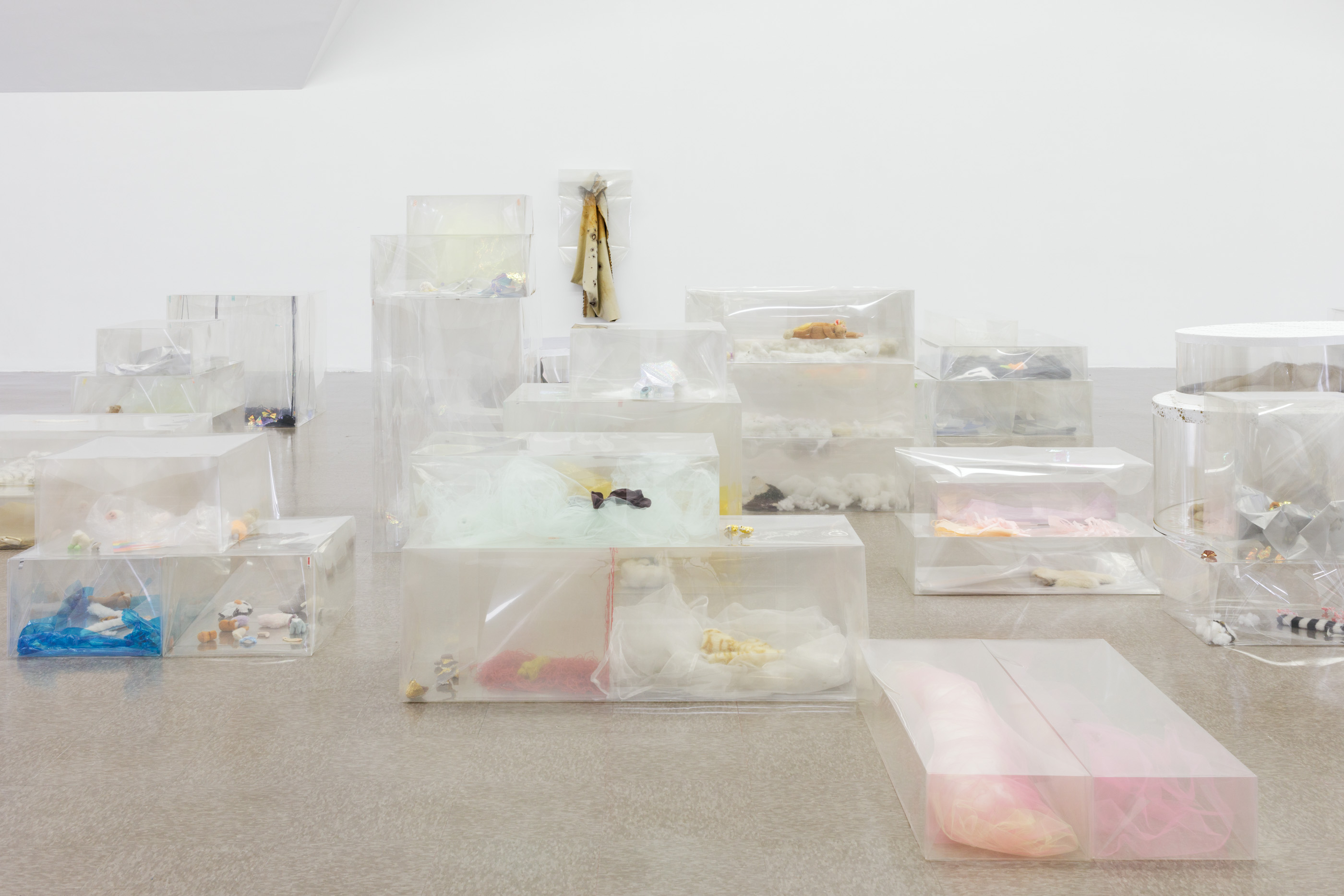 Though the entire exhibition is invested in the artist’s touch, the no-touch covenant of the gallery remains in place for the viewer. Nevertheless, to test whether the wrapping paper resting on the top of one box was its original self or a replica, my friend and I blew on the artwork. Our breath traveling through the air was the most we could make physical of our own fingerprint on the wrapping paper’s history. It moved.

In the curatorial text, Magor describes the exhibition title, “BLOWOUT,” as the end of a cycle where everything is let go, arrived at through witnessing a flower expelling its seeds: “Nothing, something, a huge something (the flower), and then nothing again.” Perhaps the most literal rendition of this overflow is found in “Delivery (Red),” “Delivery (Brown),” and “Delivery (Siena)” — three works that cascade from the ceiling in a tangle of yarn and other textile debris, each terminating with a silicone monkey who holds a garment bag that in some cases spills forth further material. The tangle of fabric and monkey and textile could be somewhat repulsive to an organized mind, but it too is the result of the cycle of love and wear and giving-in to entropy that is present throughout the show.

In her accompanying essay, writer Sheila Heti observes that the objects Magor selects have a past we’re not privy to, and the past participants in the object’s life are also not aware of us as viewers. Heti discusses this idea in the context of the installation piece “Shoe World,” a low semi-circular plinth on which 32 pairs of second-hand shoes sit inside customized boxes: We will never know the previous owners of these shoes, and they will never know us. Magor chose the shoes for being what she describes in the catalog as “great examples of the near-miss” — a pair of heels whose toe seems just a tad too pointed, a pair of slightly over-decorated slippers: items replicating fashion trends but not quite succeeding in their replication. This attempt and failure, alongside the artist’s loving coffins (a term she would likely object to), places the shoes in a sympathetic role; they become characters who have done their best in all their lifetimes, but they ultimately remain their imperfect selves. 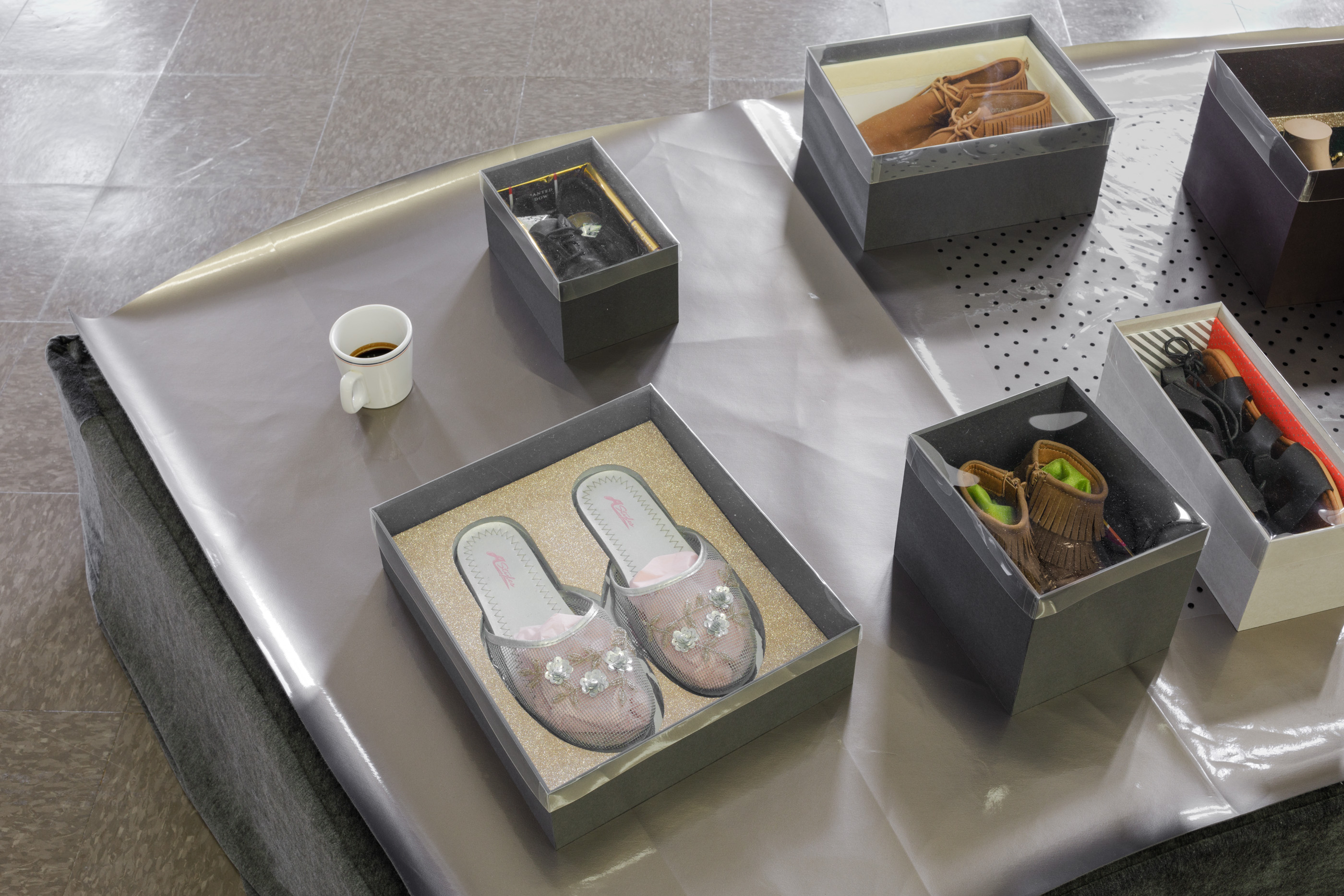 The curatorial text describes the artist’s gathering of found objects as akin to how fragments are gathered for a story: “A collection of tiny intense narratives” that form a web of relationships between objects imbued with feeling and history. On the far wall of the gallery, “Toolshed (Woodstain)” was a blanket in a past life but is now riddled with holes. It bursts out of its Mylar box to hang down the wall. Though all the works displayed have the ravages of time on view in one way or another — from the fashion of the shoes to the stuffed toys whose entrails have been dragged out of them — these holes, begging to be patched, seemed to me the most vulnerable, as if the blanket were still breathing and could be resuscitated if I intervened soon.

A ceramic coffee mug resting on “Shoe World”’s plinth was, according to a docent, a last-minute addition. An assistant had rested it there during install and the artist decided it should remain. One of the most living objects present, the coffee evaporates and has to be topped up weekly. Once again, my friend and I blew on the artwork to see if the coffee would move. It did, and we were simultaneously disappointed (it is only what it is) and glad (it is what it is).

Magor’s strength lies in her ability to recognize the extraordinary in an ordinary material and share that vision with the viewer. It took this viewer a decent chunk of time with the installation, going home to read around it and Magor’s practice, and coming back to look and look again, to trust the sincerity of the artist’s vision. However, the effort offers significant rewards. Magor invites the viewer to invest in the glow of her objects; accepting this invitation, I find myself rewarded with the thrill of the investigation, moved by the objects’ vibrancy, and in awe of the galaxies contained within the material world beyond the exhibition’s doors. 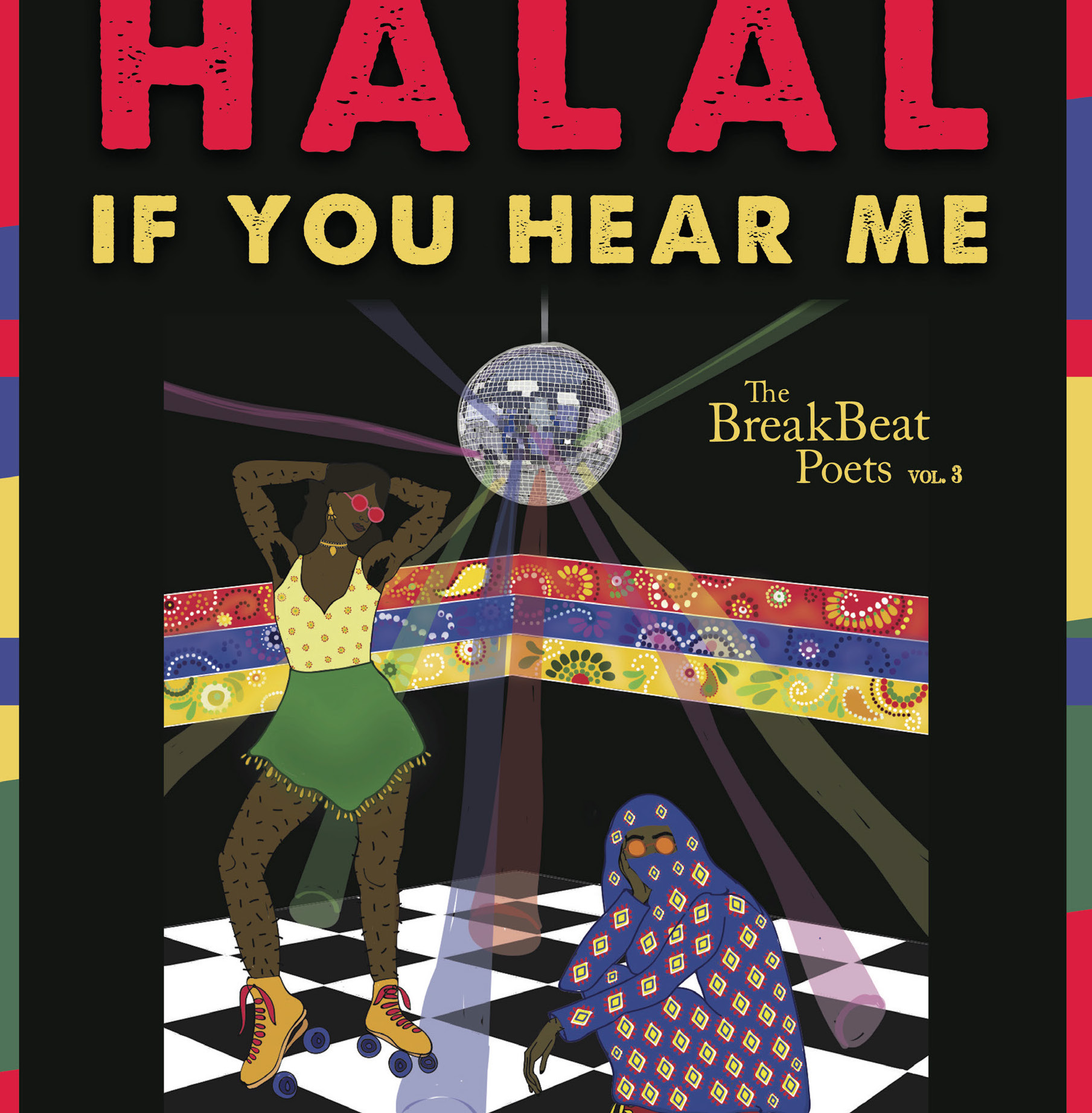