“How to Dig a Hole Outside Itself” is a Collaborative Expansion 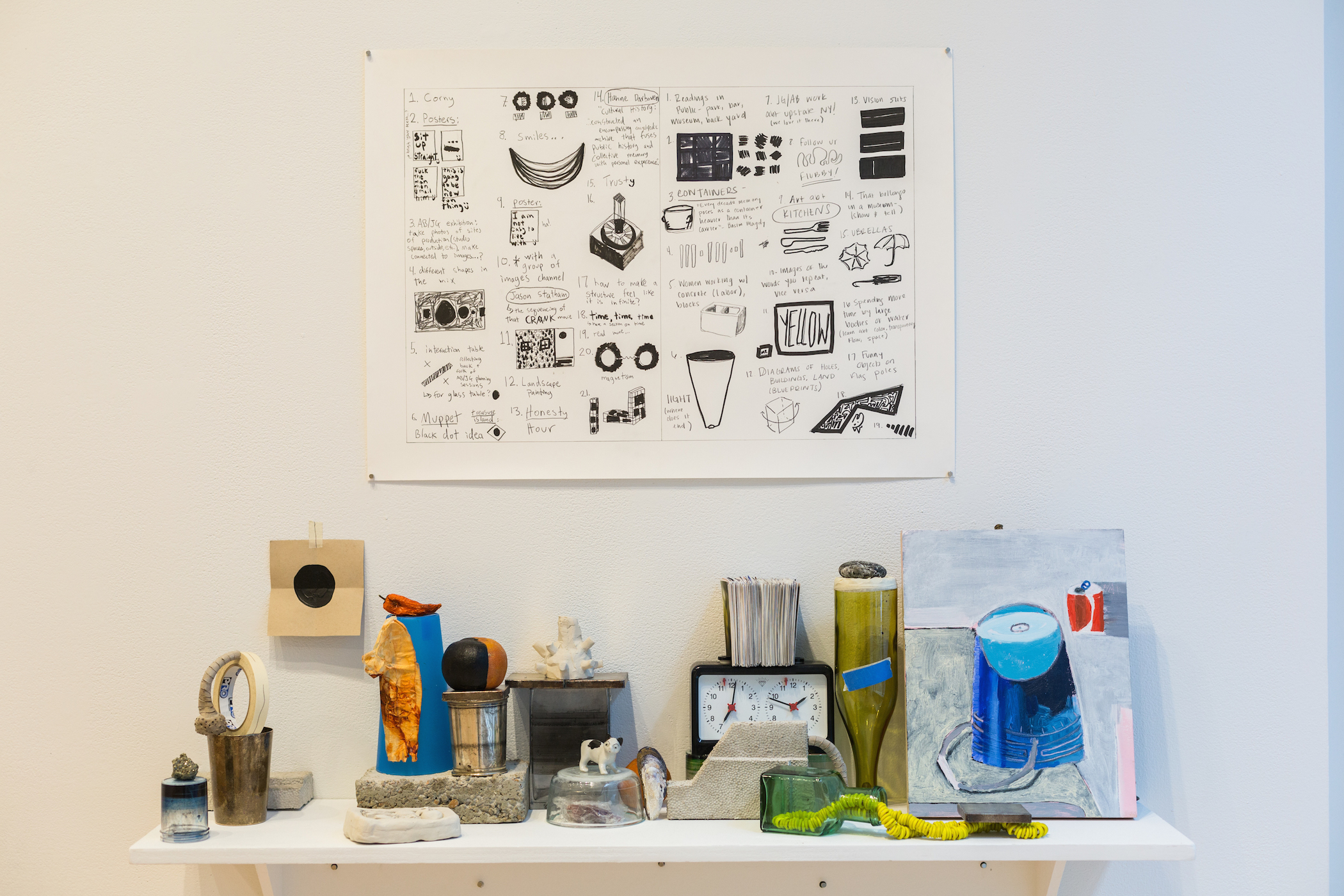 As I stepped into the SITE Galleries opening reception for “How to Dig a Hole Outside Itself,” I was surprised by the sheer amount of work on display. Pieces were everywhere: placed high on the wall; almost touching the ceiling; generously spread out on the floor. There was a lot of color, too: bright yellows, reds, blues, a few glimpses of green — even white felt less like background and more like color in the works that were on display.

Unframed and held up on the wall with small magnetic circles, each print was a detailed composition of a wild idea that had been doodled, sketched, and painted. Using an assortment of media from acrylic paints and digital photographs to graphite, collage, and colored pencil on paper, Jasper Goodrich (MFA Printmedia) and Alden Burke (MA Art History) have sparked a conversation about the benefits of sharing ideas.

Process, ideas, inspiration, critique, feedback, profound words, and provocative imagery usually find their way into our notebooks. Scribbled into the margins, hastily saved as a note or sent as a text message, artists salvage the different inspirations they find for their work as they go about their daily lives. “Idea Chart: AB + JG 2/Paintings” (2018) is one example of a conversation two art students might have. Reminiscent of a mind map, “Idea Chart” can take the viewer in any direction they choose.

I heard someone next to me whisper, “This is just like his studio, typical Jasper. He has artwork put up everywhere.” I have not had the opportunity to visit his studio, but here is what Burke had to say in a Facebook status that announced the show: “The first time I did a studio visit with Jasper, I was left with a specific feeling: light, energized, alive, and excited about all of the amazing people and opportunities I was suddenly surrounded by.”

In a personal statement on the Printmedia Department website, Goodrich talks about building an archive of his ideas and daily inspiration: “The archivist in me says to inventory these ideas. I will create a large set of tags/keywords for each idea. Maybe even 50 tags. They could include categories such as landscape, figure, funny, sad, composition, formal, color, and on and on. So, if I ever wanted to make a painting about a sad figure in the landscape with a formal composition and hints of pink, I could search just that and a list of ideas would appear.” “Ideas to Objects” (2018) is a selection of objects placed on a shelf with another visualization of a list on paper using graphite and markers placed above the shelf. It’s an example of an exchange of ideas between Burke and Goodrich. 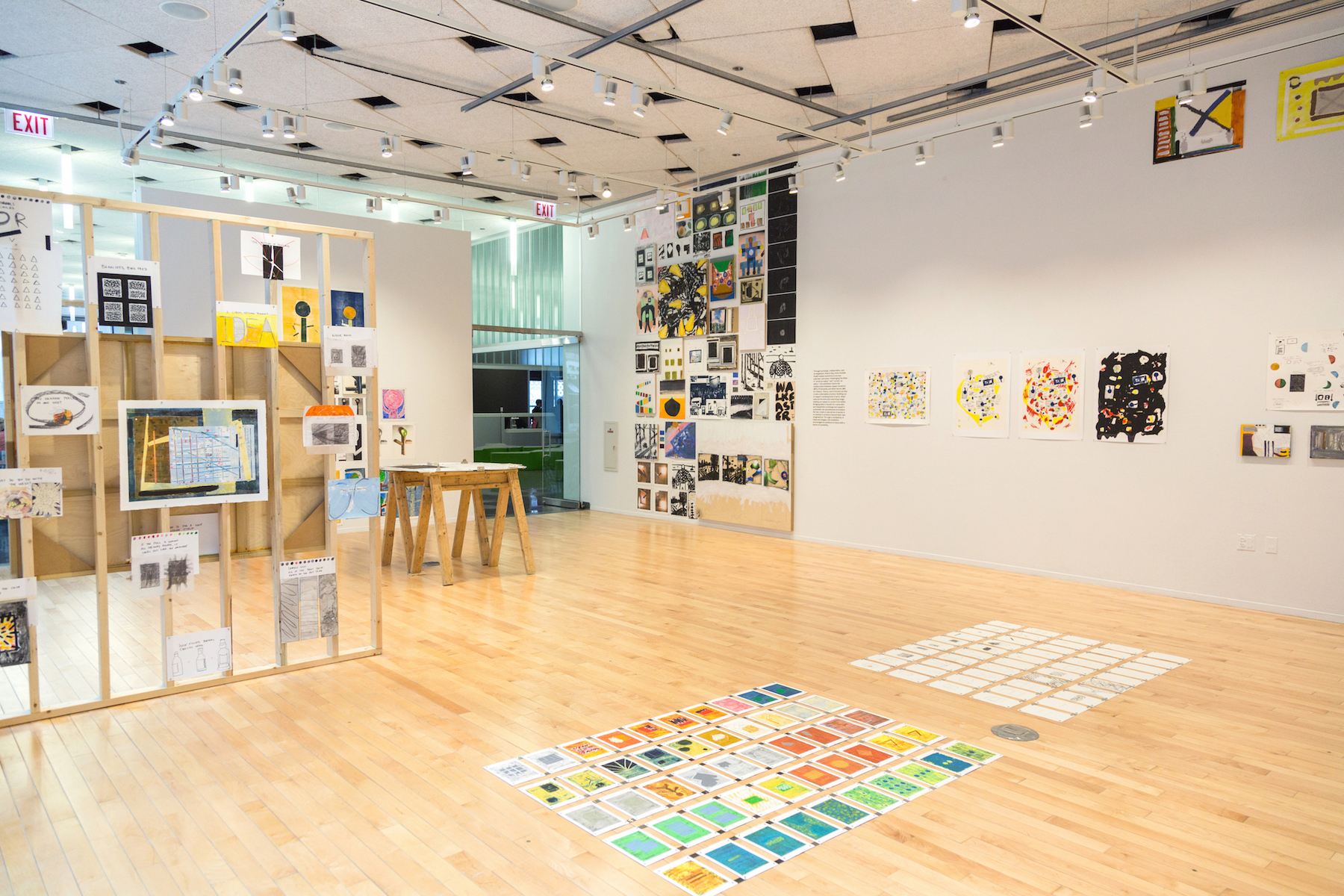 In this show, Burke is offering Goodrich a new pair of eyes; in exchange, Goodrich offers Burke collaborative reign. Together, they have created a new series of works that invite viewers to participate. Goodrich’s work is a (great) hot mess of textures, colors, prints, shapes, and patterns. “Family Tree” (2018) is a thorough exploration of the concept of a family tree both as a physical representation on paper as well as a concept in itself. By assembling his prints using an array of mediums, from Xerox to oil paint, Goodrich recreates the shape of a tree.

Meanwhile, Burke’s academic interests lie in “the parergon as a framing device in conceptual and performative practices.” Her interest as an academic pushes Burke to parse out Goodrich’s vast archive of ideas and stored inspiration from which she curates the show. Challenging the traditional role given to curators, Burke took on a more participatory role. Burke didn’t simply curate, she made her own art in collaboration with Goodrich.

The more I looked at the works at SITE’s “How to Dig a Hole Outside Itself,” the more I saw the endless possibilities each work presented. Each piece forced me to reflect on the relationships I share with artists and the different ways they play out in the work. It makes a person wonder how all those conversations, critiques, friendly banter, or even emails play into every artist’s process.

“How to Dig a Hole Outside Itself” is no longer on view. 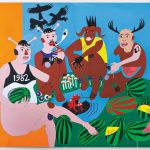 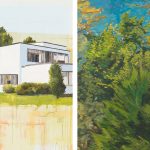