In Orlando’s Shadow: Exuberance and Unease at Pride Fest 2016

A photo essay on this year’s kickoff of Chicago’s annual Pride Festival.

Less than a week after the tragic murders at a gay nightclub in Orlando, Chicago’s 47th annual Pride Fest kicked off in Boystown.

In a public statement following last week’s devastating attacks, Chicago Mayor Rahm Emanuel said, “We will not be intimidated by those who use fear and violence to attack our most fundamental values of inclusiveness and community.” The city also promised a more robust and visible security presence, and local news outlets trumpeted the same. Nevertheless, security measures seemed lacking over the two-day festival.

Very few uniformed officers were immediately visible, however. There were teams of two officers stationed near the north and south exits, near the center point of the festival, and two more officers stationed at a folding table under a tent bearing a banner reading “Command Post.” Those officers, however, were mostly occupied with chatting or using their mobile phones.

To be sure, there were bag checks at each entrance, but they were momentary and cursory. Entering and leaving the festival several times each day, it was clear that the checks took less time the later it got — the workers may have grown tired over time. The efficacy of this security theatre spectacle — which lacked pat-downs — was dubious.

Friendly people backstage, unaccompanied by security officers, allowed press people backstage in performance spaces. There seemed to be no uniformed security officers or police officers minding backstage areas. As each night wore on, the backstage areas got increasingly crowded as friends and friends of friends filtered in, dancing and socializing on the side — or even directly in front of — the stage. On several occasions, people with cameras but no visible press credentials simply pulled apart metal barriers and walked into nominally restricted areas unopposed.

Private security officers broke up a few fights and peacefully escorted offenders out of the festival without additional violence. But clearly, certain important details went unattended.

And while several moments of silence were held to commemorate the victims of the Orlando shooting, there was little fear to be felt on Halsted Street over the weekend. The event was exuberantly festive. DJs and live music acts entertained the wildly dancing crowds, along with the expected summer offerings of elephant ears, hot dogs on sticks, and margaritas in hollowed-out pineapples.

Still, it was not hard to notice an underlying feeling of unease. Many performers exhorted the crowd to be proud, to love one another, to be peaceful, and to enjoy their lives to the fullest. One DJ’s cries, though, fell flat: As the festival neared its conclusion on Sunday night, a DJ encouraged festival-goers to not be fearful after Orlando, because, as he put it,  “This is America!” Not everyone in the crowd responded with enthusiasm. Most notably, a group of African American revelers in the front stopped dancing and fell silent for a few moments, looks of disappointment on their faces, as if they had been reminded of something unpleasant. 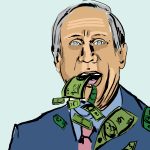 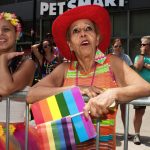