Female vocalists are leveling up, and it’s about time. 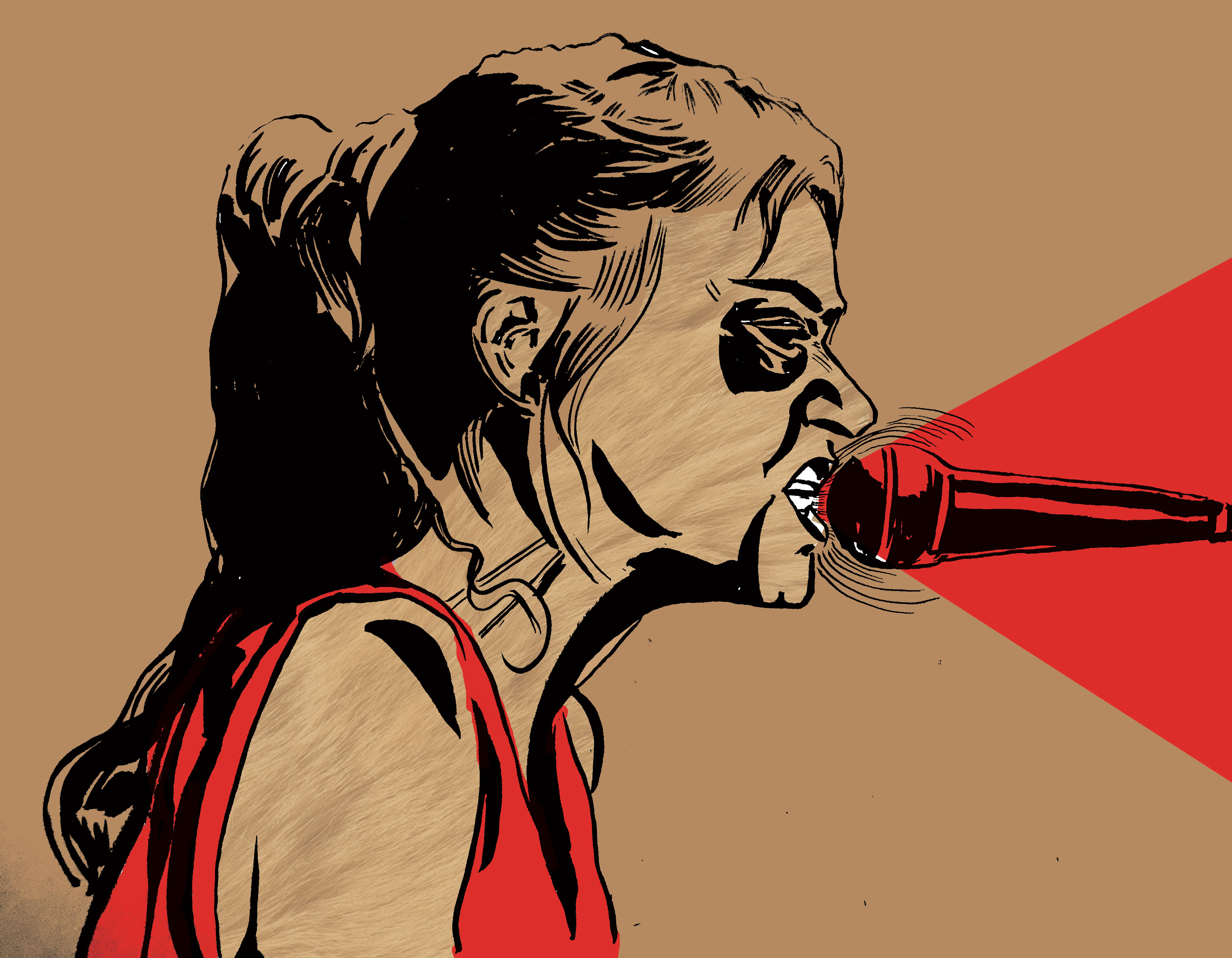 At a recent concert at Thalia Hall, Frances Quinlan, the lead singer of the band Hop Along scream-growled into her microphone. With her neck expertly bent, she looked and sounded a little like a machine. Her voice undulated between a sweet-nightingale lilt, a barely-there whisper, and metal-worthy bars of rasp. It was like watching a contortionist, but with your ears. Before the encore, my concert-going companion, awed, said, “Frances Quinlan’s voice is a national treasure.” Seeing her live, there was no denying that this was true.

Quinlan is one in a recent series of female vocalists who have joined the loud, if marginal, ranks of pop-growlers. I don’t know what else to call them. There are extraordinary female metal singers (Bianca Butthole, Candace Kusculain, Wendy O. Williams) who definitively screech and growl. While they are eminently worthy of worship, I’m not talking about metal. There are modern soul singers (Fantasia, Christina Aguilera, Kelly Clarkson), who, when belting enormous ballads, reach their highest notes with the assistance of a gorgeous rasp. I’m not talking about that either.

I’m talking about that thing you hear in the opening bars of Janis Joplin’s 1971 cover of “Cry Baby.” The opening three “notes” — an impossible ascent of “ohhh, ohhh, ohh” — break every rule that pretty and feminine voices were supposed to follow at the time. It’s not because Joplin can’t hit the notes — her natural range is demonstrably wide. Everyone who has ever listened to Joplin’s greatest hits credits her growl to her infamous addictions: hard whiskey, lots of cigarettes, and all the other substances that would ultimately spell her tragic downfall. But there’s more to it than that, of course. There is desperation in Joplin’s voice that screams, “This is a folk song, but I need you to really hear it.”

Joplin has had a few raspy contemporaries — Joss Stone is a good example — but there’s been a noticeable uptick in the presence of the female pop-growl in the last few months, and it’s not only thrilling, it’s about damn time.

Margaret Glaspy’s accomplished debut album “Emotions and Math” owes some of its fresh sound to her formal composition training. In the candy-coated world of pop progressions and flourishy vocal runs, Glaspy firmly rejects the status quo. She includes songs with weird and fluctuating time signatures, and sends her voice on trips that take unusual leaps: She likes to sing sixth or seventh chord progressions, a simple act of rebellion that could go unnoticed by a casual listener.

But the real genius of this album is in Glaspy’s vocals. On each of the twelve tracks on “Emotions and Math,” she gets growly — although she doesn’t do it quite like Joplin. She drops her growls in the form of single notes, dressing up bridges; she hangs them on the ends of gasps and drawn-out syllables. The effect is marvelous. Glaspy’s lyrics alone aren’t the kind of poetry you scribble in your notebook, but coupled with her masterful songwriting and intentional vocals, they ooze with feeling. A gentle song like “Somebody to Anybody,” for example, would fall to saccharine obscurity in anyone else’s hands. Glaspy turns it into a plea; it is at once an anthem and a gut-wrenching resignation — “I don’t want to be somebody to anybody/ I’m good at no one.”

Where Glaspy has taken her perfect, subtle growl into a full embrace, others are cautiously testing the waters. Beyoncé, undisputed queen of raspy-but-controlled belting, intentionally loses control in the big ballad on “Lemonade,” “Sand Castles.” It’s a breathtaking song that halts the album and demands that you listen — Beyoncé isn’t fucking around; this shit hurts. Likewise, Rihanna lets herself off the chain on the penultimate track on “ANTI;” she pushes her voice to its emotional limits with a short, orchestral torch song called “Higher.” Incidentally, it’s the far-and-away best track on the album.

Perhaps most surprising is pop-folk singer Esmé Patterson’s first single off “We Were Wild,” an uncharacteristically upbeat little track called “Feels Right.” Patterson, who fronted the sickly-sweet harmonic six-piece Paper Bird, was born with the natural voice of a human angel. To hear her voice shout and rasp, albeit cautiously, is a thrill. The rest of the album is lovely and quiet, though ultimately forgettable. But mark my words: “Feel Right” will endure.

Hop Along’s Quinlan, however, is the unquestionable master of the pop growl. The band’s growing prominence (they played a Tiny Desk concert at NPR last year) may be influencing up-and-comers. Quinlan proves that a song doesn’t have to be a ballad to merit a growl; she screams and rasps through even the band’s most up-tempo tracks. National treasure, indeed.

Women are supposed to sing sweetly, to control themselves.

And the growl matters. For men — James Brown, Steven Tyler, Louis Armstrong, and a limitless bevy of others — growling is often about sexuality and power. Male vocalists who are proficient growlers give off an air of uncontrollability and simultaneous not-giving-a-fuck. Men are supposed to growl. They are leaders; they are mess-makers; they are influencers. They are one electric guitar away from being lions.

Women are supposed to sing sweetly, to control themselves. When female pop singers throw caution to the wind and refuse to polish themselves off, they’re stepping into an arena that traditionally hasn’t belonged to them; and because the risk is higher, it means something different when they do it. When Fiona Apple emitted her snarly growl in 2012’s “Regret,” it felt like she was finally saying something she’d been trying to say for her entire career. You can hear her pain; you can feel her falling apart. Apple has spoken candidly about how her music has never been for anyone but herself. In “Regret,” she patently refuses to give; she takes.

This is important because women need to see other women breaking artistic rules. It is high time for realistic emotional representation. We don’t always quietly mourn our losses while taking care to keep our mascara from running; sometimes we scream and growl and hurt out loud. Not only is that okay, but it’s totally beautiful. There is a popular notion that emotions only get in the way. This idea is absurd, outdated, and desperately needs an overhaul. Pop music is just as good a place as any to start.